57 years to the day, the eldest of MLK Jr.'s living children stood in the very same place where his father shared his dreams, to continue his father's work. 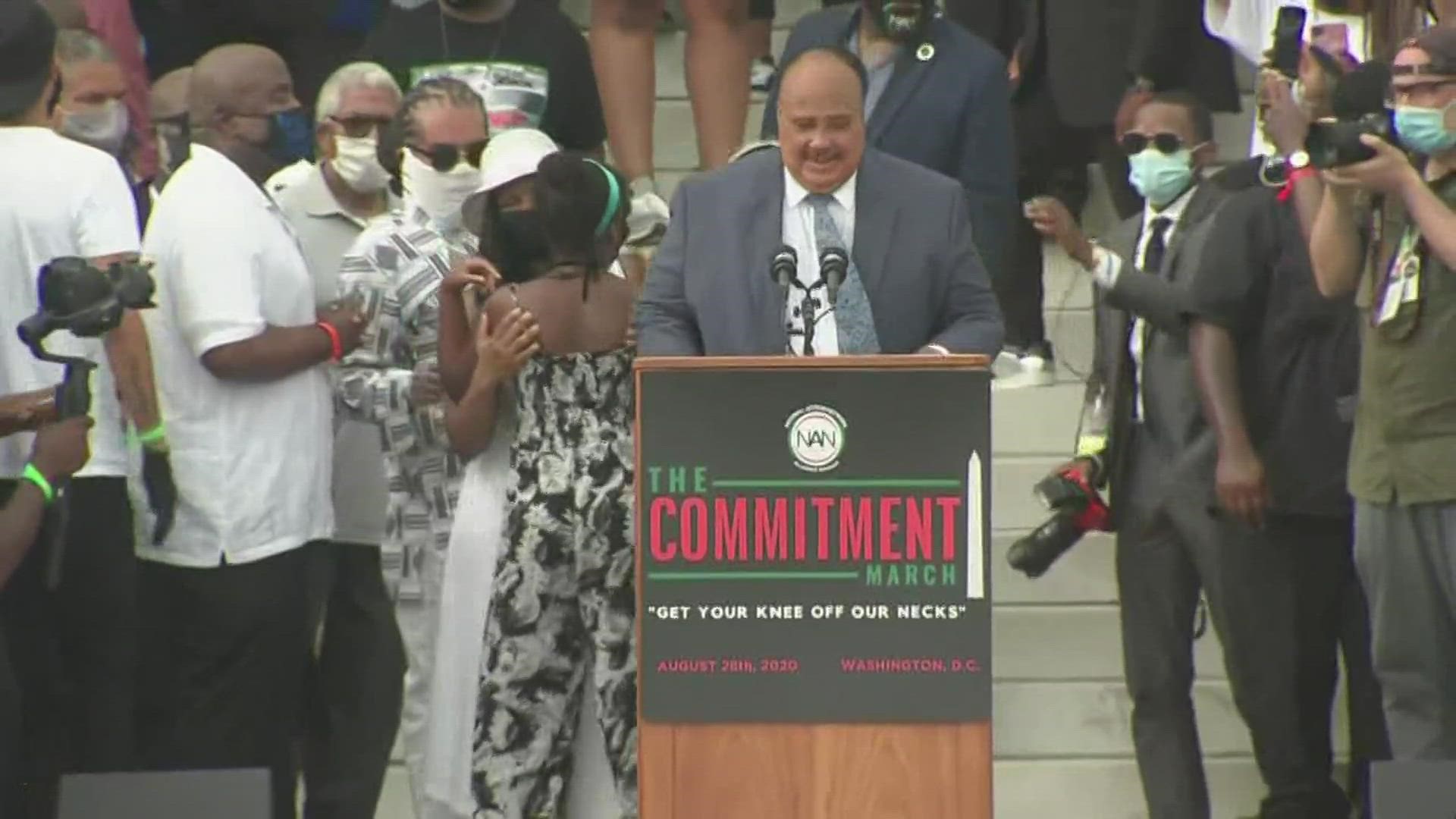 WASHINGTON — In front of a crowd of more than a quarter of a million people, Martin Luther King Jr. stood on the steps of the Lincoln Memorial and delivered a speech that would become the rallying cry of the civil rights movement.

"I have a dream," King famously declared, "that my four little children will one day live in a nation where they will not be judged by the color of their skin but by the content of their character."

Fifty-seven years later, to the day, the eldest of King's living children stood in the very same place and implored America to finish his father's work. Martin Luther King III looked out on the mostly-masked crowd lining the Reflecting Pool and pleaded with the audience "to remember from where we've come and to carefully consider where we are going."

"We are taking a step forward on America's rocky but righteous journey towards justice," MLK III said. "Aug. 28 is a day to remember the triumphs and tragedies that have taken place in our historic struggle for racial justice. Today we commemorate the March on Washington in 1963 where my father declared his dream. But we must never forget the American nightmare of racist violence exemplified when Emmitt Till was murdered on this day in 1955 and the criminal justice system failed to convict his killers." 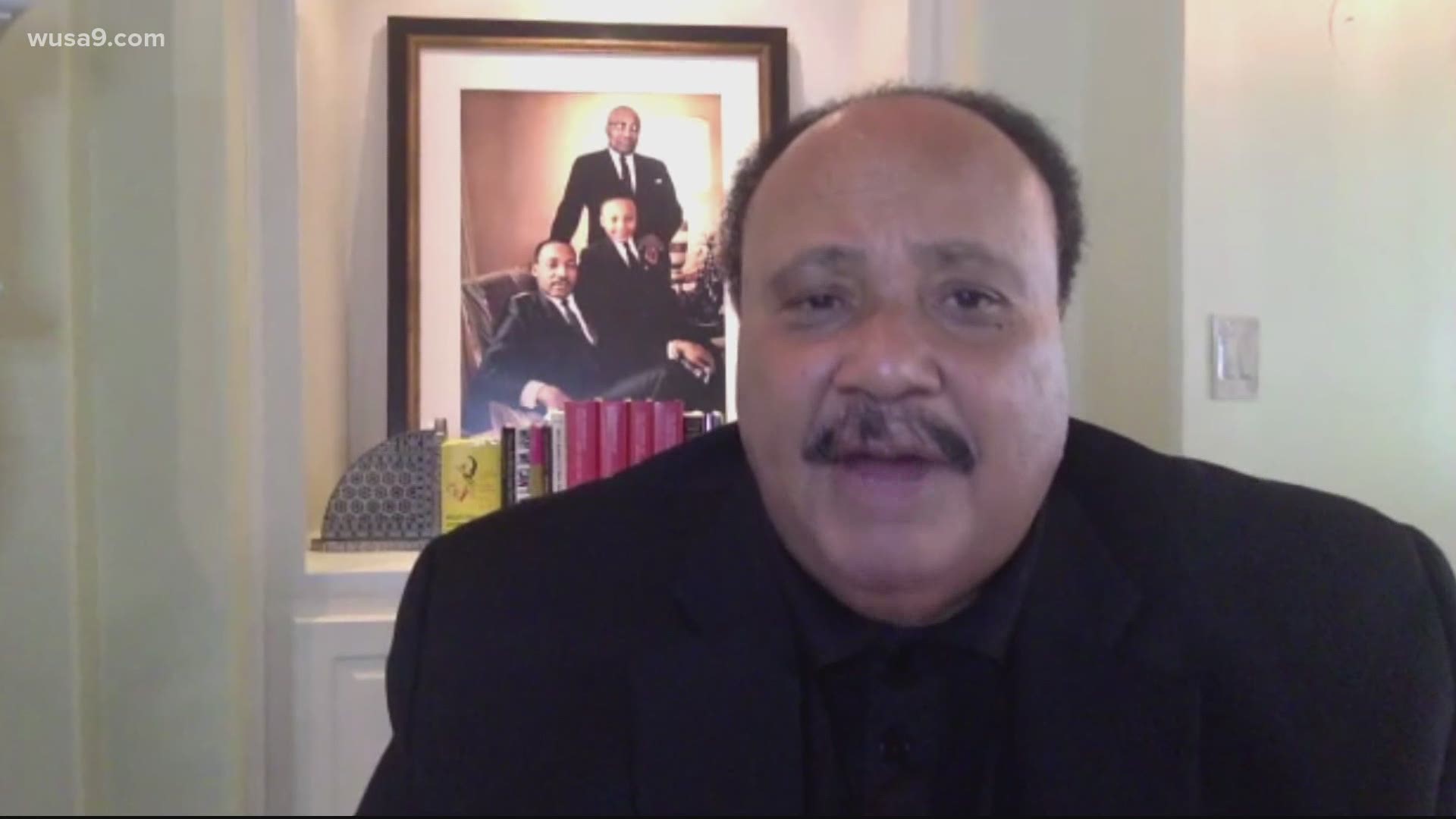 MLK III shared both his frustration at the lack of lasting change between his father's march and his, and the signs of progress in which he has rejoiced.

"In our struggle for justice, there are no permanent victories," MLK III said. "For on this day 12 years ago I was honored to address the DNC in Denver ... Our spirits were soaring as the Democrats nominated Barack Obama who would go on to become the first African American president of these United States. But the progress we celebrated then is in peril yet again. And now we must march to the ballot box, and the mailboxes, to defend the freedoms that earlier generations worked so hard to win."

He called the current March on Washington the largest movement for civil rights since the 1960s.

"In so many ways we stand together day in the symbolic shadow of history, but we are making history together right now," MLK III said. "We are marching with the largest and most active multi-generational, multi-racial movement for civil rights since the 1960s. From high school students to senior citizens, black as well as white, Latino, Asian-American, Native American, Pacific Islanders. Americans are marching together, many for the first time, and we're demanding real, lasting, structural change."

The grave fact that the march was taking place amidst the national backdrop of a pandemic disproportionately killing Black and brown Americans was not lost on MLK III.

"We are courageous but conscious of our health," he said. "We are socially distanced, but spiritually united. We're masking our faces, but not our faith in freedom."

MLK III said the same challenges presenting society today are what his father called the triple evils -- poverty, racism and violence -- and proclaimed that those evils had exacerbated four major challenges facing the country now:

"With all these threats to our lives and liberties, our challenge is to use this moment to expand this movement," MLK III said. "A movement that not only raises his voice, but casts his votes, pursues his vision and makes lasting change."

He expressed his vision for America as one where the triple evils would be replaced by peace, justice and shared abundance, and where hate and fear would finally give way to help and love.

"To achieve that America, we need to raise our voices and cast our votes ... as if our lives and our livelihoods, our liberties depend on it because they do," he said. "No people are more keenly aware of the risk of disenfranchisement than those who've suffered from it. There's a knee upon the neck of democracy, and our nation can only live so long without the oxygen of freedom."

MLK III put out a call to any individual capable of doing so to drive those who need it to the polls, and for organizations who care about democracy to offer their resources to ensure all ballots are counted.

Ultimately, MLK III shared his own dream that in 50 years his granddaughter would not be standing in his shadow once again asking for equality, but would instead be praising an America that had once and for all eliminated systemic racism.

"The nation has never seen such a mighty movement, a modern-day incarnation of what my father called the coalition of conscience," MLK III said. "And if we move forward with purpose and passion, we will complete the work so boldly began in the 1960s." 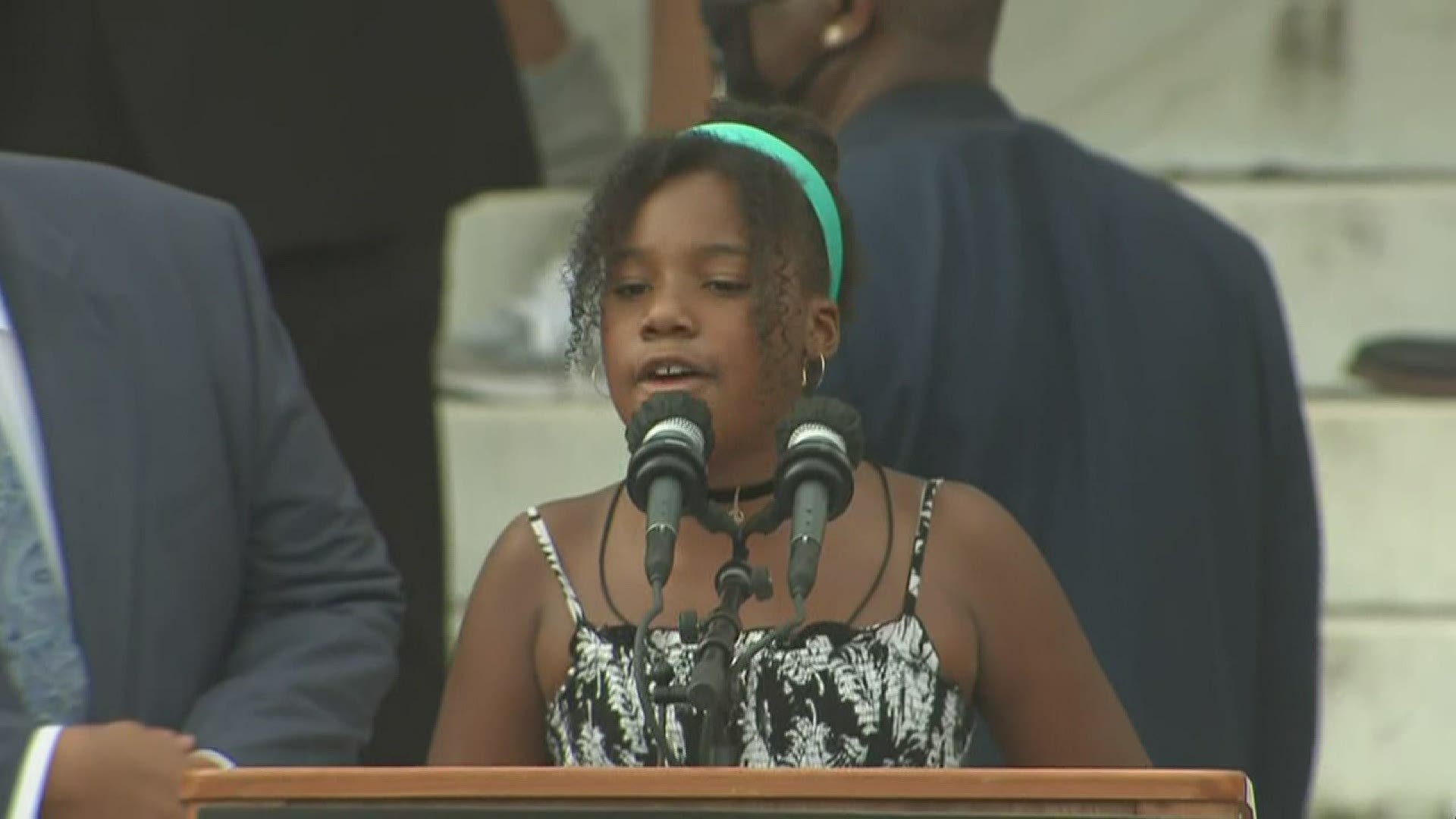 MLK III was introduced by his 12-year-old daughter, Yolanda Renee King, who called upon her generation to move beyond the selfies and TikToks to "master ourselves."

"Less than a year before he was assassinated, my grandfather predicted this very moment," Yolanda said "He said that we were moving into a new phase of the struggle. The first phase was the civil rights, and the new phase is genuine equality. Genuine equality is why we are here today, and why people are coming together all across the World from New Zealand to New Jersey."

The precocious 12-year-old ended her introduction with a promise to her late grandfather.