Our Q and A team looks into the claims made by Senators on day one of Amy Coney Barrett's Supreme Court nomination hearing. 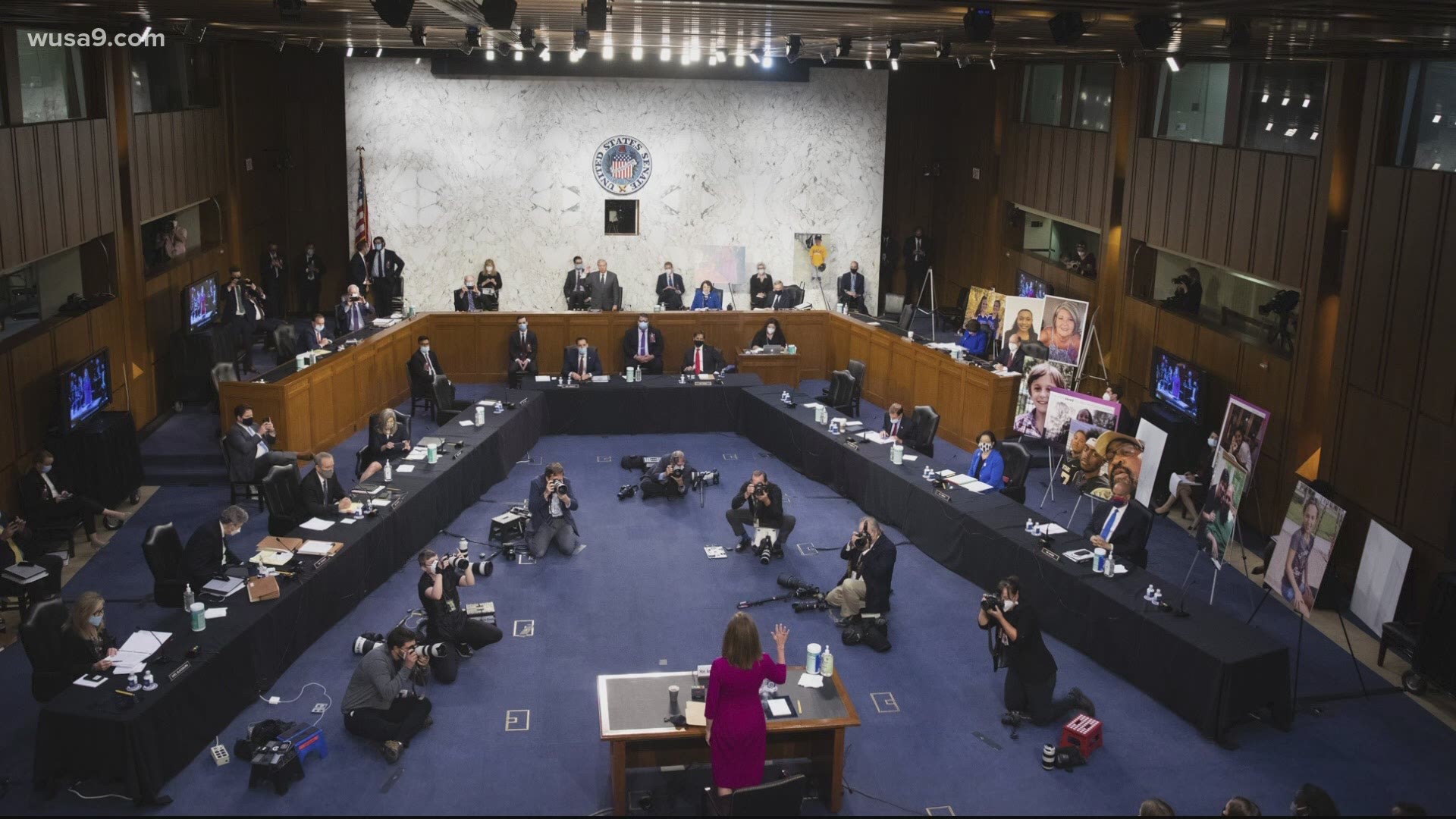 WASHINGTON — Supreme Court nomination hearings for Amy Coney Barrett started Monday at the Capitol. During their statements, Senators made claims on topics from the Affordable Care Act (ACA) to jobless reports and voting history for prior Supreme Court Justice nominees.

Our Q&A team is digging into what was said.

Let’s start with Sen. Sheldon Whitehouse’s (D-RI) claim about protections for people with preexisting conditions under the Affordable Care Act and how people who have contracted COVID-19 could be impacted if the ACA is repealed.

According to Dr. Daniel Fagbuyi, a former Obama Administration Biodefense Advisor, this is true.

"8 million, maybe a little under over, but that notwithstanding, the point is that by having that diagnosis, they now have a medical condition that is pre-existing,"  Dr. Fagbuyi said. "ACA has in place, all the things to be able to cover and make up health insurers to cover pre-existing conditions and provide care to people who have underlying conditions without denying them. Removing that law and guidance there will leave Americans wanting."

The next claim we looked into was regarding the economy.

"We're in the midst of a relentless deadly health crisis that Trump has botched, which touches nearly everyone in this country," Whitehouse said. "Americans are dying by the hundreds of thousands. Our economy is down 10 million jobs."

According to the jobless report that came out earlier this month, just over half the 22 million jobs lost to the coronavirus have been recovered, leaving the economy with 10.7 million fewer jobs than in February. So that claim holds up.

However, it’s important to note that those jobless numbers didn’t include the airline company furloughs that impact tens of thousands of Americans nor the 3,800 layoffs by Allstate.

Many of the statements from Democratic Senators spoke to concerns about the rush to confirm Judge Barrett before Nov. 10, when the court will rule on California vs. Texas regarding the future of the ACA. But according to Ilya Somin, law professor at George Mason University, if confirmed, Judge Barrett’s vote won’t have a big impact on the ACA.

"I think actually she would probably have very little impact," Somin said. "There are two main issues in the ACA case currently before the Supreme Court. One is whether what's left of the individual mandate is now unconstitutional."

3/4/15 9:01:50 AM -- Washington, DC, U.S.A -- The U.S. Supreme Court will hear oral arguments on King vs. Burwell. The King vs. Burwell case will decide whether the language of the Patient Protection and Affordable Care Act allows consumers to receive premium subsidies in states that have not established their own exchanges and instead are relying on HealthCare.gov. -- Photo by Jack Gruber, USA TODAY Staff ORG XMIT: JG 132687 ACA SCOTUS 3/4/2015 (Via OlyDrop)

He said this is up for a vote because originally the Court upheld it as a tax back in 2012, but since the Republicans removed the monetary penalty associated with it in 2017 he said "it's very hard to argue that it can be a tax anymore because it doesn't raise any money."

"There's a good chance that the Supreme Court will rule that in fact is no longer a tax or can't be considered a tax, and therefore is unconstitutional," Somin said.

If the Supreme Court rules that the tax on people who don’t have health insurance is unconstitutional then does that mean that the rest of the law regarding the Affordable Care Act also has to go because it can't be severed from the mandate? Somin says, based on precedent set by a Supreme Court ruling on robocalls a few months ago, he doesn’t think so.

"In the robocall case the notion was that there's a very strong presumption in favor of severability there," Somin said. "That is that if one part of it was unconstitutional, the strong presumption is that that will be eliminated but the rest will stay unless there’s overwhelming evidence that it's so important to the rest of the law, that it just can't function without it."

"So even if Amy Coney Barrett supports the plaintiff's position on this, of the red states that are suing, her vote won't be enough to put them over the top and it's far from clear that she will in fact support it."

Somin, however, argues there are more important things to worry about right now than whether Barrett’s confirmation could impact the ACA. He highlighted how Republicans are going back on their arguments against President Obama confirming Judge Garland in 2016, and the concerns that confirmation of Barrett will push the Democrats to resort to court packing as two of his concerns.

RELATED: What is 'packing the court?' The history behind Pence's attack on Biden, Harris