Leading up to the elections in Maryland we want to make sure that you have the information you need to make informed choices. 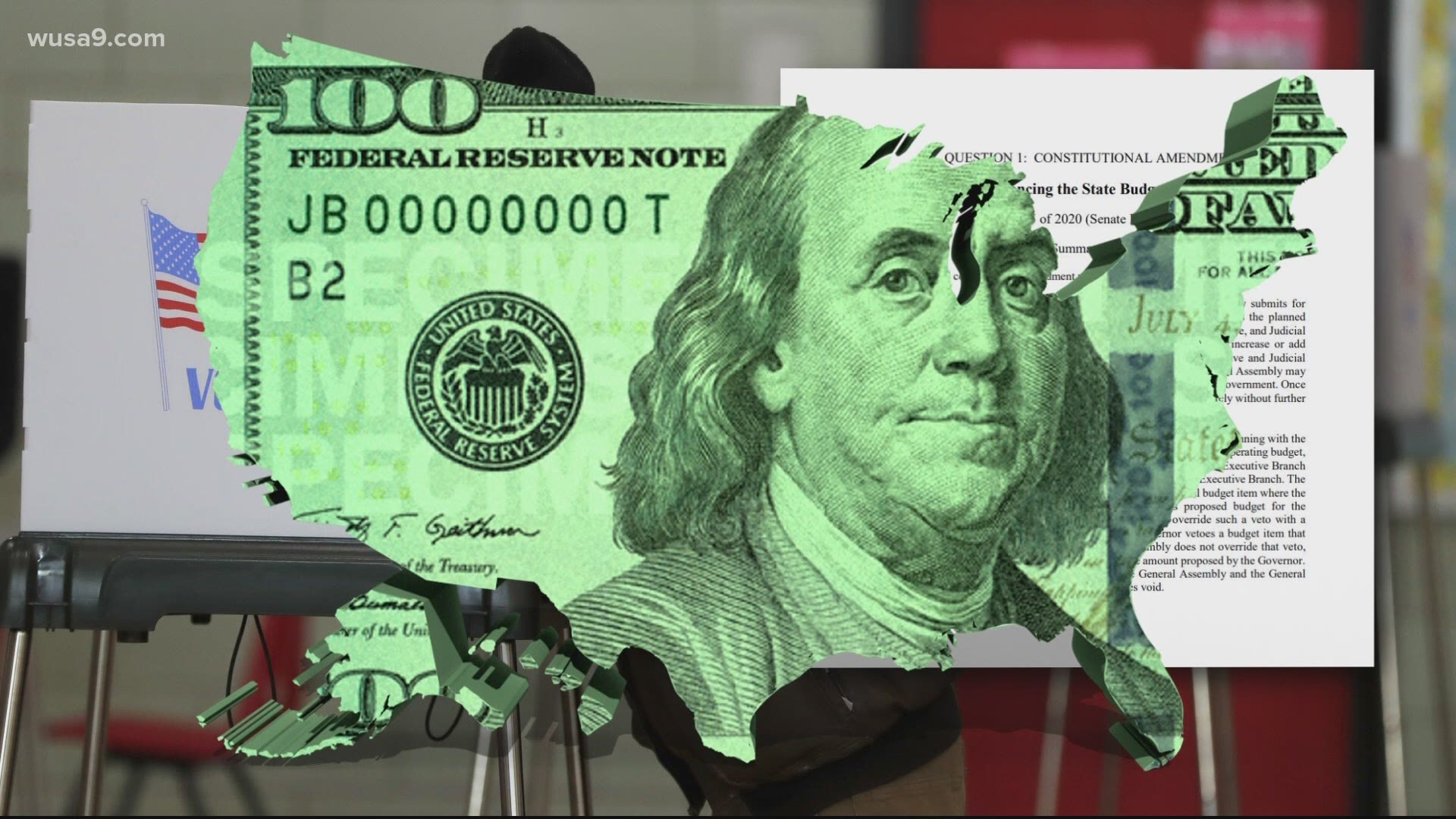 ANNAPOLIS, Md. — There are two questions up for a vote on in the Maryland state election.

"Question 1" deals with redistributing budgeting power within the state and the other authorizes sports and events gambling at certain licensed facilities.

Let’s talk about Question 1 of the Maryland ballot.

Question 1 on the Maryland ballot asks you to decide if the Maryland General Assembly should have the power to increase, decrease, or add items to the state budget as long as those changes do not exceed the total proposed budget submitted by the governor.

Why is this on the ballot?

WUSA9 spoke to a professor of political science and public policy at UMBC as well as a Maryland State delegate about what a yes vote on question one would mean for Marylanders.

"Right now the only way to get proposed spending in the governor's budget is for the governor to do it," says Roy Meyers, professor of Political Science and an Affiliate Professor of Public Policy at the University of Maryland, Baltimore County. "And so everybody has to lobby the governor. That's just one person."

Meyers says that a yes vote on Question 1 of the Maryland ballot would put Maryland in line with all 49 other states, in terms of how they handle their state budgets.

"Maryland is the only state where the governor has this power," said Meyers. "If we were to shift toward the method used by the 49 other states, we would join the other states that have AAA bond ratings just like we do."

According to Fidelity, a financial planning and asset management company, a bond rating is an assessment of creditworthiness. Meaning if someone is looking to purchase bonds from the state of Maryland, our bond rating would let them know if that is a good investment or not.

"We are able to gain that AAA bond rating, in large part because of the wealth of Maryland's economy and the fiscal responsibility," says Meyers. "Responsibility that we have shown in the past, which is not simply due to the governor's actions but to the legislators as well."

RELATED: Hogan may not have the votes to cut $672 million from Maryland's budget

As Meyers explains, the original legislation that passed in 1916, put the budget power solely in the hands of the governor. He says that decision was made because of poor financial decisions by both the governor and the legislature at the time.

"The solution at the time, proposed by some people, was giving only one person the power to control the budget," says Meyers. "And if that person screwed up you would throw the bum out in the next election."

But According to Meyers and as illustrated by the state’s AAA bond rating, Maryland is fiscally responsible now.

Which begs the question — if Maryland is doing well financially, then why should constituents vote to change how the state budget is being handled?

According to Nick Charles, Maryland State delegate for District 25 in Prince George’s County — a yes vote on Question 1 would allow legislators to more efficiently and effectively respond to the needs of their constituents.

"One of the more critical things that we're dealing with right now is rental assistance," says Charles. "This will allow for us to look at those issues and find money, where there are shortfalls and put the money toward rental assistance versus putting that money in other areas that we don't necessarily need to spend the money right now."

Both Meyers and Charles say a yes vote on Question 1 doesn’t reflect upon the Hogan administration nor would it impact them. If passed, Question 1 would not go into effect until the Fiscal year 2022, when the new governor comes in.