Montgomery County ballot: Explaining questions A and B #TheQandA

Early voting in Maryland is just 10 days away and WUSA9 wants to make sure you’re prepared. So let's breakdown what’s on the ballot in Montgomery County. 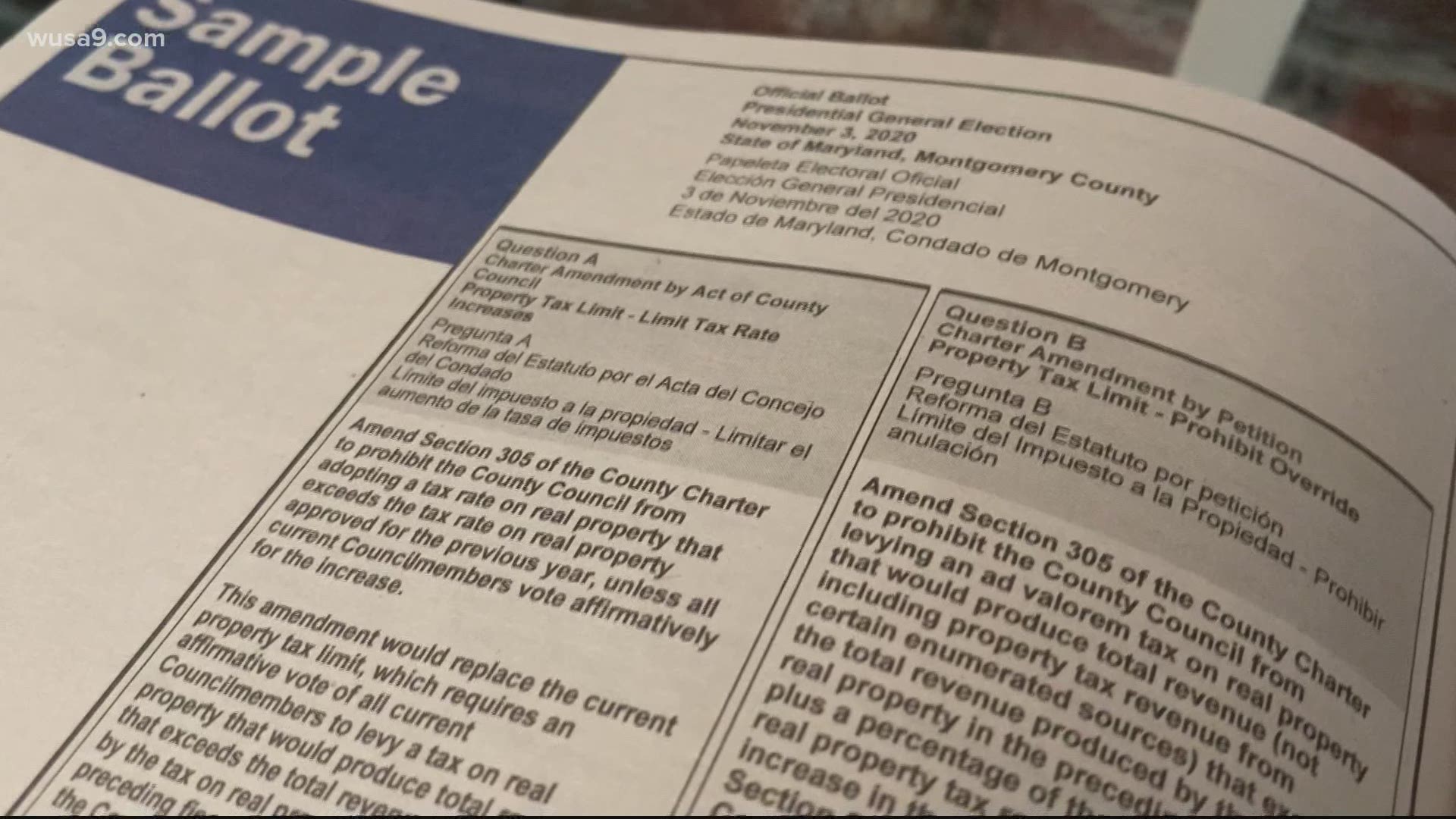 MONTGOMERY COUNTY, Md. — The 2020 election is fast approaching and early voting starts in Maryland on Oct. 26. WUSA9 wants to make sure you’re prepared, so let's breakdown what’s on the ballot in Montgomery County.

There are two topics for the county-specific questions on this year’s ballot in Montgomery County. Questions A and B address property taxes and questions C and D address the number of people on the County Council.

For now, we're going to dive into questions A and B.

Question A on the ballot is backed by the council, while Question B was written by attorney Robin Ficker.

"When property values decrease, the current system allows the rates to increase in order to create the revenue that is equal to the previous year," Councilmember Andrew Friedson said. "So rather than everybody being in the same boat when residents and businesses, struggle the county struggles and a rising tide lifts all boats as it should be. It divorces these two dynamics where the county can raise revenues at a time when residents and businesses can least afford it."

So what would a yes vote on Question A mean?

If passed, this question would do away with the cap on revenue, and instead require that any increase to the property tax rate in Montgomery County be approved by all nine members of the council.

Under the current system, the council must set the property tax rate each year to make sure that the county does not exceed the overall revenue cap.

Will Jawando, Councilmember At-Large, is in favor of Question A, and said the current property tax process is based on what the county needed 40 years ago, when it was mostly farmland). Now, he said it hinders economic development.

RELATED: Nearly $50 toll projected in draft study of I-270 project

"If you ask most people, 'hey, if you build new things and they're taxed or if the value of my property goes up and it's taxed, won't the county be able to use that revenue?'" Jawando said. "The answer's no, unless we vote to exceed the charter cap."

Robin Ficker, the author of Question B, explains it this way.

RELATED: How a Yes vote on Question 1 of the Maryland ballot would impact state finances

The way the charter cap process works in Montgomery County can feel confusing. It’s a series of math equations that accountants understand and hardly anyone else.

But here’s what you need to know.

Friedson said before the pandemic the county was in a very healthy financial position. And even now, the county has a Triple-A bond rating.