Virginia’s election commissioner expressed full confidence in the critical computer system, known as VERIS. It is slated to be replaced in July 2022, documents show. 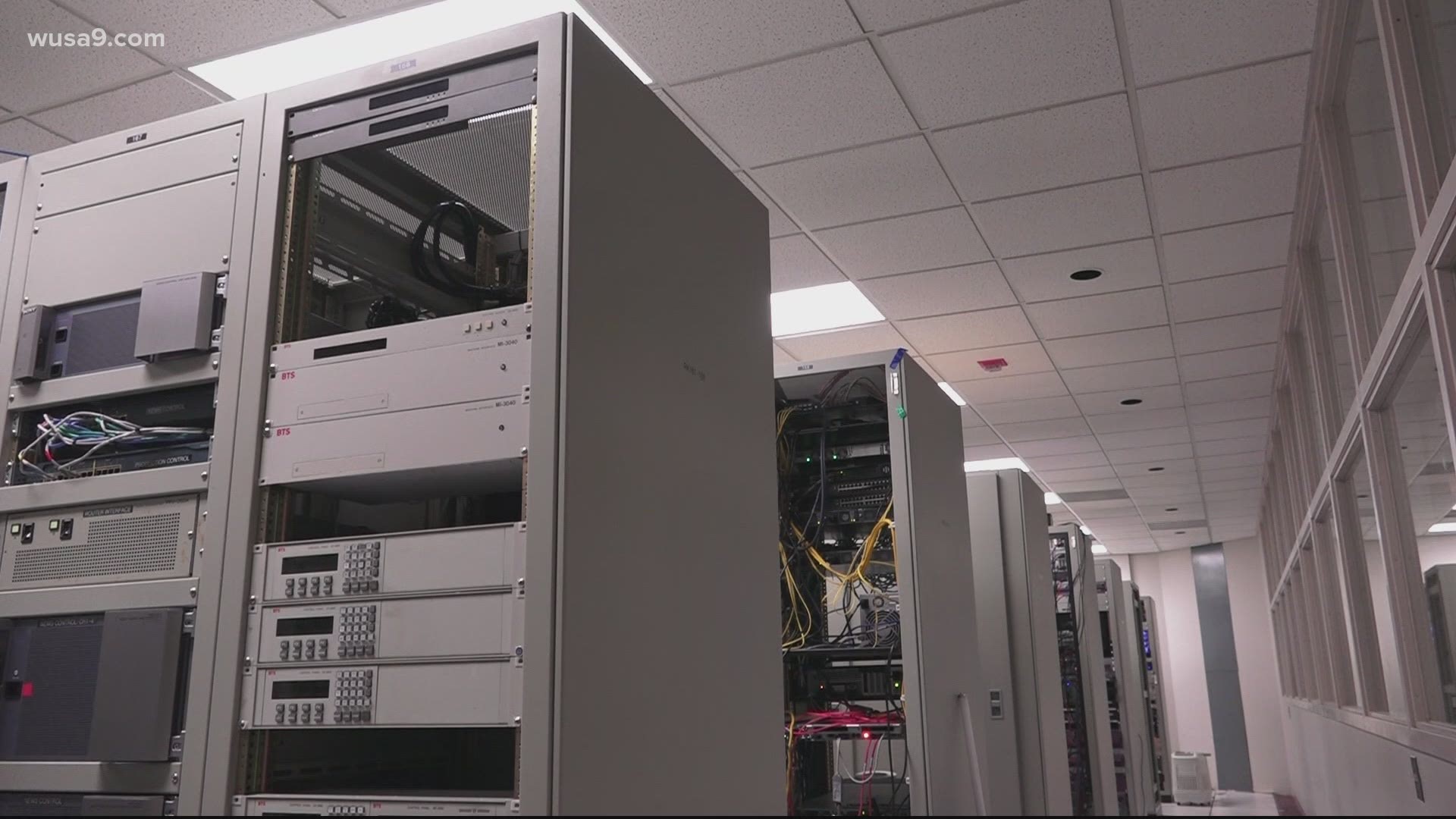 Elements of the Virginia Election and Registration Information System, or VERIS, have already slowed, shown errors, or given election officials cause for concern during the initial days of 2020 early voting in Virginia.

On the first day Fairfax City welcomed voters to cast their ballots for the presidential election, a VERIS computer error prevented the city from immediately uploading the names of those who voted.

The process of identifying who cast their ballot on any given day is essential to protecting against voter fraud, repeat voting, and individuals requesting absentee ballots after already visiting a polling place.

“We’re supposed to be able to connect our poll books into VERIS, and upload everyone who voted that day into the system,” said Brenda F. Cabrera, general registrar of Fairfax City.

“That was not working. Day one of early voting was Friday [Sept. 18, 2020], so theoretically, the most obvious reason for concern, we don't want them to come back on Monday to try and vote again.”

Cabrera was able to devise a work-around to the problem, manually inputting the data of each voter into VERIS. The process took hours, rather than minutes, an incident Cabrera said cannot continue as Election Day nears.

“We didn’t hear anything from the state until Monday morning, more than two days later, that the problem was resolved,” Cabrera said. “It’s an issue reported across the state, and we couldn’t wait to upload these names.”

Virginia Elections Commissioner Christopher E. Piper vigorously defended the integrity of the system, and said Virginians should sleep soundly concerning the integrity of the network. In a wide-ranging interview, Piper staked his reputation on VERIS shepherding the commonwealth through the November 3 election, without failure.

“We've done a lot of work on VERIS, and we've added features and functions to ensure that when VERIS is being used by the citizens and the registrars, that it is in optimal performance,” Piper said.

“The important thing is, is that we currently have VERIS, we feel good about it, and we're going to continue operating with it.”

The commissioner’s sentiment isn’t shared by all who are involved with Virginia’s elections.

In an October 2019 Virginia Department of Elections survey of 235 general registrars, election board members and local staff, dozens of VERIS users pleaded for immediate fixes, with some openly questioning if the network could handle the demands of 2020.

“In terms of VERIS system performance, users seemed most frustrated with the reliability of the system,” the department wrote.

“Respondents mentioned that the system tends to go down or slow down too frequently and at inopportune times. This can cause processing delays and rework. The concern increases as Election Day approaches.”

Earlier this year, the Virginia General Assembly set in motion the process to build an entirely new elections network. But documents reviewed by WUSA9 show a tech firm has not yet been selected to replace VERIS, a step essential for the system’s eventual retirement by July 2022.

The timeline for the system replacement, alarms raised in the 2019 survey, and 2020 early voting issues with VERIS have not been previously reported.

Registrars interviewed over the past week agreed that no insurmountable system failures have happened this year, nowhere comparable to a VERIS crash in 2014 that shut down the state’s results website or an error in 2016 that temporarily halted Virginia voter registration.

But concerns lingered about a system that has failed before, and remains untested against a groundswell of expected record turnout over the next five weeks.

VERIS is the electronic backbone of Virginia’s elections, perhaps the most critical component of voting across the state that Virginians have never heard of.

But perhaps VERIS’s most high-profile function is reporting results on election night. VERIS records every vote cast in Virginia, and displays the results on the state’s election website.

It was a system originally built for Indiana. Virginia requested a modified design and began using what would then become VERIS in 2007.

After significant failures with servers crashing in 2014 and 2016, temporarily shutting down Virginia’s election website and voter registration, respectively, state auditors launched an investigation.

Prepared for the state General Assembly in September 2018, the report concluded VERIS “is not sufficiently functional or reliable,” and strongly suggested the legislature examine replacing the network.

“The system has longstanding reliability problems that continue to slow processing speed during peak usage,” the report said.

“[The Department of Elections] requested and is now receiving from the General Assembly an additional $1 million annually from FY18 through FY22 to improve the system. However, many of the major improvements have yet to be implemented.”

Excerpt of September 2018 JLARC Report, “Operations and Performance of Virginia’s Department of Elections”

While state auditors wrote, “VERIS provides most, but not all, of the functionality, that general registrars need to administer elections in Virginia,” the report focuses much of its attention on issues still reported in 2020.

“When asked about VERIS’s operation during the last 12 months, the majority of general registrars disagreed or strongly disagreed the system was consistently operational or fast enough to allow them to work efficiently,” the report said. “Registrars reported that VERIS processes certain transactions slowly and is prone to crashing, particularly during times of peak usage before and on election day.

Signs of VERIS Fragility in 2020

“I would just say, I think what's happened is the state's outgrown the system,” began Ricky Keech, Loudoun County’s deputy registrar. “The state keeps adding patches, and I think they've done a great job trying to keep it functional.”

Keech is part of the state committee now reviewing options to replace VERIS, with a preliminary price tag and contours of what a new system needs expected to be released by the Department of Elections on October 1.

Since mid-September, the state has urged all Virginia localities to run data-heavy VERIS tasks in the middle of the night, in order to minimize chances of the system crashing during the day. The goal is to limit taxation on VERIS bandwidth, as voters are at the polls.

“The state is trying everything,” said Angela Maniglia Turner, Alexandria’s general registrar. “We get pretty regular emails saying, ‘hey, these are data, heavy reports, don't run these during the day, set them to automatically schedule at three o'clock in the morning,’ so that it doesn't hurt the system.”

Commissioner Piper touted the addition of server space as a means of adding lanes to ease data traffic jams within VERIS.

“We’ve added that space and are monitoring the system night and day, being alerted to any issues that may come up, trying to prevent those slow-downs from occurring,” Piper said. “I feel very confident in this system, as it is.”

Yet alarms were sounded in 2018 that additional server strength might not be enough.

Cabrera of Fairfax City agreed that VERIS performance has improved with added server capacity. But she still stressed her office has backup plans for voting, in case VERIS is not available when it’s needed most.

“The load is the issue, as far as I can see,” Cabrera offered. “And the more we are using it, the more it fails. The closer we get to the election, the more we're using it, and therefore, it tends to fail during those more critical time periods.”

Among 626 negative comments from the 2019 VERIS survey, perhaps the most dire warnings were reserved for how the system performs when results are recorded on election night.

“Too many screens to navigate. The uncertainty of where to place data requested.”

“The turnout reporting is INCREDIBLY confusing and prone to errors.”

“It is not intuitive, cumbersome, and makes absolutely no sense. I had to make my own step by step to make sure that I enter data properly. There should be an automated upload for election night results. They say they have one currently and it does work, but not for all categories or precincts. So, if you have something that only works for part of the items that you have to report then it does not work.”

“Makes me wonder what Election Day/Night may behold.”

The report noted individual names would not be attached to the comments. The Department of Elections also did not indicate which of Virginia’s 133 localities issued specific criticisms.

Both Keech of Loudoun and Cabrera agreed results reporting with VERIS remains an issue and may remain prone to failure.

“Election night reporting tends to run into its occasional problems, I would agree with that,” Keech said. “The last several elections there've been instances where it's gone down at periods and results haven't been able to be reported. So, it is rather prone to failing.”

“Even for someone who's done it for a long time, I always have to kind of go back to the instructions and weed through it, in order to understand what they're looking for.”

It’s a classic case of the devil you know, versus the devil you don’t. Northern Virginia registrars expressed varying degrees of confidence in VERIS, but most agreed to introduce a new system the same year of the century’s most consequential presidential election could have proved disastrous.

Among those who agreed the system must go, but not now, was former Virginia Elections Commissioner, Edgardo Cortés.

“If you look at the environment we're in, with a pandemic and with all of these changes going on around voting, I think if a new system were to be going online this year, that would have made things a lot more difficult and increased the potential for things to go wrong,” Cortés said.

“That’s what often happens when you're rolling out a new system and kind of working out the kinks to it.”

“Any new system while it's spiffy shiny and new, is still going to have issues, it's not going to operate exactly how you're envisioning,” said Turner of Alexandria. “And it's also a learning curve. While it might have everything we ever wanted, can we learn it that quickly? Can we know how to run these reports, do this data entry, do all this stuff and get all of our staff comfortable in that short of a time frame?”

Cabrera offered the matter is not an either / or proposition.

While the most critical concerns have far from faded into pale recession, Keech stressed Virginians should still trust the broader election system – and trust their vote will be counted.

“When I say, ‘trust the system,’ I mean, our ability to make sure you only vote once, and when you're ready to vote, you are able to vote,” Keech said. “We're getting it done, we're just working with a little bit older technology that maybe we want to.”

When asked about her level of confidence in the state’s VERIS fixes, Cabrera paused.

“Well, I'm confident that we will work it through,” she said. “And if the state system is not what everything that we need it to be every minute, I know how to get around VERIS and how to make it work, so that we can have an election.”