In the battle between a Trump Republican and a Democrat who hopes to become the first Black Latina in Congress, Beth Van Duyne is leading Candace Valenzuela. 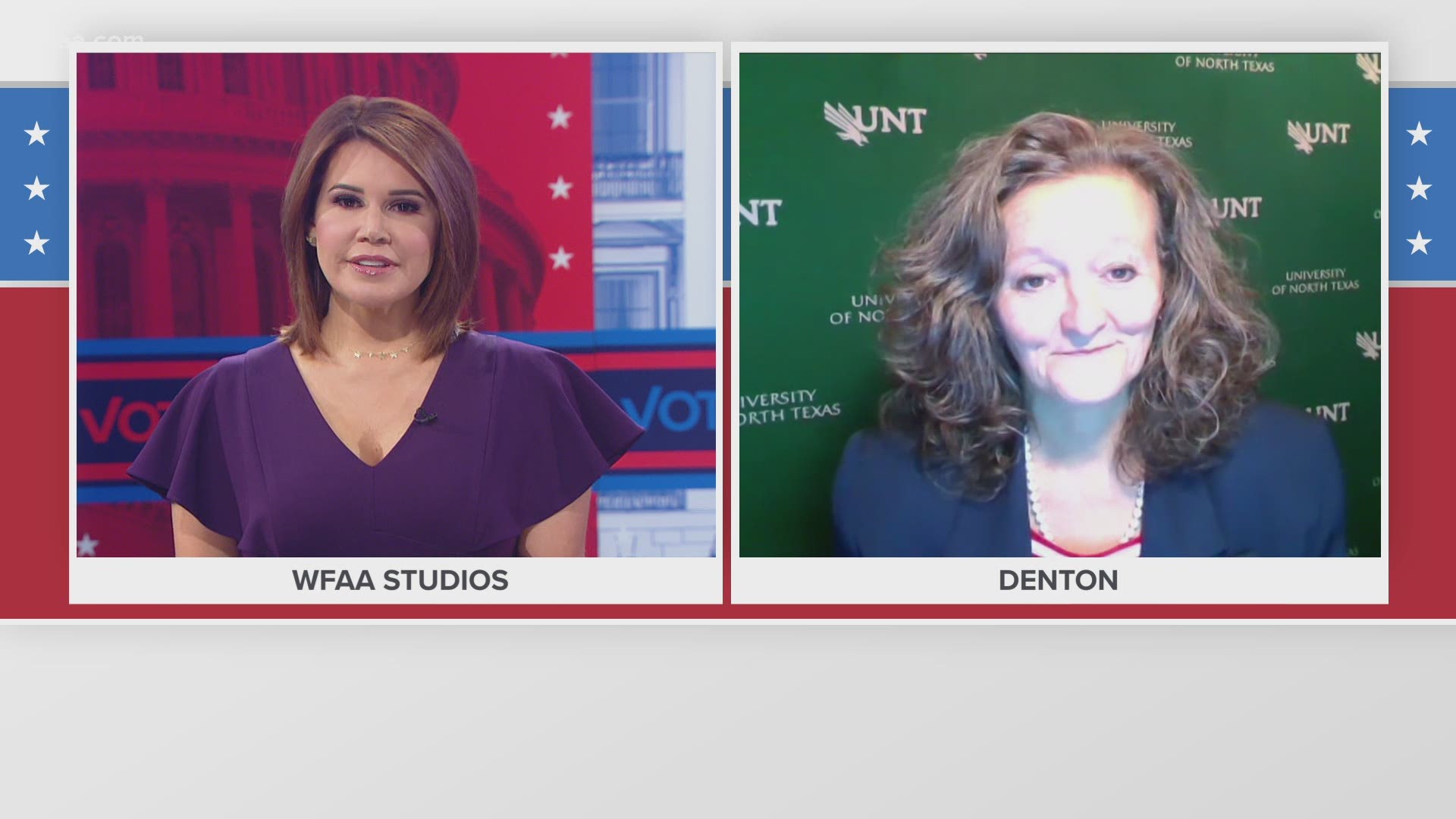 A number of other races across Texas remain undecided the day after the general election.

While President Donald Trump is projected to win Texas, vote totals in a number of key battlegrounds states are tight. As of midday Wednesday, former Vice President Joe Biden has 238 projected Electoral College votes to Trump's 213.

Trump won Texas by the thinnest margin of any Republican in decades, the Associated Press reports. It looks like Trump will have a single-digit victory over Democrat Joe Biden amid historic turnout in America’s biggest red state.

In the battle between a Trump Republican and a Democrat who hopes to become the first Black Latina in Congress, Republican Beth Van Duyne is leading Democrat Candace Valenzuela by less than 5,000 votes.

The seat is historically Republican and was left open by U.S. Rep. Kenny Marchant, who announced his retirement last year.

There are some answers for voters in North Texas races.

The Texas House had also been expected to be in play for the first time in nearly two decades. While a number of state House races have yet to be declared, early tallies show Republicans in some key House races maintaining a lead over their Democratic challengers.

Two widely-watched state House races still seem to be in play for Democrats to flip in North Texas, but Republicans were leading in both as of early Wednesday.

Democrats were nine seats short of the majority in the 150-member Texas House leading into Election Day. The party was also defending 12 seats it picked up in 2018. The party had been hopeful they could flip the House this cycle with a path through North Texas.

State Rep. Angie Chen Button was slightly ahead of her Democratic challenger, Brandy K. Chambers, as of early Wednesday by about 227 votes. Chen Button currently represents District 112, which includes part of Garland, Richardson, Rowlett and Sachse in Dallas County.

District 108's State Rep. Morgan Meyer, the Republican incumbent, rose slightly ahead of his Democratic challenger Joanna Cattanach late Tuesday, but the race has yet to be decided. Cattanach also ran against Meyer in 2018, losing by just 220 votes. District 108 includes all of Highland Park and University Park and parts of east Dallas.

Republican Matt Shaheen is the third-term incumbent in District 66, which includes parts of Dallas and Plano in Collin County. He faces Democratic challenger Sharon Hirsch, who also ran for the seat in 2018. Shaheen eked out a win with 50.3% of the votes, beating Hirsch by 391 votes. It appears he'll have a repeat in 2020 with about a 1,000-vote lead as of early Wednesday.

State Rep. Craig Goldman, for whom Abbott campaigned during early voting, appears to have won his race. The Republican has been in office since 2012 in Tarrant County.

In another North Texas race that saw high interest, it appears incumbent Republican Rep. Jeff Leach will win District 67 again, with about 52% of the vote against Democrat Lorenzo Sanchez. The district includes parts of Allen, Plano and Richardson in Collin County.

The battle for the state House attracted millions from national and statewide groups. The most recent campaign finance report showed candidates in 34 battleground districts raised a combined $39.4 million, according to The Texas Tribune.

Gov. Greg Abbott, who was not up for re-election, block walked with several incumbent Republican state representatives defending their seats.

Unusually tight races had been expected in the state after a record-breaking three weeks of early voting. Nearly 10 million people cast their ballots before Election Day, surpassing the total number of votes from the 2016 general election.

Texas Democrats pointed to changing demographics and huge early voting turnouts as strengths for the party.

But Texas Republicans said in the days leading up to the election that they were confident the state would stay red.

The Tarrant County Elections Administration says that about 11,000 of its 70,000 mail-in votes still need to be counted because they are "defective and may require replication," which could still factor in to some local races. The elections administrator told WFAA those ballots will probably be replicated and then counted "in the coming days."

In Dallas County, The Dallas Independent School District was asking voters to approve a $3.7 billion bond, which would include funding to improve 14 schools, new security technology and a new performing arts facility.

RELATED: Voters appear to support part – but not all – of $3.7B Dallas ISD bond election

The bond proposal includes $114 million for safety and security, including new campus security cameras with motion sensors to provide real-time alerts and additional cameras will replace obsolete systems at all campuses, the district said.

Preliminary election results show voters partially supported the bonds, but only about 84% of precincts are reporting.

Curious about the results of another race? Click here.