'I think he won my vote': In Atlanta, Andrew Yang shows off a movement that just might crack the mainstream

The longshot Democrat brought a few hundred people to the Georgia Beer Garden on Thursday. 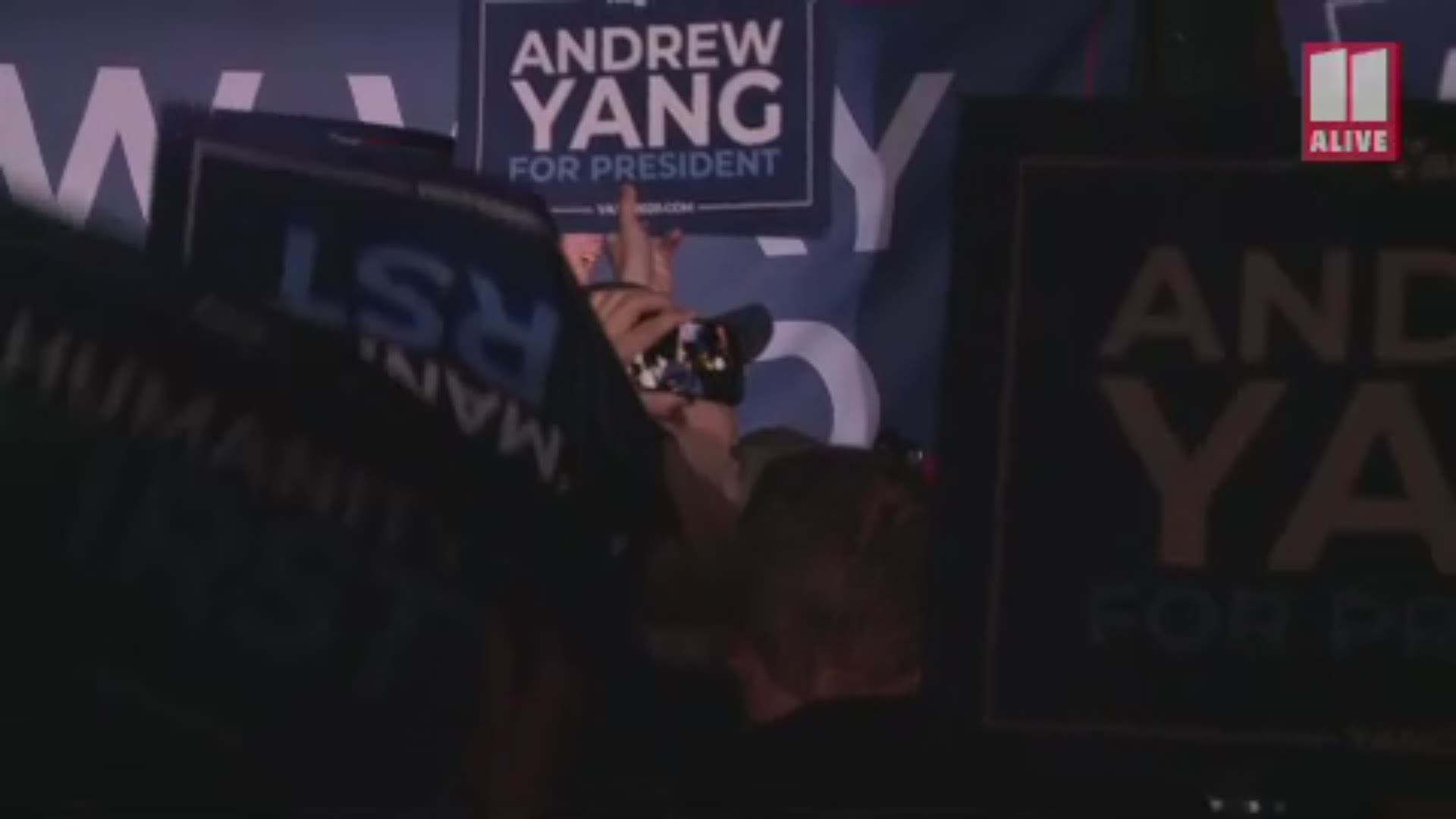 ATLANTA — There are different ways to get to the middle of the pack in a presidential field.

You can start out near the front - with a title like senator, attention from the cable news channels, big-pocketed donors and strong early polling numbers. And then you fade.

Or you can be the guy who started from so far behind his earliest campaign signs simply said, “Google Andrew Yang.” And then you gain ground.

Yang - the candidate who is somehow both drawing new followers by exuding optimism and promoting a campaign platform broadly designed around blunting the impact of the world as we know it soon ending - spoke to a crowd of roughly a few hundred packed into the outdoor patio of a beer garden in Atlanta on Thursday night.

He was composed delivering stump lines to supporters, and at ease freestyling jokes about contemplating crowdsurfing or how little time he was given to speak during Wednesday night’s debate.

His fans, known as the “Yang Gang,” were an eclectic mix of fellow travelers - if you could combine the good-vibes atmosphere of a Phish concert with the audience of an Apple product launch, that would roughly describe things - drawn to his highly distinct positions and engaging personal style. They ranged from a mental health professional who sees Yang as a “Bernie 2.0 with stronger policies” to a tech business owner who likens his energy and charisma to Barack Obama’s.

If an insurgent campaign is going to cross from the fringe to the mainstream, the point at which it does so probably looks a little something like Andrew Yang’s rally at the Georgia Beer Garden.

“I think he won my vote tonight,” said a woman brought, and evidently converted, by her mother.

Perhaps the most illustrative place to start with Andrew Yang - who typically gets the title of "businessman" by default, but who might better be described as something like "entrepreneurial futurist" - is with his views on the president.

Donald Trump, he said at the rally, is a "giant freaking cry for help."

And instead of demonizing the president's supporters, Yang says "we need to figure out what is driving this polarization, these fissures in American life."

"We need to figure out what the heck is going on with our people, and then how we can actually provide a better way, a better path," he said.

In this view, Trump is a symptom of social breakdown, not the cause.

The real cause, by Yang's accounting, is far more concerning - technological and environmental upheaval that right now is tearing at the threads holding society together and, without radical action, in the near future will snap them completely.

"We have this freight train bearing down on us, this freight train of this inhuman, punitive economy that's just grinding more and more of us up," he said at the rally. "And the more someone knows the more concerned they are ... they're like 'if other people knew what I knew, they would be more and more freaked out.' That's what the folks in AI, and environmental chemistry and robotics and all the other things tell me."

And if artificial intelligence wipes out millions of jobs and climate change displaces millions of people without a plan to deal with it in place ahead of time, Yang sees the social collapse that would occur as irreversible.

"What are the downsides of going too late? Everything. Disaster, catastrophe, disintegration, us turning on each other," he said. "And you can't stick the genie back in the bottle ... it's not like everyone goes home and puts their guns away."

"When society comes apart it's very hard to put it back together. Society's a bit like Humpty Dumpty that way."

'Someone who's solution oriented'

And yet, for this very grim outlook on things, part of Yang's draw is the wide smile with which he describes the end of the world and his earnest belief in the solutions he proposes for averting it.

His sprawling set of idiosyncratic policies can be dizzying to the uninitiated, but are the backbone of what's driving his rise from a curiosity in the presidential race to someone who, at least in the most recent Emerson national poll, is in fifth place with 4 percent support among Democrats (an NBC/Wall Street Journal poll in late October had him with 3 percent, behind Kamala Harris, while a FOX News poll put him even with Harris, both with 3 percent).

The signature policy among these is what he calls the "freedom dividend" - a $1,000-a-month basic income for every American to blunt the impact of an economy that will soon be able to rely on robots for a limitless supply of a wide range of manual labor.

"Technology is quickly displacing a large number of workers, and the pace will only increase as automation and other forms of artificial intelligence become more advanced," his campaign site says. "Good jobs are becoming more and more scarce and Americans are already working harder and harder for less and less."

And if it sounds crazy for the government to just give everybody a thousand bucks a month, Yang counters it's actually inevitable.

Universal basic income is just one of Yang's many platform planks you're unlikely to see from other campaigns.

He proposes to weaken the influence of money on elections by giving every American $100 "Democracy Dollars" every year to donate to candidates. He proposes re-emphasizing nuclear energy as an option to combat climate change. He proposes mandating paid family leave across the country.

And then there are more standard liberal policies he wants to enact - legalizing marijuana, providing a pathway to citizenship for undocumented immigrants and "Medicare for all."

All of which put him somewhere on the vanguard not of the left or the center or the right of the Democratic Party ... but somewhere.

His rallying cry is, "Not left, not right, forward."

"We're seeing that his message is resonating over and over again, not just with your traditional Democratic voter, but also with the disillusioned, the disaffected and the people who are just looking for something fresh and someone who's solution-oriented," Sanchez, the press secretary, said. "And I think with Andrew they see that and identify that candidate amongst this crowded Democratic field."

The question now facing Yang is: How do you translate a small but deeply fervent base of support into something large enough to make you truly competitive in a presidential race?

Trump is now the oft-cited figure for longshot, unconventional political figures who believe they can shock the world - but he was already leading Republican primary polls a year and a half before the 2016 election.

Andrew Yang only has a couple more months to break into the wider consciousness, and he has routinely had the least amount of speaking time in the debates, including Wednesday's (a fact not unnoticed by his supporters, who broke into a chant of "Let Yang Speak" at Thursday's rally.)

But he's starting to crack into the mainstream - his speech at the rally was delayed a bit because he had to appear on Wolf Blitzer's CNN program. And he announced during his speech he'll be on Jimmy Kimmel's show next Tuesday.

Whether there's enough time remains to be seen. Yang has gone from "Google Andrew Yang" to Jimmy Kimmel thanks to a remarkable commitment by his followers to convert - or "activate" as he phrased it - one new supporter, one YouTube view at a time.

To make up the current ground in polls, that process now needs to accelerate by many orders of magnitude.

The makings of it were on view in Atlanta, though. The "Yang Gang" wasn't a hashtag on Thursday night. It was a lot of people inspired to spend real money to come see a candidate who had teenagers shrieking with delight that they got a photo with him afterward.

"You don't look like the f****** internet to me!" he told the crowd at one point, to one of his largest cheers of the night.

"We gotta fight this out, Yang Gang," he said. "This passion here in this gathering can change the world if we are willing to work for it."

Woman's battle with HOA ended with her losing home, them purchasing it for $3.24