Only 10,000 expected at DC Women’s March, amid PR battle and clash with National Park Service

The expected attendance figures have not been previously reported and are recorded within a final permit issued by the U.S. Department of the Interior.

WASHINGTON, D.C., USA — What was once a uniquely American moment is likely to fade into memory this weekend, when the latest Women's March is expected to attract only 10,000 people to the nation's capital.

The staggering scale-back comes amid an ongoing public relations struggle, a dueling march, an unfavorable weather forecast and an apparent clash with the National Park Service.

The expected attendance figures have not been previously reported, and are recorded within a final permit issued Thursday by the U.S. Department of the Interior.

Ten thousand people are clearly recorded under “anticipated number of participants,” between the first bus arrival at 7 a.m. until the final departure at 5 p.m. Saturday.

A Women’s March spokesperson reached early Thursday said the organization would work to respond to all inquiries - yet representatives have not responded further as of Thursday evening.

The cascading confluence of events leading to the downsizing largely began with lingering allegations of anti-Semitism against Women’s March co-president Tamika Mallory.

Mallory faced near relentless criticism for a glowing Instagram post with Louis Farrakhan, and failed to denounce his invective against Jews during an interview on ABC’s The View.

A rival march emerged late Wednesday to welcome women who felt stigmatized by the original event’s relatively liberal social stances. The new rally will now known as the March for ALL Women Rally. 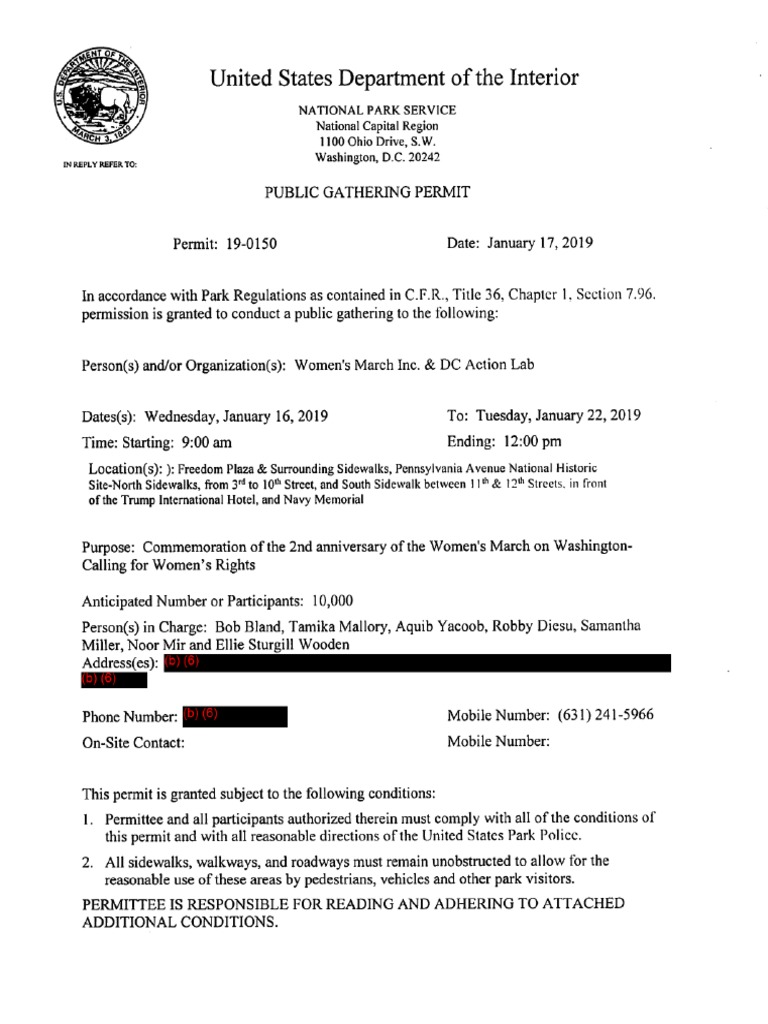 The latest march will be held in Pershing Park, directly across the street from where the original march will gather Saturday.

Confusion also surrounded where the 2019 Women’s March would gather.

Organizers originally hoped to meet on the steps of the Lincoln Memorial. Yet the location eventually migrated to nearby Constitution Gardens on the Mall, and ultimately, to Freedom Plaza.

In a message to supporters, the Women’s March blamed the National Park Service for the less prominent location.

“They wanted us to cancel the march altogether,” organizers wrote in a recent email. “We told them we were marching with or without their permission, and we secured a permit to march on Pennsylvania Avenue, past the Trump International Hotel.”

The Park Service then issued a pointed and particularly rare response.

“Any assertion that the National Park Service has encouraged any organizer to cancel their First Amendment demonstration is patently false,” a NPS spokesman told WUSA9.

“For generations, Americans have come to the National Mall to exercise their Constitutionally-guaranteed rights to assemble and be heard. The National Park Service has been clear that our process would protect those fundamental rights by processing applications for First Amendment events that had been submitted prior to lapse of appropriations.”

Contrasting with 2017's demonstration, the largest since the Vietnam era, Saturday’s march will be confined to Pennsylvania Avenue. Demonstrators will follow a route from Freedom Plaza to the Navy Memorial and back, marching in rain and temperatures hovering above freezing.