The institute is known as the "Birthplace of Medical Biodefense Research." Scientists and service-members there do research and work to protect the American soldier. 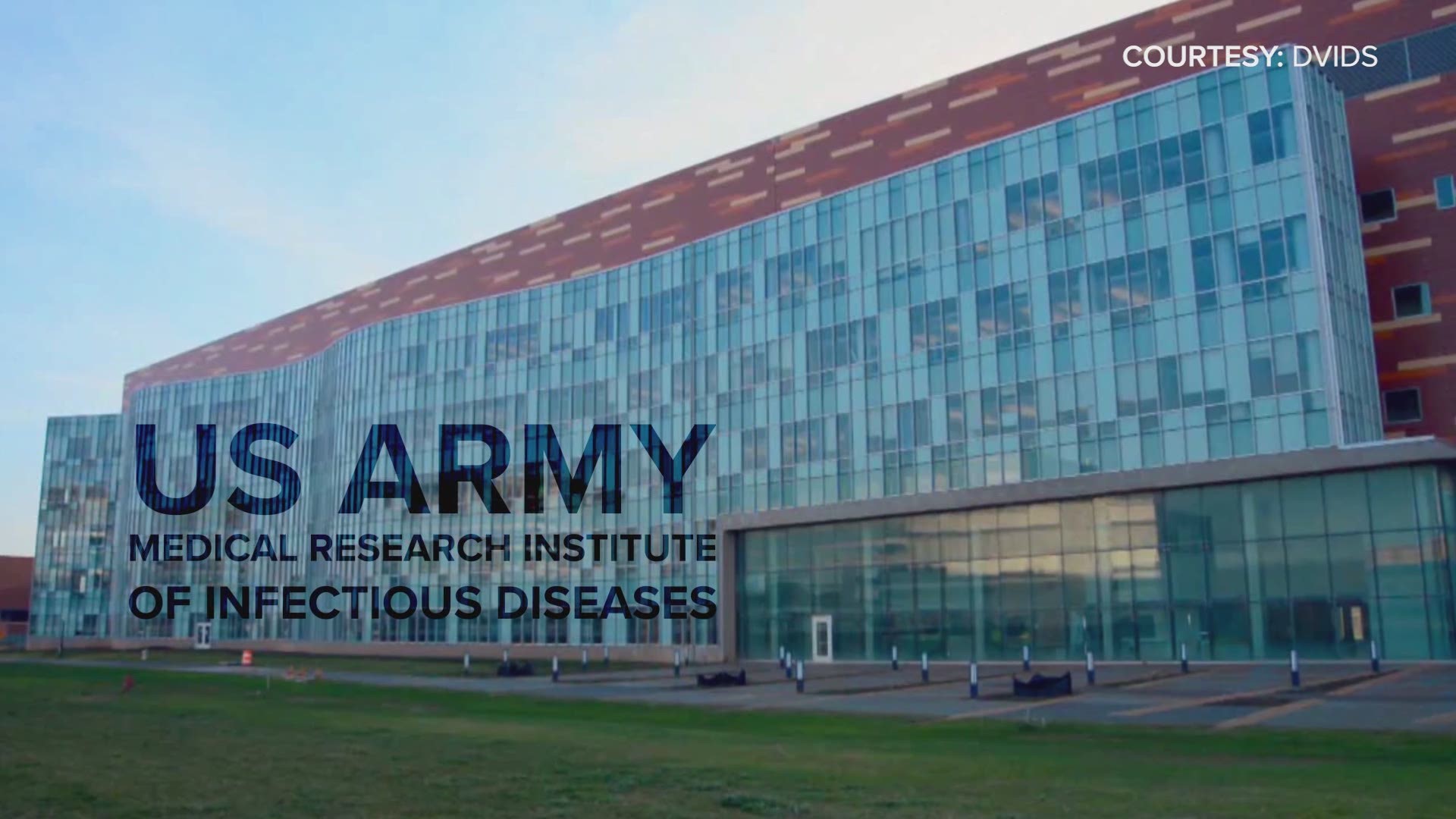 FREDERICK, Md. — Just outside of Frederick, Maryland, is Fort Detrick – the home of the U.S. military lab where researchers are working on COVID-19 treaments, and even possible vaccines.

Welcome to the U.S. Army Medical Research Institute of Infectious Diseases – usually shortened to USAMRIID. It's a place where lab coats and camouflage go hand-in-hand, where microscopes and test tubes replace guns and where HAZMAT suits protect government scientists from the danger of biological threats and infectious diseases.

It's known as the "Birthplace of Medical Biodefense Research." That means the scientists and service members there do research and help develop treatments and vaccines to protect the U.S. soldier around the world.

But if you think the work done there is just to help the military, Chief of Viral Immunology Dr. John Dye has an eye-opener about their mission.

"[It's] also, to help protect the globe, in that what we develop will eventually be mainstreamed into normal society,” he said.

USAMRIID said their new building is the largest and most complex bio-containment facility ever designed.

These guys know what they're doing. They've played crucial roles with research on the Ebola, SARS and MERS outbreaks. Right now, they're focused on COVID-19.

“Just the significant impact it's having not only on the United States but across the world, right,” USAMRIID Commander Col. Darrin Cox said. “And so, there's a sense of urgency.”

In particular, USAMRIID is trying to find a vaccine for the novel coronavirus that has, as of May 4, killed nearly 70,000 Americans.

“We are currently working with multiple entities in academia, industry and U.S. government where those vaccines can be provided to USAMRIID for us to assess in animal models,” Dye said. “The gold standard that most people use are monkeys or non-human primates.”

They’re collaborating on treatments, as well.

“Right now, our institute and many other institutes are currently testing, in culture or in flasks, different small molecules and drugs that are currently on the market and also in development,” Dye said.

Multiple options are also going into clinical trials to figure out how the drugs and vaccines will work in the human body – not just in the lab. Dye thinks that data will start coming in over the next couple months.

In this situation, Cox explains the collaboration is critical.

“Often in science you sort of do some discovery on your own, then you publish it, then you talk to others about it,” he expanded. “This is more sort of a parallel process amongst a lot of collaborators because of the sense of urgency that we have right now.”

We asked Dye what kind of pressure scientists feel when they see just how contagious COVID-19 is.

“We know that for every day we take longer, we're allowing this virus to take a greater hold on the world and on our country,” he said.

We also wanted to know how it feels to know the work they’re doing inside the lab could help their neighbors, family members, friends and people they might pass on the street.

“It's very emotional,” Dye said. ”This disease is in our own backyard. It reminds us why we keep coming into work every day, why we keep doing this, that we're doing it for the greater good and for a global effort.”

We also asked Dye when a treatment or vaccine would be available to the general public. He said the time frame they're talking about is six months to a year. While that might seem like a long time off, it’s important to have some perspective. Normally, this kind of work takes two-to-five years.

Last summer, the Centers for Disease Control and Prevention shut down the lab at Fort Detrick because structural defects led to some violations. Brig. Gen. Michael J. Talley, commander of U.S. Army Medical Research and Development Command and Fort Detrick, said there was never any danger to the community, but changes had to be made. The lab was restored in February.