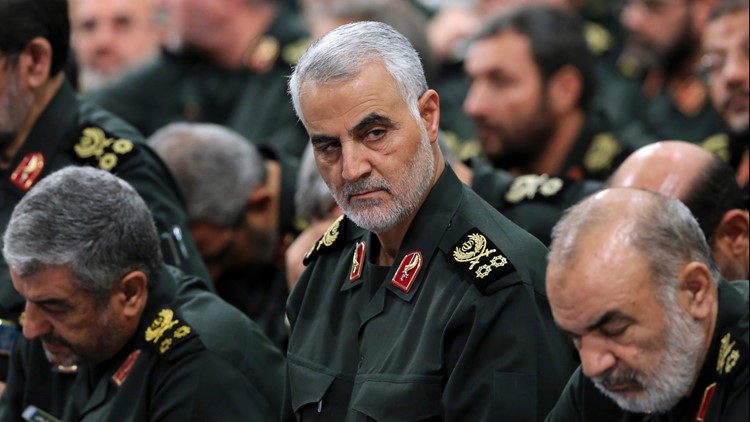 Photo by: AP
FILE - In this Sept. 18, 2016, file photo provided by an official website of the office of the Iranian supreme leader, Revolutionary Guard Gen. Qassem Soleimani, center, attends a meeting in Tehran, Iran. Iraqi TV and three Iraqi officials said Friday, Jan. 3, 2020, that Soleimani, the head of Iran’s elite Quds Force, has been killed in an airstrike at Baghdad’s international airport. (Office of the Iranian Supreme Leader via AP, File)

US sending 3,000 more troops to Mideast as reinforcements

WASHINGTON — The United States is sending nearly 3,000 more Army troops to the Mideast in the volatile aftermath of the killing of an Iranian general in a strike ordered by President Donald Trump.

Defense officials said the troops are from the 82nd Airborne Division at Fort Bragg, North Carolina.

They are in addition to about 700 soldiers from the 82nd Airborne who deployed to Kuwait earlier this week after the storming of the U.S. Embassy compound in Baghdad by Iran-backed militiamen and their supporters.

The reinforcements took shape as Trump gave his first comments on the strike. He said he ordered the killing of Iranian Gen. Qassem Soleimani because he was “plotting to kill” many Americans.

Global powers are warning that the U.S. killing of Iran’s top general has made the world a more dangerous place. But some also are suggesting that Iran shared some blame by provoking the strike.

Oil prices surged, reflecting investors' jitters about Mideast stability. Iran vowed revenge against Americans. Twitter users turned “WWIII” into a top trending term. But there was praise from Israel and a right-wing opposition leader in Italy.

It was an airstrike that killed Soleimani, who was the architect of Iran's regional security apparatus. The strike happened at Baghdad's international airport Friday, Iranian state television and three Iraqi officials said. "General Soleimani was actively developing plans to attack American diplomats and service members in Iraq and throughout the region," the Department of Defense said in a statement.

The Department of Defense said, "at the direction of the President, the U.S. military has taken decisive defensive action to protect U.S. personnel abroad by killing Qasem Soleimani, the head of the Iranian Revolutionary Guard Corps-Quds Force, a U.S.-designated Foreign Terrorist Organization."

RELATED: Australia fires: before vs. after images from space