This will be Maj. Gen. William Walker's fifth inauguration, but the first time in his tenure that the guard will be armed. WUSA9 spoke to him one-on-one. 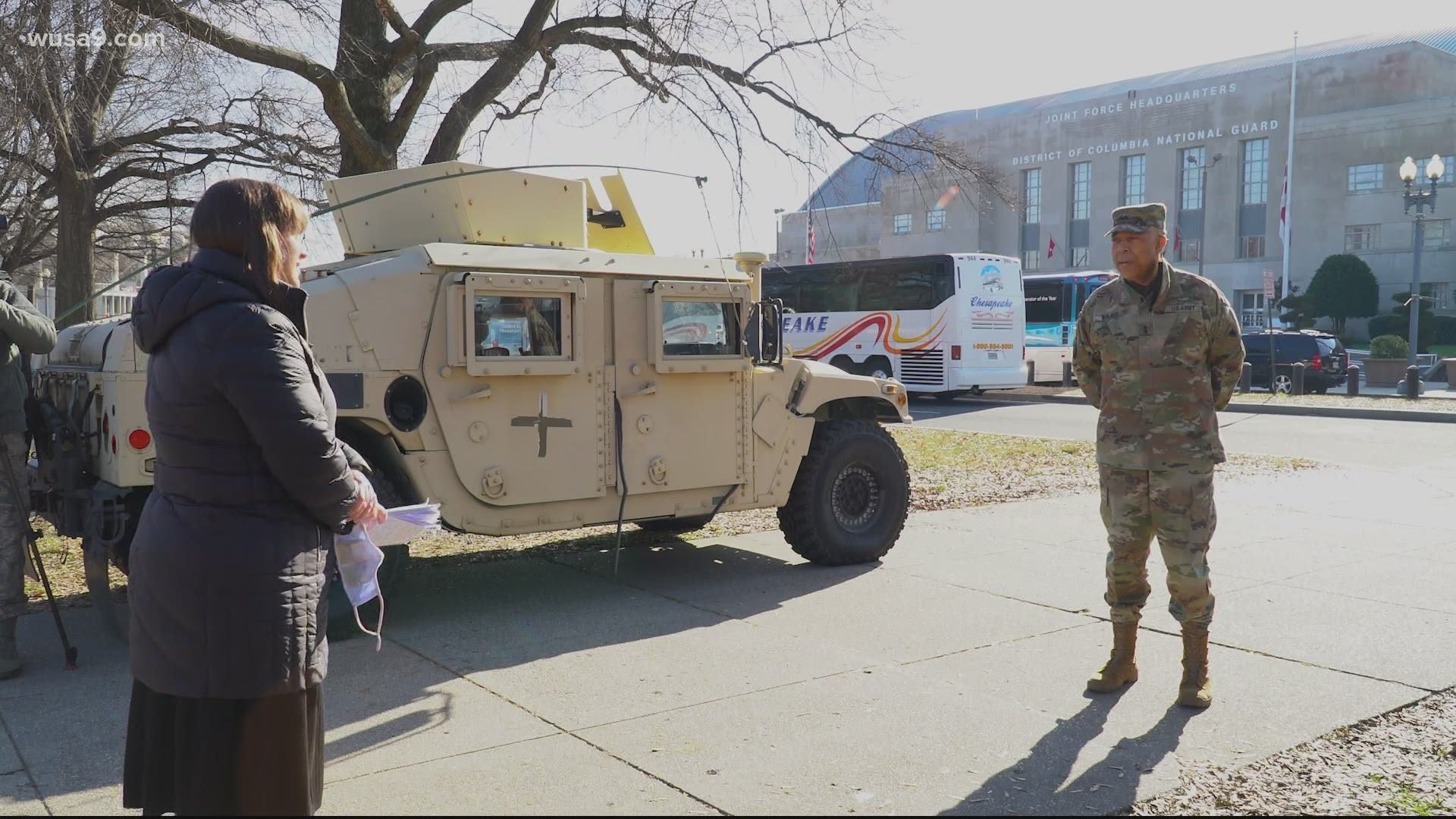 WASHINGTON — The leader of D.C.'s National Guard spoke Wednesday for the first time since the Capitol riots. There have been questions about how and when D.C. officials and Department of Defense leaders called up the Guard when crowds rioted and breached the Capitol on Jan. 6.

When WUSA9 asked Commanding General William J. Walker what went wrong on Jan. 6, he referred us to the Department of Defense. DOD has said Capitol Police initially declined multiple offers to help and only called in an emergency request after it was too late to quickly deploy.

But, Walker did address concerns about what's to come in the next week, and said for Inauguration Day, they're working together to call up thousands of troops early.

This will be Walker’s fifth inauguration, but the first time in his tenure that the guard will be armed.

At what point did you realize that this inauguration was going to be really different than inaugurations in the past?

Maj. Gen. Walker: The events on Jan. 6 told everyone that this is going to be a different inauguration. We’re going to need more guardsmen to make sure there is a peaceful transition of presidential power.

How do you prevent what happened at the Capitol from happening again given the threat of violence?

Maj. Gen. Walker: So, as you can see, we're about four times larger than we were on Jan. 6. Thousands of guardsmen are here and they're armed, so that should do it. 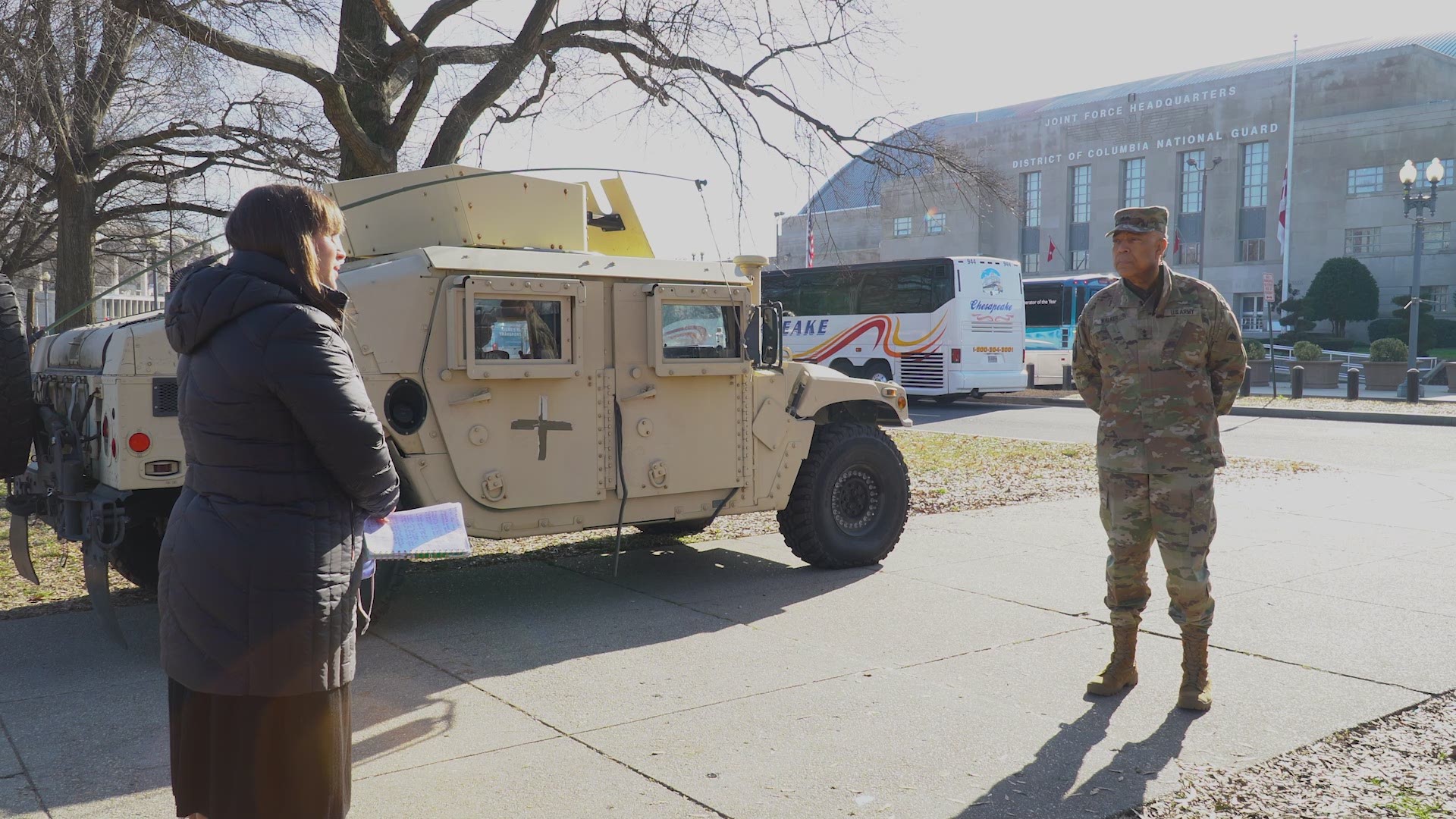 What are the orders your guardsmen have should they encounter angry crowds like what we saw on Jan. 6?

Maj. Gen. Walker: They are to support law enforcement.

Will your guardsmen have the ability to use force if needed?

Maj. Gen. Walker: Everyone has the inherent right of self-defense, so they’ll have the right to defend themselves, yes ma’am.

Will your guardsmen have the ability to make arrests if needed?

Are you fearful for any of your guardsmen with what we've seen in the past?

What makes you say that?

Maj. Gen. Walker: The years I've been in this uniform. I know what the National Guard can do.

What do you say to the citizens of D.C. who saw what happened on Jan. 6 and are fearful that could happen again on Inauguration Day?

Maj. Gen. Walker: They can be reassured that the U.S. National Guard is here to keep them safe.

Maj. Gen. Walker: I'd refer them to the Department of Defense.

There have been a lot of questions about what went wrong that day at the Capitol. WUSA9 asked Major General Walker exactly that and why there was a delay getting guardsmen to the Capitol and if he's recommending any policy changes to prevent this from happening again. Each time he referred us to the Secretary of Defense and the Secretary of the Army. He said he's not in the policy recommendation business and as an officer, follows the directions he's given.

Spent some time with the @DCGuard1802 at the DC Armory this morning—there are buses lined up as troops come in to help with the inauguration. A group from NJ got off the bus as we were waiting @wusa9 pic.twitter.com/tNfwxOvxth

RELATED: National Guard sending up to 15,000 troops to DC ahead of Inauguration Day