Vets who spent months breathing thick, black smoke from the pits where the military torched its waste hope this is the year Congress forces the system to make it easier to get help.
Author: Bruce Leshan
Published: 8:54 AM EDT April 29, 2019
Updated: 10:23 PM EDT May 1, 2019

WASHINGTON -- Etched into the marble of the Lincoln Memorial is the President’s pledge to care for those who have "borne the battle."

But thousands of veterans of Iraq and Afghanistan have been fighting a losing battle with the Department of Veterans Affairs to get help for their debilitating injuries.

They are convinced they’ve been left with lung damage, cancer and other illnesses from months of breathing thick, black, noxious smoke from garbage pits where the military would torch everything from plastic bottles to body parts.

Megan Kingston said she and her fellow troops at Camp Liberty in Baghdad were enveloped in soot so thick they sometimes couldn’t see their hands in front of their faces.

“We were living in that every day. Breathing it in every day," she recalled. "Every morning, we’d be rained black smoke on us."

Now, the 31 year old former Army medic has to take 14 different medications every day to treat her obliterative bronchiolitis, which is a progressive and degenerative lung disease that’s choking off her ability to breathe.

She’s gone from running triathlons to gasping for air on a walk around the block outside her home in Haymarket.

“When I walk and talk, you notice how I slow down, and I skip a beat,” she said, glancing at her fingers, turned purple from her lungs struggling for oxygen.

Her doctors say her disease is terminal.

“You just have this moment like, crap, I’m dying," she said. "This is a progressive disease, and it’s going to kill me eventually, and it’s like, man, that sucks."

Megan sits with her oxygen.
WUSA

She blames her illness on long-term exposure to the smoke from the burn pit. After a three-year fight, the Department of Veterans Affairs finally agreed. She now has a 100 percent service related disability rating. But she is furious that she and thousands of other vets have had to fight so hard for their exposure to be recognized.

Almost every base and forward operating position in Iraq and Afghanistan had a burn pit. Troops and military contractors burned everything in the pits, from broken military vehicles to human waste. “I watched that thing change colors. It was purple, it was green, it was orange,” said Kingston.

She is far from alone. In the last decade, the VA has processed 11,581 disability claims connected to burn pits in Iraq and Afghanistan. It has denied all but about 2,318 of them.

Veterans groups like the Iraq and Afghanistan Veterans of American and Burn Pits 360 have pressured Congress and the VA to do more.

“All we want is for our country to care about us, and to take care of our brothers and sisters in arms when we get home,” Melissa Bryant of IAVA said.

“Service members are not saying that this is wrong that we were exposed to this. What they’re saying is, ‘If you’re going to send us to war, then treat us for whatever is wrong with us when we get back,” Tom Porter, IAVA legislative director, said.

The VA is working with the National Academies of Sciences on a new study of the long-term health effects. of burn pits. The last report nearly a decade ago concluded there was not enough data.

But in his lab on Long Island, Hofstra medical school professor Anthony Szema, MD said the science is now clear.

Damage to the lungs from burn pits.
WUSA

“These black particles are carbonaceous particles, are burn particles, in the lung tissue itself,” he said, pointing to black spots on an image of a lung biopsy.

Another biopsy from a soldier deployed to Iraq told a similarly alarming story.

“In the center, look at the white spot. This is a crystal," Szema said. "You should not see crystals in the lung."

Szema has found the residue of burn pits in the lungs of troops deployed to Iraq and Afghanistan.

“We are very clear that burn pits are leading to long-term, severe consequences," he said. "You don’t need a doctor to tell you, you’re not supposed to burn your trash and inhale it."

Vets are pushing Congress to pass the Burn Pit Accountability Act of 2019, which would force the Defense Department to track troops who are exposed to burn pits and airborne toxins and include them in a registry, unless they opt out. There is already a registry, but veterans must sign up themselves.

Congress is also reviewing the process the VA uses to add to the list of diseases that are presumed to be service-connected. Rep. Raul Ruiz (D-CA) wants to classify combat burn-pit exposure as the presumed cause of a whole range of lung disorders, making it easier for sick vets to get medical care and disability benefits.

If you want to contact your representative, you can call the Capitol Switchboard at 202-224-3121.

Megan Kingston stands in her home. She served in Iraq, and says the air from the burn pits there left her with permanent damage to her lungs.
WUSA

Megan Kingston is hoping this is the year the tide turns for vets like her.

“I will continue to fight until I can’t fight anymore," she said. "And I will keep fighting for those who can’t fight for themselves."

She’s just not sure how much time she has left. 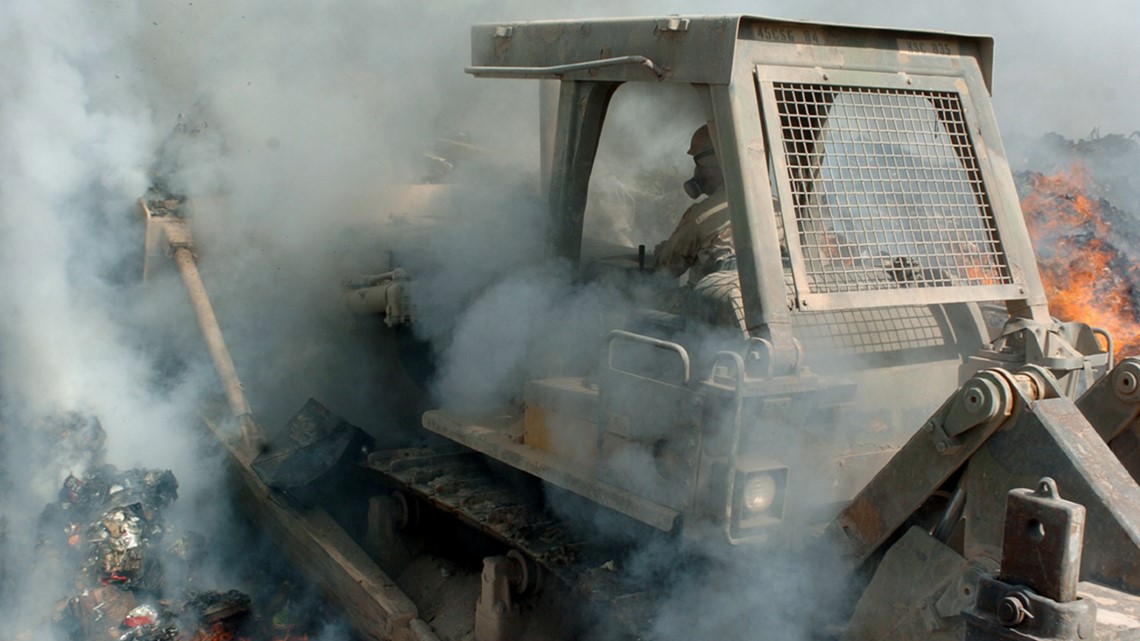