As thousands of guardsmen check-in, visitors are canceling reservations as they heed the warnings from city officials to stay away from the District. 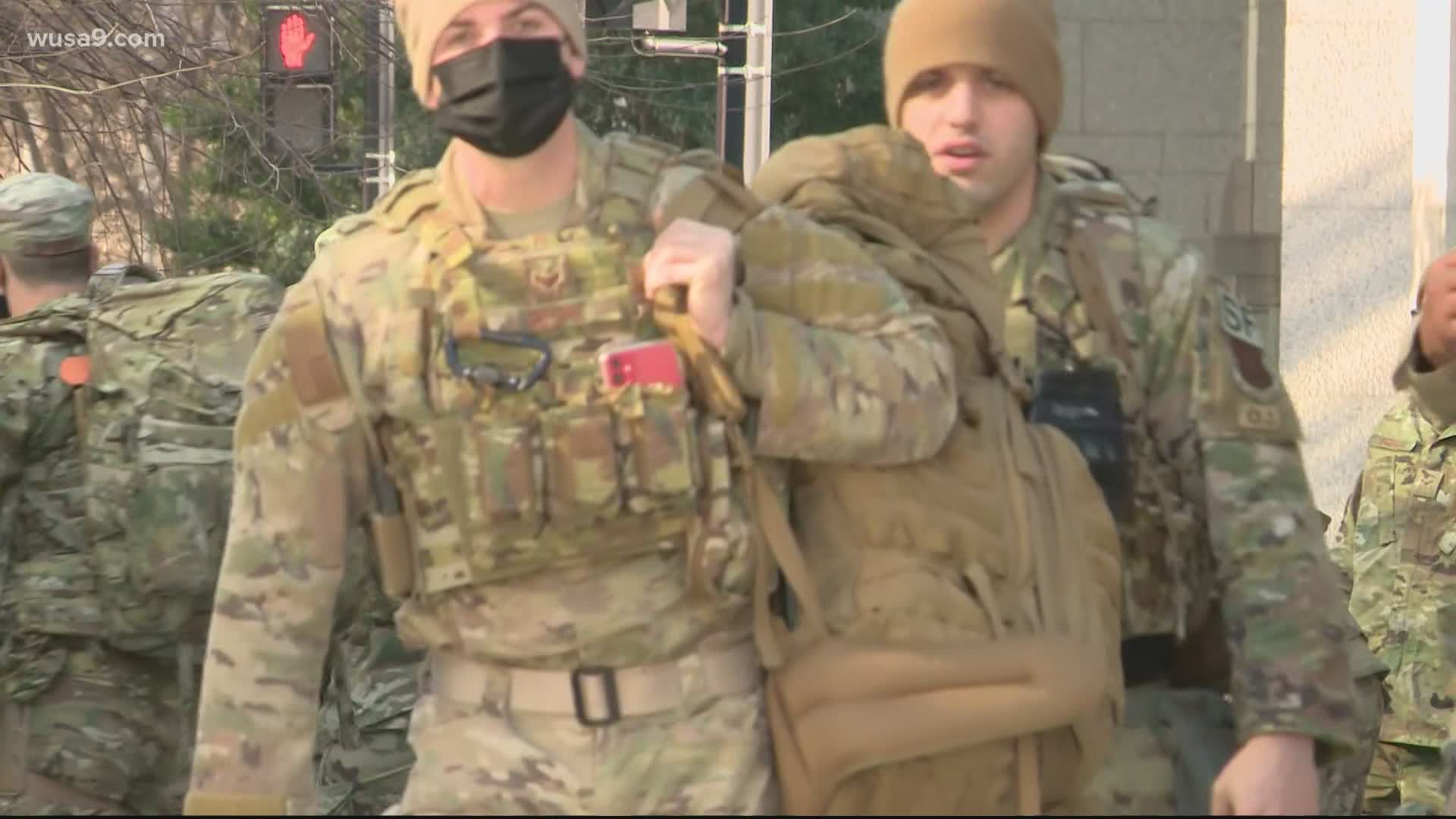 WASHINGTON — Approximately 20,000 National Guard troops from across the country will be in the District by this weekend to help protect the city from threats of a possible second attack leading up to Inauguration Day.

At several hotels near the U.S. Capitol and the National Mall, buses of guardsmen were seen being dropped off. At least 120 guard members were spotted checking in at the Hyatt Place Washington DC / National Mall.

The reservations counter the roughly 40 cancellations made by guests at the hotel because either the inauguration was virtual this year or per the request from Mayor Muriel Bowser for travelers to stay out of the District for safety and security purposes.

"Our hotel, if not the safest, is one of the safest," front desk concierge Dean Smalls said. "Considering what's going on, I found them [guardsmen] pretty relaxed."

About 20,000 National Guard troops are being deployed to D.C. for Inauguration week. For at least one hotel near the National Mall, guardsmen from different states are making up most of its guests. The latest group that just checked in tells me they’re from NY. @wusa9 pic.twitter.com/WUYg3SeUKd

The influx of military personnel is a stark difference from the week before when it was President Trump's supporters that made up the majority of guests at the National Mall location. The general manager told WUSA9 that several of the guests trashed some rooms, refused to wear masks and vandalized and damaged property.

The manager alleges they went as far as writing all over paper menus and linens "Trump won."

Owner Geoffrey Griffis said he's disheartened by the impact the rioters and domestic terrorists have placed on D.C. He is worried about the potential effects it could have on the culture of the city and the hospitality industry as a whole in the long run, given the hit they've already taken from the pandemic.

While Griffis finds the warnings to stay clear of the District important, he questions if it will affect more of the people traveling to the city without any political reasoning.

"This has raised to a new level," he said. "The security essentially is a shut down that even good folks and law-abiding people can't come and enjoy what the city has to offer. It will take a lot of work to bring us back to where we were and where we should be."

Meanwhile, groups such as Black Lives Matter DC and ShutDown DC have called on every hotel in D.C. to close completely between Jan. 15 and 21. UNITE HERE Local 25, the hotel workers' union representing 7,200 DMV hotel workers, also called for hotel closures in the city to protect staff and the public. The union asked for hotels to shut down unless they are hosting security personnel or the National Guard. Local 25 also called for any hotel hosting security personnel to permit their staff to opt-out of reporting to work, and allow them to leave at any time if they feel unsafe.

"Last week, we watched in horror as insurrectionists terrorized the District, putting our members, as well as the broader public, at risk of violence and exposure to COVID-19," Executive Secretary-Treasurer John Boardman said in a statement. "Our Union took decisive action to protect our members, and called on our hotels to evacuate. But the threat has not dissipated, as we continue to hear reports of armed, far-right militias planning to threaten Washington in the days ahead!"

Owners like Griffis, while exempt from the union's request, said businesses do not have the luxury to close down amid a pandemic.

"I am not personally understanding how that will help employees," he said. "If we don't have places to come to work, we can't put food on our tables."

Destination DC reported hotels have already been seeing cancellations because Inauguration Day will be virtual. Add the pandemic in the mix, and hotels barely scratched the surface on the number of guests they had even a year ago.

Recent data from Destination DC showed occupancy was 15% for the week of Dec. 27 - Jan. 2, but in 2017, occupancy was 95%. To note, hotels had room night minimums, so the number reflects nights also booked by people in town for both the inauguration and the Women's March.

“Mayor Muriel Bowser and President-Elect Biden’s PIC have made it clear that it’s for everyone’s benefit to stay home and celebrate inauguration virtually in light of the unprecedented attack on American democracy and the ongoing pandemic. Mayor Bowser has announced many additional precautions, and hotels are a part of the local community that may be adding security measures in light of last week’s attack and the ongoing threat to our country as outlined by the FBI.

Inauguration is typically a shot in the arm for the DC economy, when visitors come and stay in hotels, eat in restaurants and experience the city in addition to celebrating the incoming president. Given the current pandemic and security threats, as well as indoor dining, museums and attractions closed, we don’t expect inauguration to have the economic impact it normally would generate.”

RELATED: In one week, DC turned into a secure military zone