Judge says Capitol riot defendant was 'belligerent,' but not violent 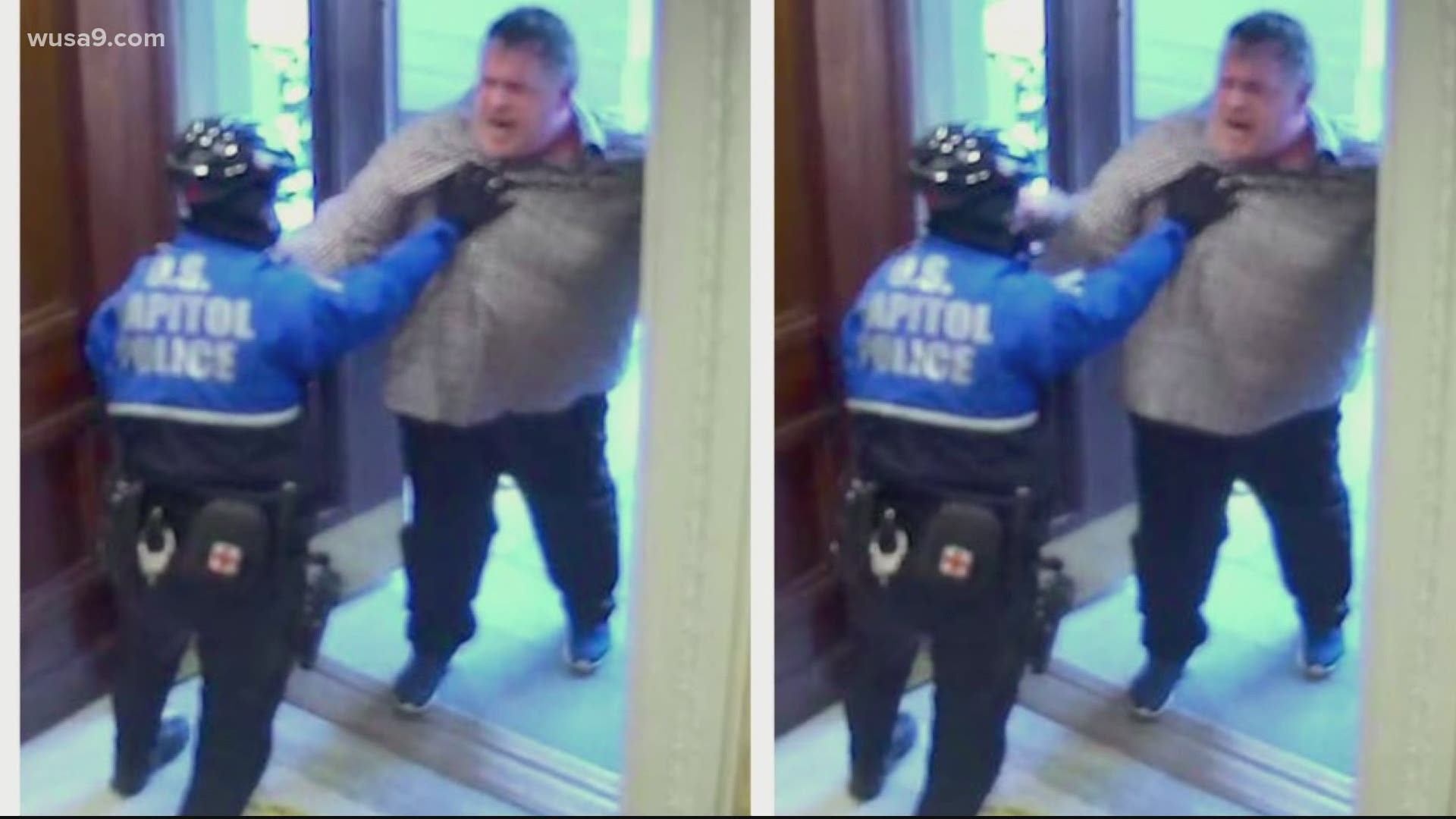 WASHINGTON — A Maryland man accused of assaulting police officers trying to remove him from the Capitol during the January 6 insurrection has won his release from jail on bond.

Daniel Egvedt, who sold his Northern Virginia home last year and moved to Garrett County, Maryland, in the western part of the state is facing seven counts – four of those felonies – for allegedly fighting with police officers and physically resisting attempts to keep him from moving further down the Hall of Columns.

In court paperwork, Egtvedt's attorney argued Capitol Police officers actually assaulted him, knocking him into a pillar causing a concussion.

After viewing surveillance video, U.S. District Court Judge Christopher Cooper said it appeared to him Egtvedt was being belligerent but not trying to injure officers.

Cooper also cited an opinion written by a Circuit Court judge in United States v. Munchel, a precedent-setting ruling in Capitol riot cases which found simply participating in the events of January 6 is not sufficient to justify pre-trial detention. And, that a defendant must pose a "concrete threat" to warrant being denied bond.

He will now be allowed to return to his home in Oakland, Maryland, and only be able to leave under strict conditions.

But prosecutors say the Daniel Egtvedt that entered the US Capitol on January 6 was a much different person than the man smiling in those photos.

They accuse Egtvedt of being “incoherent” and “screaming at the top of his lungs” while repeatedly fighting with police officers and physically resisting attempts to keep him from moving further down the Hall of Columns.

Charging documents say at one point, as five officers attempted to hold him back, Egtvedt tried to charge at a police officer even as another DC Police officer tried to grab Egtvedt by his waist to stop him.

Prosecutors say the incidents was captured on several surveillance cameras inside the Capitol.

Egtvedt hasd been detained since his arrest on February 13 after a magistrate judge denied him bond.

West said Egtvedt wouldn’t be a danger to the community if released, arguing he wasn’t even the aggressor on January 6. West says, “Mr. Egtvedt (was) violently assaulted by police officers, not once, but twice,” as they tried to remove him from the Capitol.

The documents allege Egtvedt was “pushed down by at least nine different police officers” and that “his head ricocheted off a marble column and he fell to the ground” where “he remained unconscious and motionless for several seconds, if not minutes.”

West writes that when Egtvedt came to he was bleeding and asked for medical attention, but allegedly was not offered any help.

At that point, the attorney writes, “Mr. Egtvedt was picked up and tossed through the doors by two police officers as if he were a rowdy patron being kicked out of a nightclub." West said Egtvedt was left "bleeding and pleading for help. He got none.”

Prosecutors argued Egtvedt has mental health issues and would be unpredictable if released, noting the day before he was arrested Maryland State Police had to be called to the family’s home in Oakland because he was threatening to physically stop his brother from taking their elderly mother to get a COVID-19 vaccination.