Barbed wire fence at the Capitol is coming down. But its razor wire will move closer to Congress.

Crews removed barbed wire from some of the tallest fencing around the Capitol Monday. A fence will come down, but its razor wire will move to another barrier. 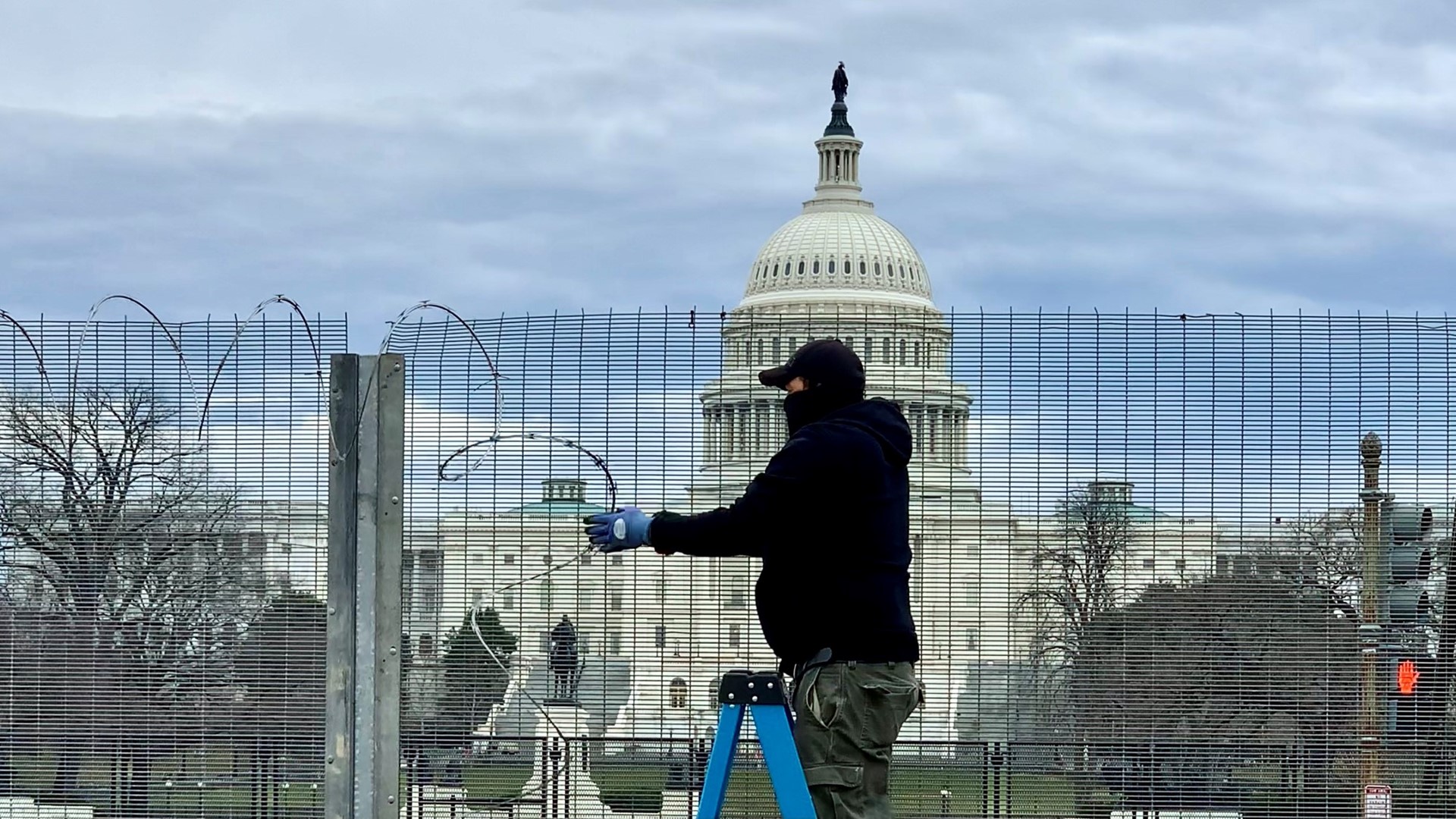 WASHINGTON — Only hours after crews removed daunting black fencing encircling St. John’s Church near the White House, six men on ladders began taking down barbed wire from a 12-foot fence, their work unfolding before a backdrop of the United States Capitol.

U.S. Capitol Police and D.C. Rep. Eleanor Holmes Norton (D) confirmed Monday the specific fence near the Capitol is coming down, an imposing barrier that runs parallel to 3rd Street on the National Mall. But what became clear as the afternoon progressed is that the barbed wire, removed from the 3rd Street barrier, will not be jettisoned. It will move closer to Congress.

RELATED: 'It is a new day' | Fencing removed from around historic St. John's Church after 8 months

The barbed wire will be re-installed on a newly-erected, smaller fence, USCP officials and Norton said. The new 8-foot fence is on the other side of 3rd Street, closer to the Capitol.

The security readjustment came after Capitol Police began plans to reopen 3rd Street to vehicle traffic. Because the roadway will be accessible to public vehicles, razor wire needed to move between cars and the Capitol grounds.

“I have to tell you, I think this is progress,” Norton said, addressing the deconstruction of the imposing 3rd Street barrier. “This is gradually getting us back to normal, when the Capitol belonged to the people of the United States, and the people of the District of Columbia.”

Clarity on Capitol fencing developments >> @EleanorNorton & I are now being told barbed wire is being taken down, & *moved to another fence* closer to the Capitol.

Cars will soon be able to drive through currently sealed off 3rd Street...

Norton acknowledged barbed wire will remain, in anticipation of March 4. The date is cited by conspiracy theorists as a day when former President Donald J. Trump could be inaugurated, an event that will not happen.

“The razor wire is being left up, just in case,” Norton said. “But if I may say so, these people are not coming back. They came because of Trump. They see the handwriting on the wall.”

In a further scaling back of unprecedented security, National Guard troops inside the perimeter are expected to leave March 12, according to Defense Secretary Lloyd J. Austin III.

In his first news conference leading the Pentagon, Mr. Austin declined to speak about intelligence concerning March 4, but said there was no additional request for a military presence at the Capitol.

“Right now, in terms of our expected stay, it is March 12,” Austin said. “And we don’t have additional requirements or requests from another federal agency to provide them support.”

VIDEO: @DeptofDefense Sec. Austin affirms **March 12** will be last day for National Guard troops at the US Capitol...