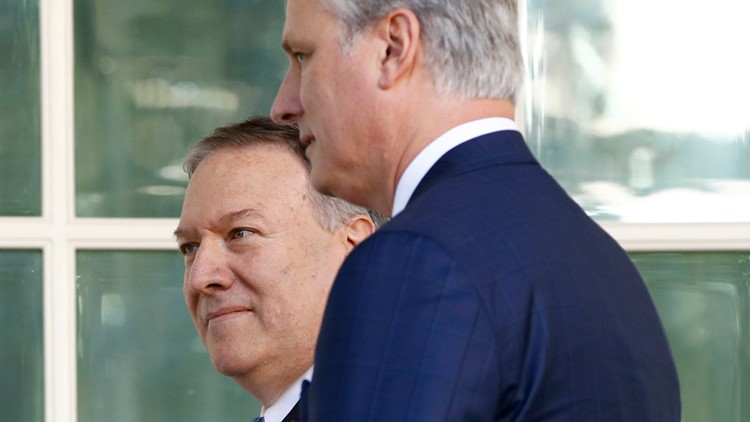 WASHINGTON — White House National Security Adviser Robert O'Brien says the Trump administration is working on putting together an official visit between Russian Foreign Minister Sergei Lavrov and President Donald Trump. It would be a meeting that would take place during the increasingly bitter impeachment hearings on Capitol Hill.

The administration official made the comments on CBS, to Face the Nation host Margaret Brennan. O'Brien told Brennan, "You'll have to wait and see, but I think there's a possibility that'll happen. We're working on it." O'Brien says the purpose of the potential state visit would be, "reciprocity."

As CBS News points out, this would be Lavrov's first visit to the United States since 2017, when he met with Trump at the White House. That meeting came just one day after Trump fired FBI Director James Comey. Members of the press, including U.S. photojournalists, were blocked from being present for, and documenting that White House meeting.

RELATED: Inside Texas Politics: With a near-record murder rate, why isn't there a plan to fight crime in Dallas?

Regarding reciprocity and what that means for the meeting, O'Brien elaborated by saying, "when Pompeo has gone to Russia, Putin's seen him. And one of the things that we've said with the- with the Chinese and the Russians is- and others, is we want reciprocity. And so Putin's met with ... Pompeo. I think as a matter of reciprocity, that's something we're looking at. But we're also looking at some other things. And we'll see if we can get there."

O'Brien told "Face the Nation" that there would be plans to have general conversations regarding arms control, but the timing of the meeting could raise suspicions because it would happen during the ongoing impeachment proceedings.