President Trump bans travel from Europe to US for 30 days

The ban excludes travel from the UK. 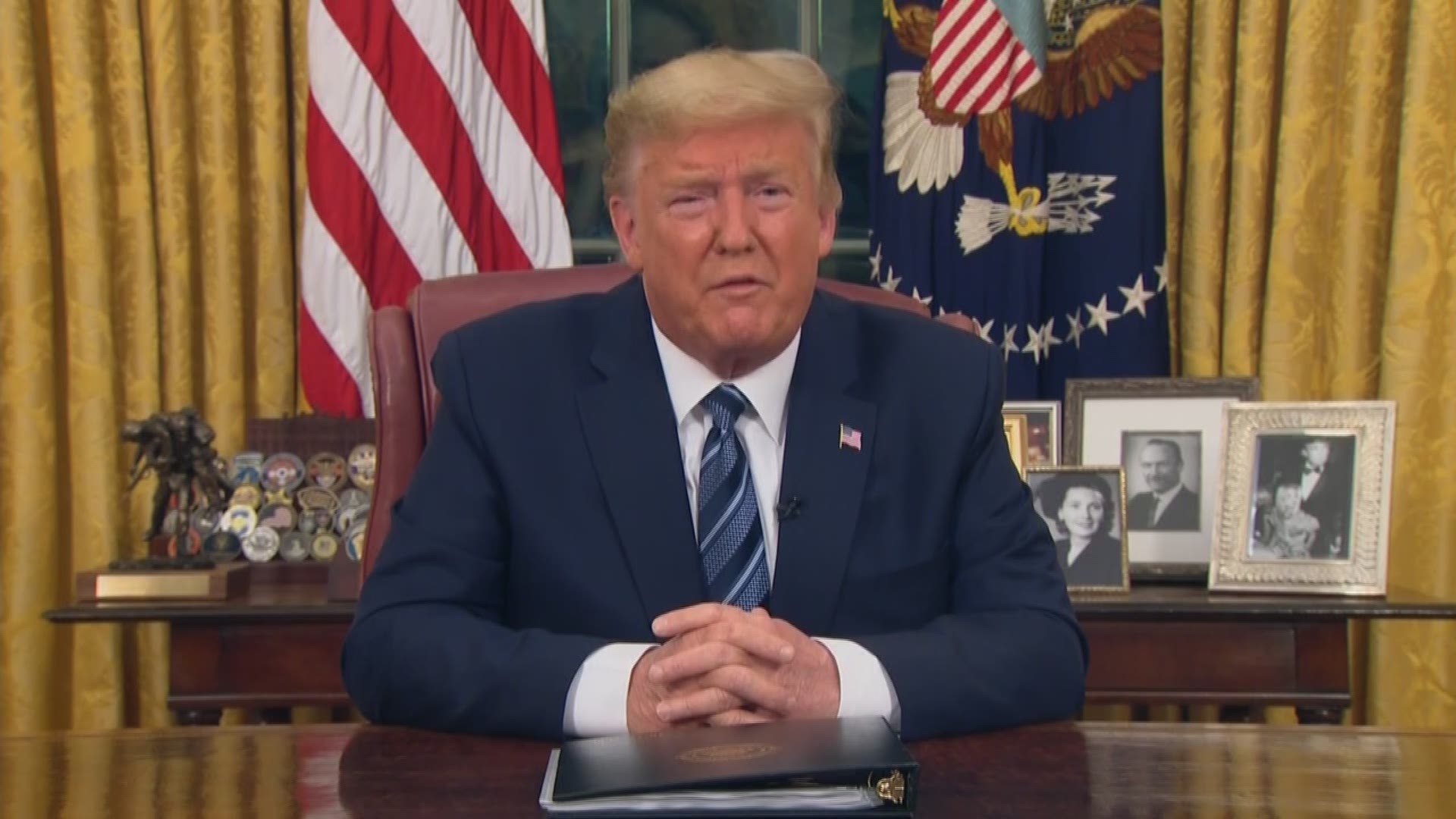 WASHINGTON — President Donald Trump says all travel from Europe to the United States will be suspended for 30 days amid the coronavirus pandemic, with some notable exceptions for legal permanent residents and U.S. family members.

Trump said he is suspending all travel from Europe to the U.S. for 30 days beginning Friday. Trump made the announcement Wednesday in an Oval Office address to the nation, blaming the European Union for not acting quickly enough to address the novel coronavirus and saying U.S. clusters were “seeded” by European travelers.

Trump said the restrictions won’t apply to the United Kingdom, and there would be exemptions for “Americans who have undergone appropriate screenings.” He said the U.S. would monitor the situation to determine if travel could be reopened earlier.

Trump said “we are marshaling the full power” of the government and private sector to protect the American people.

The Department of Homeland Security released a statement after the president's remarks to clarify. The Acting Secretary Chad F. Wolf said the ban does not apply to legal permanent residents, (generally) immediate family members of U.S. citizens, and other individuals who are identified in the proclamation.

"The actions President Trump is taking to deny entry to foreign nationals who have been in affected areas will keep Americans safe and save American lives. I applaud the president for making this tough but necessary decision. While these new travel restrictions will be disruptive to some travelers, this decisive action is needed to protect the American public from further exposure to the potentially deadly coronavirus," Wolf said.

Homeland Security also had to clarify that the restrictions would apply only to most foreign nationals who have been in the “Schengen Area” at any point for 14 days prior to their scheduled arrival to the U.S. The area includes France, Italy, German, Greece, Austria, Belgium and others.

The State Department also cautioned U.S. citizens to “reconsider travel abroad” due to the virus and associated quarantines and restrictions.

The number of confirmed cases of the new coronavirus has topped 1,000 in the U.S.

During his address, President Trump made the following additional actions:

The Small Business Administration has been instructed to exercise available authority to provide capital and liquidity to firms affected by the coronavirus.

He said the SBA will begin providing economic loans in affected states and territories. The low-interest loans are expected to will help small businesses overcome temporary economic disruptions caused by the virus. The president also asked Congress to increase funding for the program by an additional $50 billion.

He also will be instructing the Treasury Department to defer tax payments, without interest or penalties, for certain individuals and businesses negatively impacted. He said this will provide more than $200 billion of additional liquidity to the economy.

"Our future remains brighter than anyone can imagine," Trump said to end his address. "Acting with compassion and love, we will heal the sick, care for those in need, help our fellow citizens, and emerge from this challenge stronger and more unified than ever before. God bless you, and God bless America.  Thank you."

After his speech, American and Delta Airlines started to make changes after the travel ban announcement.

"The safety and health of our customers and employees is always our highest priority. Delta has and will continue to quickly make adjustments to service, as needed, in response to government travel directives. More information on Delta’s response to the COVID-19 virus is available here."

American Airlines says it currently serves seven airports in five countries within the Schengen Area, including France, Germany, Netherlands, Spain and Switzerland. President Trump's travel directive will impact 14 out of 15 daily flights, including:

Congress is working quickly to unveil a coronavirus aid package, while the Trump administration is considering delaying the April 15 federal tax deadline for most individual taxpayers as well as small businesses.

Trump's announcement of his Oval Office address was made after he tweeted, "I am fully prepared to use the full power of the Federal Government to deal with our current challenge of the CoronaVirus!"

The World Health Organization has declared that the global crisis is now a pandemic. A pandemic classification describes how a disease spreads rather than its severity. Essentially this means that the disease has been popping up in many countries, not that it's getting worse.

However, Dr. Anthony Fauci, director of the National Institute of Allergy and Infectious Diseases, has warned that the outbreak in the U.S. is going to get worse.

The outbreak has been expanding as New York, California, Washington state and even the nation's capital, Washington, D.C., all declared a state of emergency.

The coronavirus, which started in Wuhan, China, last year, has spread to dozens of countries. There are 122,000 confirmed cases worldwide and over 4,500 people have died from the virus, according to data from Johns Hopkins University.

The outbreak has impacted the U.S. stock market, after it plunged 5.9 percent Wednesday on Wall Street, wiping out all of Tuesday's big gains. It also caused governments to take serious steps to contain the virus.

Italy says all stores except pharmacies and food markets will be closed in response to the country's outbreak. The tighter restrictions on daily life are the government’s latest effort to respond to the fast-moving crisis that took Italy’s number of cases from three to 12,462 in less than three weeks.

Credit: AP
President Donald Trump speaks in an address to the nation from the Oval Office at the White House about the coronavirus Wednesday, March, 11, 2020, in Washington. (Doug Mills/The New York Times via AP, Pool)