President Trump: US to deploy anti-drug Navy ships near Venezuela 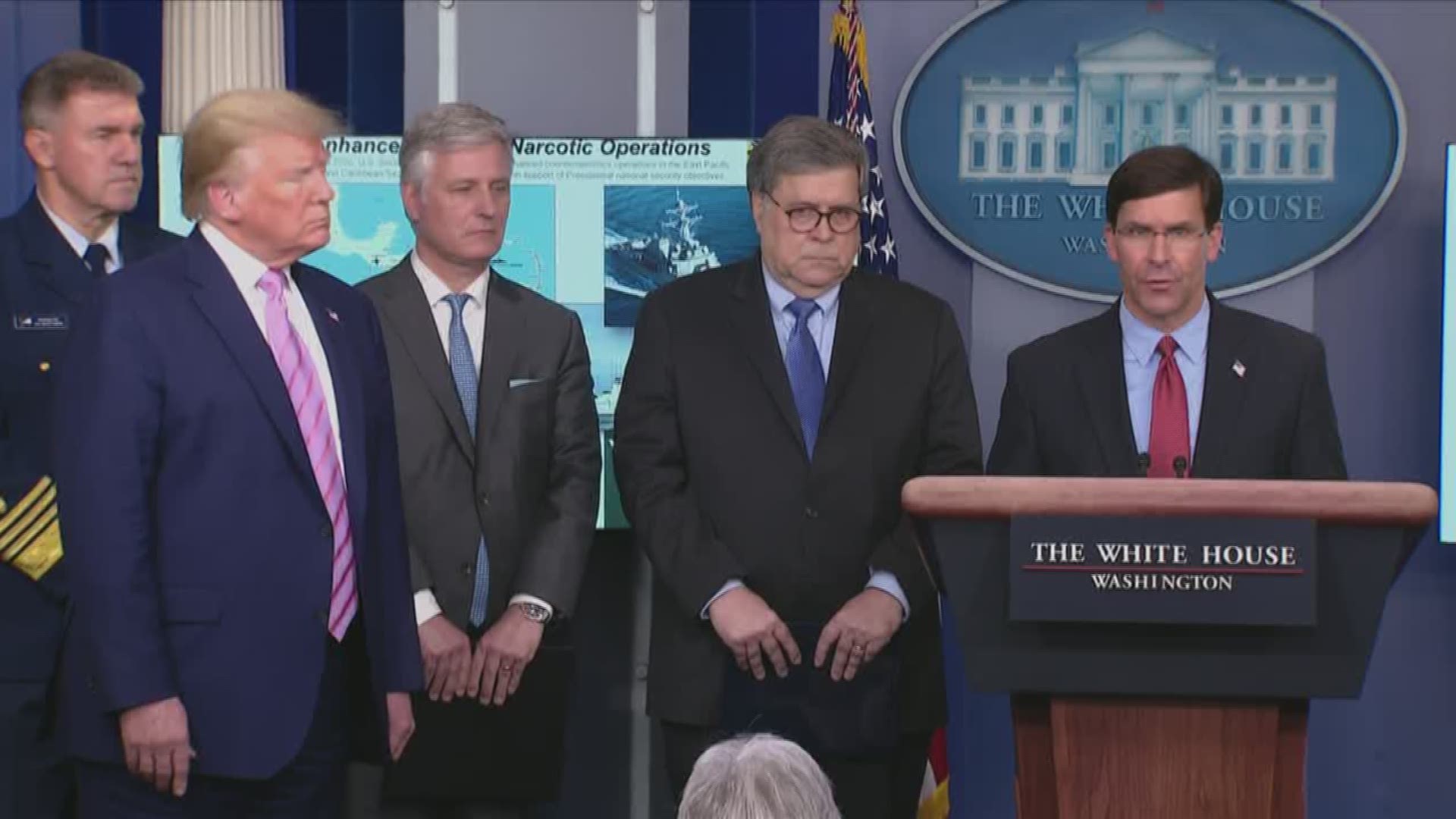 MIAMI — President Donald Trump announced Wednesday that Navy ships are being moved toward Venezuela as his administration beefs up counter-narcotics operations in the Caribbean following a U.S. drug indictment against Nicolás Maduro.

The president's announcement was a break from the daily White House press briefing to discuss the coronavirus pandemic, which has left much of the country in lock-down and which the government warns could cause 100,000 to 240,000 deaths.

“The Venezuelan people continue to suffer tremendously due to Maduro and his criminal control over the country, and drug traffickers are seizing on this lawlessness,” Defense Secretary Mark Esper said after the president's announcement.

The mission involves sending additional Navy warships, surveillance aircraft and special forces teams to nearly double the U.S. counter-narcotics capacity in the Western Hemisphere, with forces operating both in the Caribbean and eastern Pacific. Esper said the mission would be supported by 22 partner nations.

“As governments and nations focus on the coronavirus there is a growing threat that cartels, criminals, terrorists and other malign actors will try to exploit the situation for their own gain,” said Trump. "We must not let that happen."

The enhanced mission has been months in the making but has taken on greater urgency following last week's indictment of Maduro, Venezuela's embattled socialist leader, and members of his inner circle and military. They are accused of leading a narcoterrorist conspiracy responsible for smuggling up to 250 metric tons of cocaine a year into the U.S., about half of it by sea.

RELATED: Many in Venezuela struggle to afford food during crisis

“If I was just indicted for drug trafficking by the United States, with a $15 million reward for my capture, having the U.S. Navy conducting anti-drug operations off my coast would be something I would worry about," said Sen. Marco Rubio, a Florida Republican who has been among those calling for a tougher stance against Maduro.

It also comes as Maduro steps up attacks on his U.S.-backed rival, Juan Guaidó. Maduro’s chief prosecutor ordered Guaidó to provide testimony Thursday as part of an investigation into an alleged coup attempt. Guaidó, the head of Venezuela's congress who is recognized as his country's legitimate leader by the U.S. and almost 60 other nations, is unlikely to show up, raising the possibility he could be arrested. The U.S. has long insisted it will not tolerate any harm against Guaido.

“No matter where you sit ideologically, any move to try to bring democracy back to Venezuela requires first recognizing the criminal nature of the Maduro regime, and making moves that scare the regime into negotiating," said Raul Gallegos, a Bogota, Colombia-based director in the Andean region for Control Risks, a consulting group. 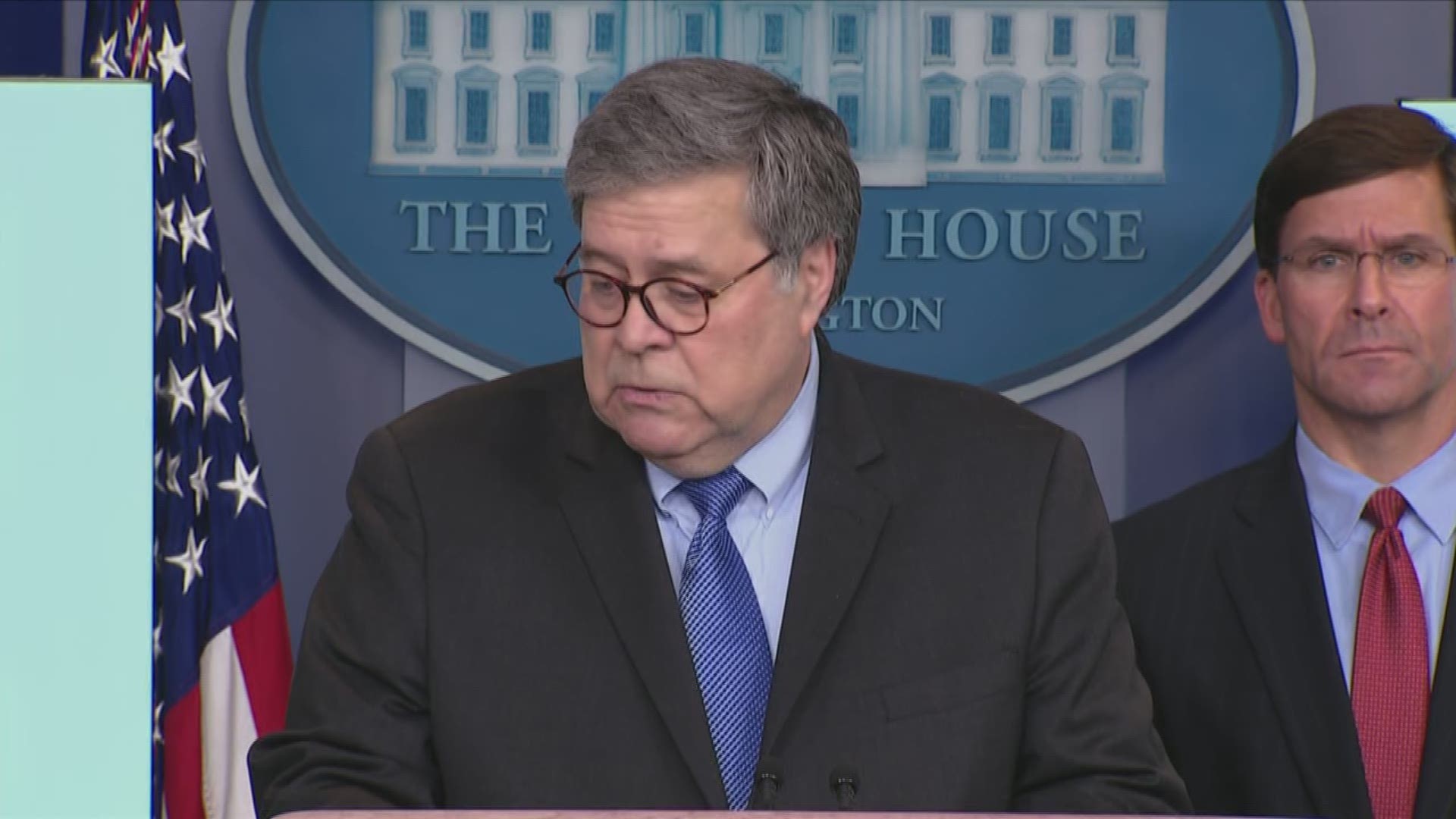 Maduro has blasted the Trump administration’s offer of a $15 million reward for his arrest, calling it the work of a “racist cowboy” aimed at getting U.S. hands-on Venezuela’s vast oil reserves, the world's largest. He also points out that the vast majority of cocaine leaves South America from Colombia, a staunch U.S. ally.

Others have faulted a U.S. plan, unveiled Tuesday by Secretary of State Mike Pompeo, to create a five-member council without Maduro or Guaidó to govern the country until elections can be held within a year. While its the first attempt in months by the U.S. to seek a negotiated solution to Venezuela's stalemate, coming on the heels of the indictments many say it has little hope of succeeding and likely to drive Maduro farther away from the path of dialogue.

The Trump administration has long insisted that all options are on the table for removing Maduro, including military ones. Still, there’s no indication then, or now, that any sort of U.S. invasion is being planned.

Rather, the sending of ships fits into a longstanding call by the U.S. Southern Command for additional assets to combat growing antinarcotics and other security threats in the hemisphere.

In January, another Navy vessel, the USS Detroit, conducted a freedom of navigation operation off the coast of Venezuela in a show of pressure against Maduro.

“That presence sends a big statement about U.S. commitment, it sends a big statement to our friends, it reassures them, and then to our adversaries that those are capable performers,” Adm. Craig Faller, the head of the U.S. military's Southern Command, said in congressional testimony last month.

The report of the planned deployment comes two days after one of Venezuela's naval patrol boats sank after colliding with a Portuguese-flagged cruise ship near the Venezuelan-controlled island of La Tortuga. Maduro accused the ship of acting aggressively and said it was possibly carrying “mercenaries” seeking his ouster.

“You have to be very naive to see this as an isolated incident,” Maduro said Tuesday night on state TV.

But Columbia Cruise Services, the operator of the cruise ship, said the patrol boat fired gunshots and than purposely rammed into the liner at speed. There were no passengers on board and none of its 32 crew members were injured, the company said.