Teacher corrects White House letter with 'many silly mistakes,' sends it back to Trump

In her 17 years of teaching English in South Carolina, this teacher said she'd 'never, ever, received a letter with this many silly mistakes.' 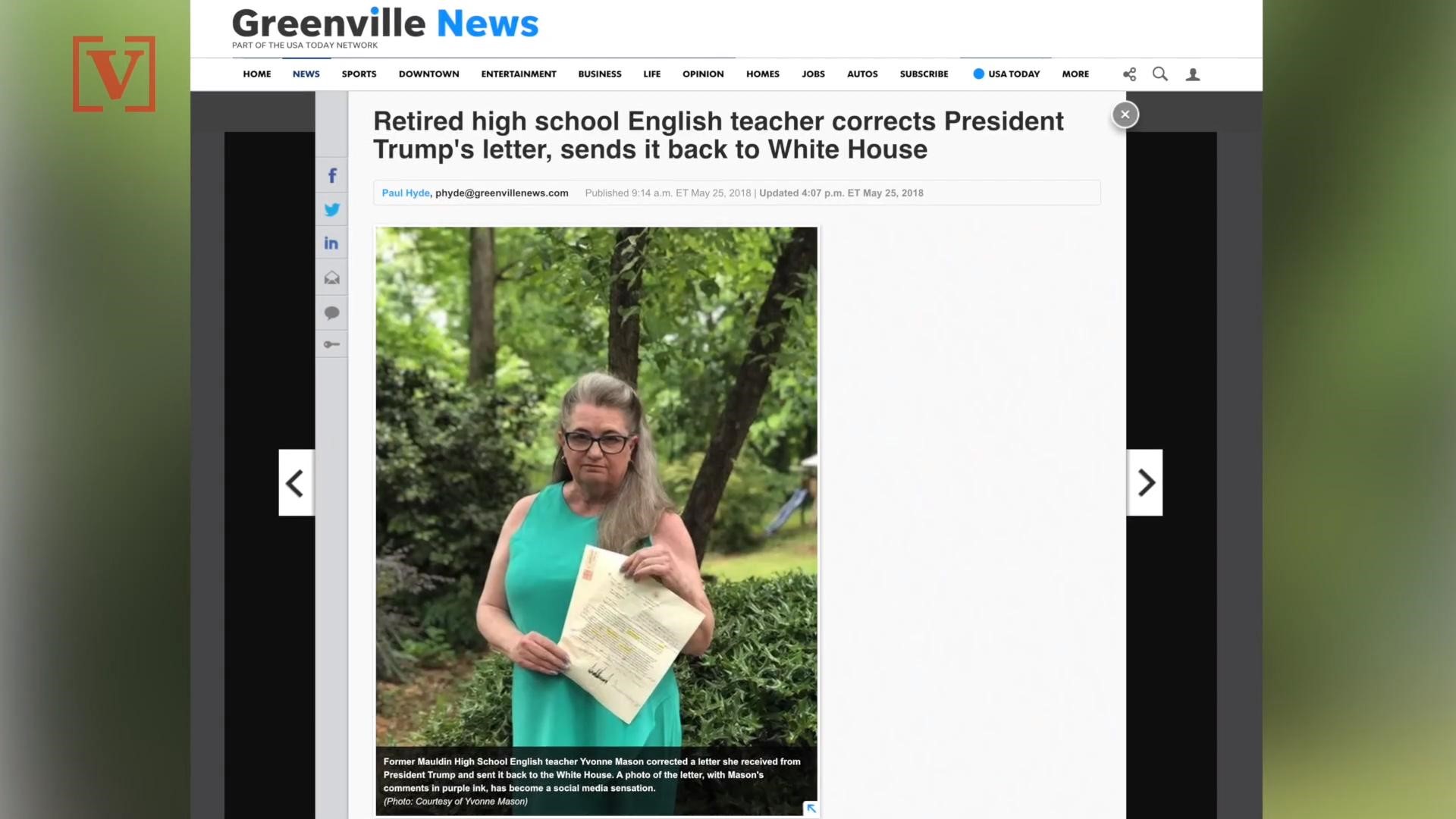 In 17 years of teaching English composition in South Carolina public schools, Yvonne Mason had seen these blunders many times before.

But Mason wasn't grading a student paper. She was reading a letter she received from President Donald Trump.

"I have never, ever, received a letter with this many silly mistakes," Mason said.

The former Mauldin High School teacher promptly did what she had done thousands of times before: She corrected the writing and returned it, this one going back to the White House.

Mason recognizes, of course, that the form letter she received from the president was very likely written by a staff member, not Trump, though the letter does include Trump's signature. It came in reply to a letter she'd written about the Feb. 14 school shooting in Florida.

Credit: Courtesy of Yvonne Mason via USA Today
Former Mauldin High School English teacher Yvonne Mason corrected a letter she received from President Trump and sent it back to the White House. A photo of the letter, with Mason&#39;s comments in purple ink, has become a social media sensation.

A photo of Mason's corrections has been widely shared on social media.

"When you get letters from the highest level of government, you expect them to be at least mechanically correct," Mason said.

Using her signature purple ink — since harsh red ink is discouraged by some educators these days — Mason identified 11 instances of faulty capitalization in Trump's letter.

"'Federal' is capitalized only when used as part of a proper noun, e.g. the name of an agency," Mason wrote.

She resisted the idea of attaching a grade to the letter.

The Greenville News reached out to the White House Office of Presidential Correspondence, but officials were unavailable for comment.

Mason, who taught English at middle and high schools for 17 years before retiring last year, is a devoted rhetorical activist, writing letters, emails and faxes to state, local and federal officials.

A recent project had Mason, currently an Atlanta resident, penning a postcard every day for a year to Trump.

"You can choose to be an active part of this democracy in myriad ways," said Mason, who is also a former actress at Greenville's Cafe and Then Some and an author of a book of criticism about Southern writer Clyde Edgerton. "I choose to write because I'm a good writer, and I'm funny.

"When I taught school for 17 years, I taught my kids in English that the way you present yourself in writing says a lot about who you are, about what you care about, about whether or not you care to get it right."

Trump's letter doesn't respond specifically to Mason's earlier letter to the president. In her letter, Mason asked Trump to meet individually with the family members of the victims of the shooting at Marjory Stoneman Douglas High School. Trump's return letter talks in general terms about school safety.

"It didn't address the letter I wrote," Mason said.

Mason's comments also draw attention to redundant expressions and overuse of the pronoun "I" in Trump's letter. And there's a dangling modifier to boot.

"It's stylistically appalling," she said.

Mason, an advocate of "clear, precise writing," directs Trump to the government website plainlanguage.gov, dedicated to encouraging federal officials to write with clarity and specificity.

"Part of the idea of clear, precise writing is abiding by grammatical and mechanical standards so everyone can be on the same page," Mason said. "Otherwise, you're going to be misunderstood."

Mason said she always emphasized to her students that they needed strong communication skills to be full participants in American democracy.

"Language is the currency of power," she said.

Not all elected officials are poor correspondents, Mason said.

"Lindsey Graham, or his people, writes exquisite letters," Mason said of the state's Republican senator. "I give him credit for that. They are far more on-topic. I understand the nature of form letters, but Graham's are written as if they're addressing your particular concern."