The Defense Department had ordered the paper to shut down following the Pentagon’s move earlier this year to cut the $15.5 million in funding. 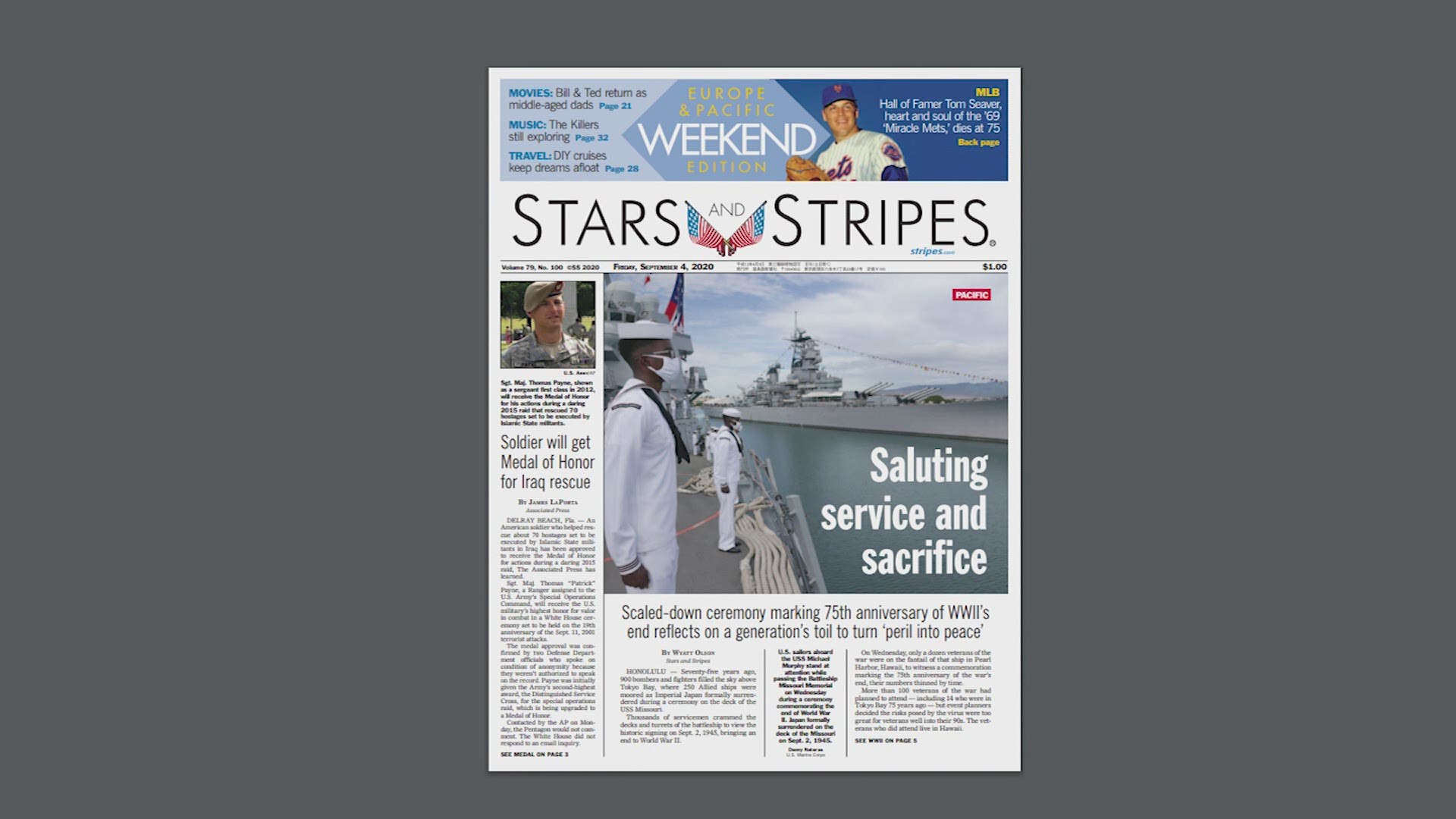 The Defense Department is rescinding its order to shut down the military’s independent newspaper, Stars and Stripes, in the wake of a tweet late last week by President Donald Trump vowing to continue funding the paper.

In an email to Stripes’ publisher Max Lederer, Army Col. Paul Haverstick said the paper does not have to submit a plan to close. Haverstick, acting director of the Pentagon’s Defense Media Activity, said a formal memo is being drafted that will rescind the order to halt publication by Sept. 30, and dissolve the organization by the end of January. The email was obtained by The Associated Press.

“The memo will be provided once it is completed and properly vetted and approved within the Department,” said Haverstick's email. “We are trying to get this completed by the weekend, but this timeline may shift based on vetting.”

The Defense Department had ordered the paper to shut down following the Pentagon’s move earlier this year to cut the $15.5 million in funding for Stars and Stripes from the budget. Last Friday, as news of the shutdown order trickled out, Trump abruptly tweeted his opposition to the plan.

“The United States of America will NOT be cutting funding to @starsandstripes magazine under my watch,” Trump tweeted. “It will continue to be a wonderful source of information to our Great Military!”

The United States of America will NOT be cutting funding to @starsandstripes magazine under my watch. It will continue to be a wonderful source of information to our Great Military!

Trump’s tweet came as he fought off accusations that he called service members killed in World War I “losers” and “suckers” during an event in France in 2018. The comments, first reported by The Atlantic and confirmed by The Associated Press, shined a fresh light on Trump’s previous public disparaging of American troops and military families and they delivered a new campaign issue to his Democratic rival Joe Biden, less than two months from Election Day.

Trump was alleged to have made the comments about the war dead as he was set to visit the Aisne-Marne American Cemetery during a trip to France in November 2018.

The Trump White House hadn’t spoken out against the Pentagon plan to close the paper before last Friday, even though it’s been in the works and publicly written about for months and was in the president’s budget request. Friday afternoon, however, Trump worked to shore up his reputation as a staunch supporter of the nation’s armed services.

Members of Congress have objected to the defunding move for months. And senators sent a letter to Defense Secretary Mark Esper last week urging him to reinstate the money. The letter, signed by 15 senators — including Republicans and Democrats — also warned Esper that the department is legally prohibited from canceling a budget program while a temporary continuing resolution to fund the federal government is in effect.

The House-passed version of the Pentagon's 2021 budget contains funding for the paper’s publication, but the Senate has not yet finalized a defense funding bill.

“Stars and Stripes is an essential part of our nation’s freedom of the press that serves the very population charged with defending that freedom,” the senators said in the letter.

Sen. Lindsey Graham, R-S.C., in a separate letter to Esper in late August, also voiced opposition to the move, calling Stripes “a valued ‘hometown newspaper’ for the members of the Armed Forces, their families, and civilian employees across the globe.” He added that “as a veteran who has served overseas, I know the value that the Stars and Stripes brings to its readers.”

Haverstick, in his new email, also said the department is looking into how it will fund Stripes for the next year, since it was not budgeted. And he said the paper will be required to submit a budget plan for the next year.

The first newspaper called Stars and Stripes was very briefly produced in 1861 during the Civil War, but the paper began consistent publication during World War I. When the war was over, publication ended, only to restart in 1942 during World War II, providing wartime news written by troops specifically for troops in battle.

Although the paper gets funding from the Defense Department, it is editorially independent and is delivered in print and digitally to troops all over the world.

RELATED: Pentagon: US will respond if Russia bounty reports are true