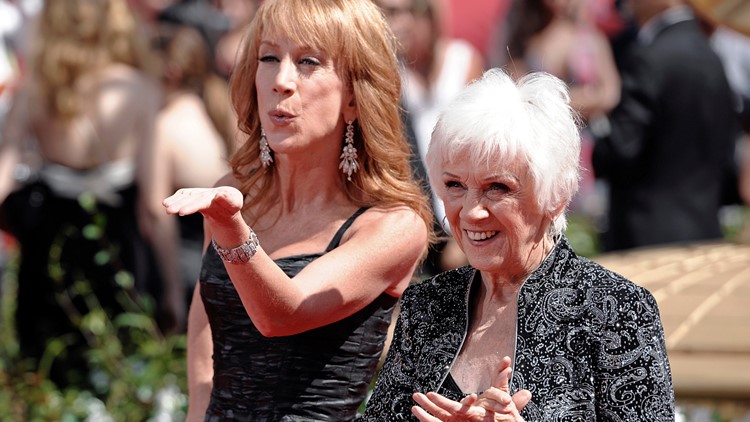 Photo by: AP
FILE - In this Aug. 29, 2010 file photo, Kathy Griffin and her mother Maggie Griffin arrive at the 62nd Primetime Emmy Awards in Los Angeles.

The mother of comedian Kathy Griffin, who inspired many of the jokes in her daughter's standup routines, has died. Maggie Griffin was 99.

Kathy Griffin tweeted that “My Mom, the one and only, Maggie Griffin, passed away" Tuesday.

The impish and quick-tongued Maggie Griffin was a frequent presence in her daughter's reality show, “Kathy Griffin: My Life on the D-List," in the early 2000s.

More often than not, she was holding a glass of wine.

Griffin revealed on Twitter in 2019 that her mother had “rapidly fallen into the throes of dementia.”

"My Mom, the one and only, Maggie Griffin, passed away today," Griffin tweeted. "I am gutted. My best friend. I’m shaking. I won’t ever be prepared. I’m so grateful you guys got to be part of her life. You knew her. You loved her. She knew it. Oh, and OF COURSE she went on St Patrick’s Day.