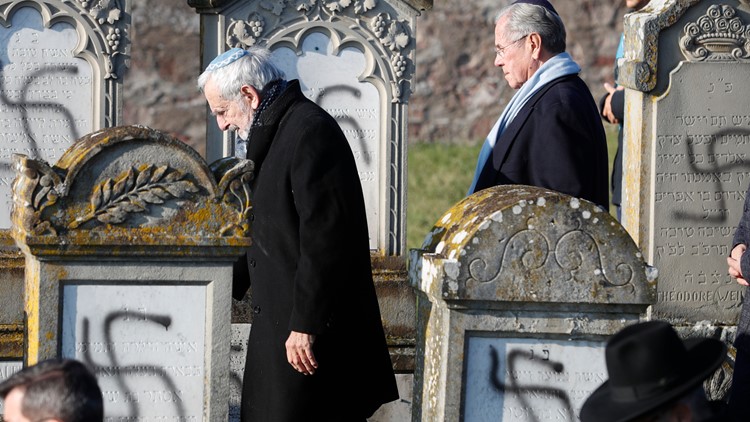 Photo by: AP
Members of the Jewish community walk amid vandalized tombs in the Jewish cemetery of Westhoffen, west of the city of Strasbourg, eastern France, Wednesday, Dec. 4, 2019. Regional authorities in eastern France say vandals have scrawled anti-Semitic inscriptions, including swastikas spray-painted in black, on 107 tombs in a Jewish cemetery. (AP Photo/Jean-Francois Badias)

The French government is creating a national anti-hate crime office following the discovery of anti-Semitic graffiti at a Jewish cemetery in eastern France.

Interior Minister Christophe Castaner made the announcement Wednesday in the town of Westhoffen, where vandals scrawled swastikas and other anti-Semitic inscriptions on 107 tombs the day before.

Speaking alongside Jewish leaders, Castaner condemned the graffiti as a sign that "hate is on our national territory."

"We must respect the right to believe," he said.

A special police unit has begun investigating the incident, Castaner said, and the new national office will seek to fight hate crimes.

The graffiti marked the latest in a string of anti-Semitic acts in the Bas-Rhin region. Anti-Semitic graffiti was also discovered Tuesday in the eastern French village of Schaffhouse-sur-Zorn, authorities said.