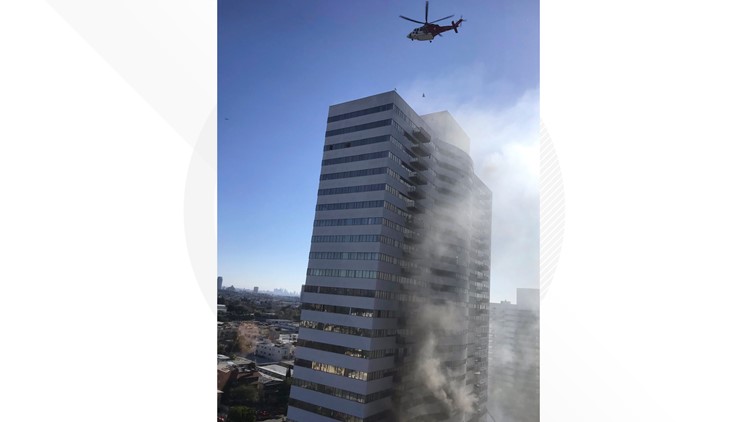 Photo by: AP
This photo provided by Megan Feldman shows a helicopter flies over a residential building that is one fire in Los Angeles, Wednesday, Jan. 29, 2020. Firefighters swarmed the building on the city's west side and people could be seen on the roof as flames and smoke rise from the sixth floor. A helicopter was hoisting people off the roof. (Megan Feldman via AP)

Firefighters responded to a blaze in a 25-story Los Angeles residential building. Authorities say there were reports that an unspecified number of persons jumped to escape the flames. Those reports were later determined to be unfounded, and the LA Fire Department believes a person they rescued with an extended aerial ladder might have left the sight of onlookers in the heavy smoke and this possibly caused confusion.

Firefighters swarmed the building on the city's west side Wednesday morning and people could be seen on the roof as flames and smoke rose from the sixth floor.

Fire Department spokesman Brian Humphrey initially said an undetermined number of persons were reported to have jumped. The Los Angeles Fire Department later said in a presser that no one had jumped from the building. There have been no deaths reported, and eight people were being treated. Most of the injured suffered from smoke exposure and six were transported to area hospitals. One person was said to be in grave or critical condition according to the LA Fire Department.

At least one individual was contemplating jumping, but firefighters were able to talk them out of it and prevent them from jumping, the LAFD said in a presser Wednesday. According to firefighters they will be investigating for the rest of Wednesday into Thursday to determine a cause. There was no information Wednesday afternoon given by authorities regarding anyone taken into custody in relation to the fire, according to the Los Angeles Fires Department.

A large inflatable bag was set up on the ground on one side of the building. A Fire Department helicopter was hovering overhead. Traffic in the area is being rerouted to avoid the area.

The fire broke out in a residential tower at Barring Plaza located at 11740 West Wilshire Boulevard in Los Angeles a little after 8:30 a.m. in a sixth floor unit, according to the L.A. Fire Department. 335 fire personnel responded by ground and air, and were assisted by the Santa Monica Fire Department, the LAPD, the LA Sheriff and other agencies.

According to the the LAFD, the fire was exacerbated by winds in the area and was extinguished one hour and 19 minutes after it was reported.

LAFD spokesman Brian Humphrey told CBS, “We arrived very quickly after the fire was reported, within moments, to find heavy fire pouring out of this sixth floor unit.”

Video from local crews showed that the fire was out, but black smoke was still coming from the building. There were inflatable air cushions placed on the ground by firefighters.

A Los Angeles Fire Department spokesperson told reporters that people who live in buildings should always remember to close their doors if your apartment is on fire, to prevent the spread of fires.