French companies Total and L'Oreal are the latest to pledge large sums for the reconstruction of the Notre Dame after a fire destroyed much of the cathedral's roof.

Each company has pledged to donate 100 million euros ($113 million) towards rebuilding the historic cathedral.

Oil and gas giant Total said it wanted "to help the reconstruction of this architectural jewel. Cosmetic's maker L'Oreal called the cathedral "a symbol of French heritage and of our common history."

Bouygues construction group CEO Martin Bouyges has also announced that he and his brother would donate 10 million euros.

A statement Tuesday from LVMH said the luxury goods group and the Arnault family would make the donation to a rebuilding fund for the cathedral, which was consumed by flames Monday evening.

LVMH called the cathedral a "symbol of France, its heritage and its unity."

Before Arnault's announcement, Francois-Henri Pinault and his billionaire father Francois Pinault said they were immediately giving 100 million euros from their company, Artemis, to help finance repairs to the cathedral devastated by fire Monday night.

A statement from Francois-Henri Pinault said: "This tragedy impacts all French people" and "everyone wants to restore life as quickly as possible to this jewel of our heritage."

Pinault owns the company Kering, which own luxury fashion brands like Gucci and Saint Laurent, according to The Hill.

French President Emmanuel Macron has vowed to rebuild the cathedral and says a national fundraising campaign to restore Notre Dame would be launched Tuesday.

The French leader says he is seeking international help to restore the Paris landmark and calls on the world’s “greatest talents” to help.

The catastrophic fire engulfed the upper reaches of Paris' soaring Notre Dame Cathedral as it was undergoing renovations, threatening one of the greatest architectural treasures of the Western world as tourists and Parisians looked on aghast from the streets below.

The blaze collapsed the cathedral's spire and spread to one of its landmark rectangular towers, but Paris fire chief Jean-Claude Gallet said the church's structure had been saved after firefighters managed to stop the fire spreading to the northern belfry.

The 12th-century cathedral is home to incalculable works of art and is one of the world's most famous tourist attractions, immortalized by Victor Hugo's 1831 novel "The Hunchback of Notre Dame."

How you can donate to help rebuild Notre Dame

There are several verified organizations accepting donations to help rebuild the Notre Dame Cathedral, including the official website for the cathedral.

Additionally, the Basilica of the National Shrine of the Immaculate Conception in D.C. is also collecting donations that will be used to support the Cathedral of Notre Dame and those affected by the tragedy. Another option is to donate to France's Heritage Foundation, which has already collected more than 7 million euros as of Tuesday afternoon. 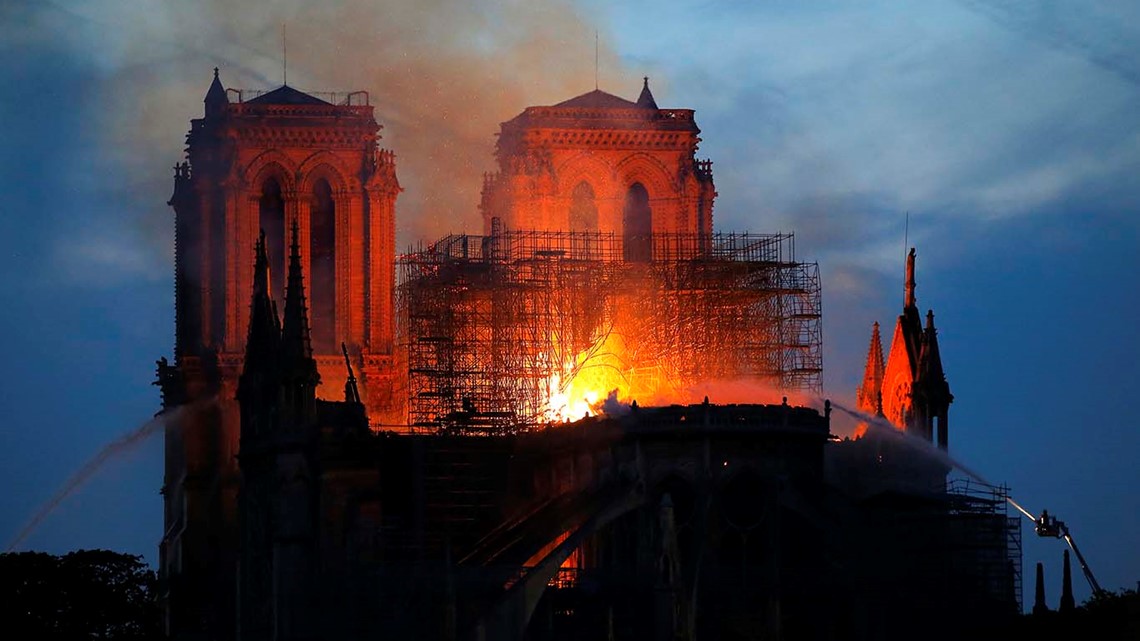