'He was a prince': Rev. Al Sharpton delivers eulogy for Daunte Wright at Minneapolis funeral

"You thought he was just some kid with an air freshener, he was a prince," Sharpton said. "Minneapolis is stopped today to honor the prince of Brooklyn Center." 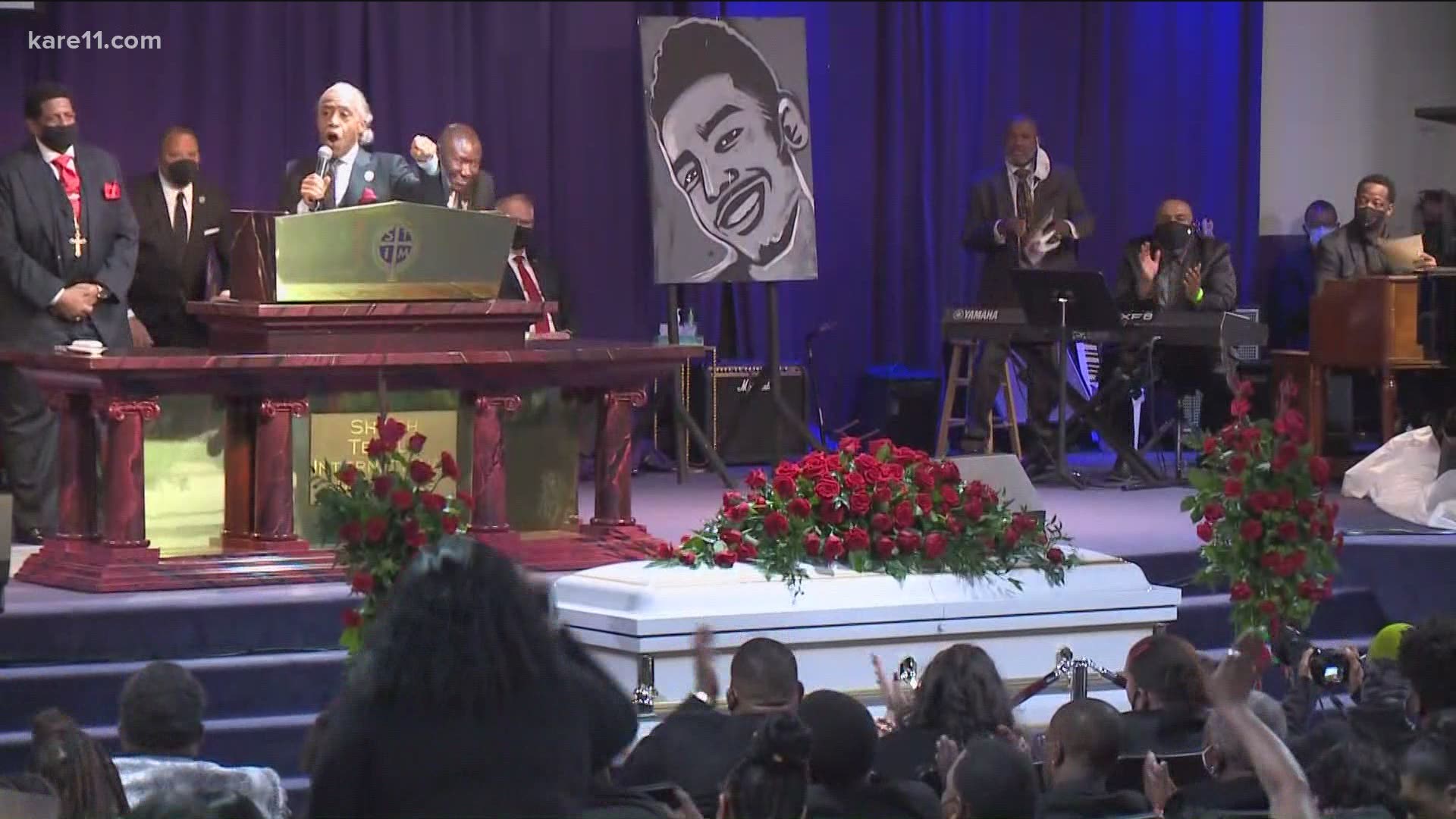 MINNEAPOLIS — Daunte Wright, whose name has become familiar across the world in recent days, was honored by national civil rights leaders and lawmakers at his Minneapolis funeral on Thursday.

Rev. Al Sharpton delivered the eulogy for Wright, who was shot and killed by former Brooklyn Center officer Kim Potter during a traffic stop on April 11. The shooting happened during the last days of the trial for Derek Chauvin, who was convicted of murder Tuesday in the 2020 death of George Floyd.

The service was held at Shiloh Temple International Ministries in Minneapolis. Sharpton read from Isaiah 59:8-9: "The way of peace they know not, and there is no judgment in their goings. Therefore is judgment far from us, neither doth justice overtake us."

He said the subject of his eulogy was, "No justice, no peace." 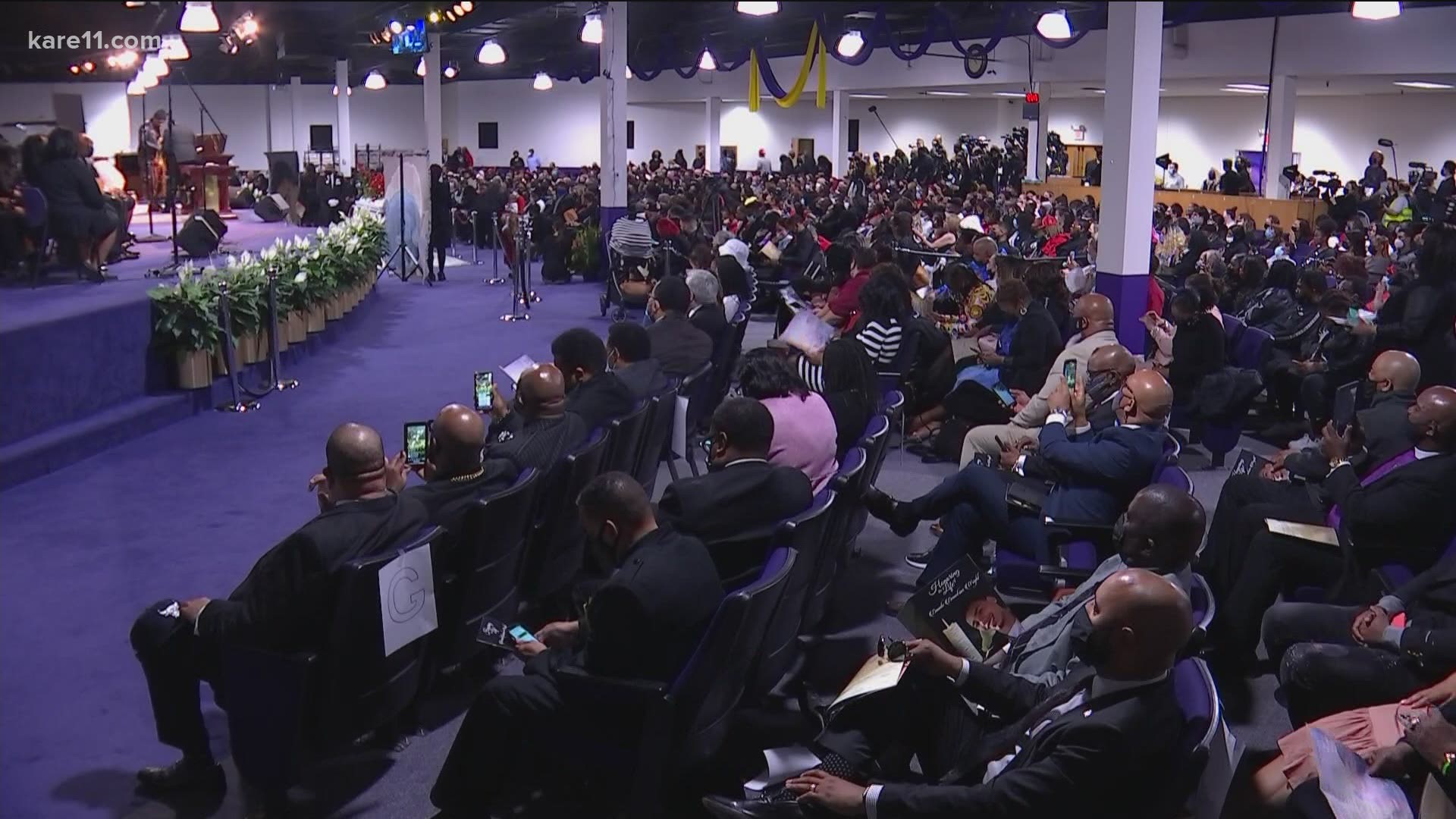 Sharpton said that phrase started in the Bible, before it was ever uttered at a protest.

"The absence of justice is the absence of peace," he said. "And when we say that we're not talking about violence. Because there is a confusion in this country between peace and quiet. Some of us are told to shut up and just be quiet. And you call that peace, but peace is the presence of justice. You can't tell us to shut up and suffer. We must speak up when there is an injustice." 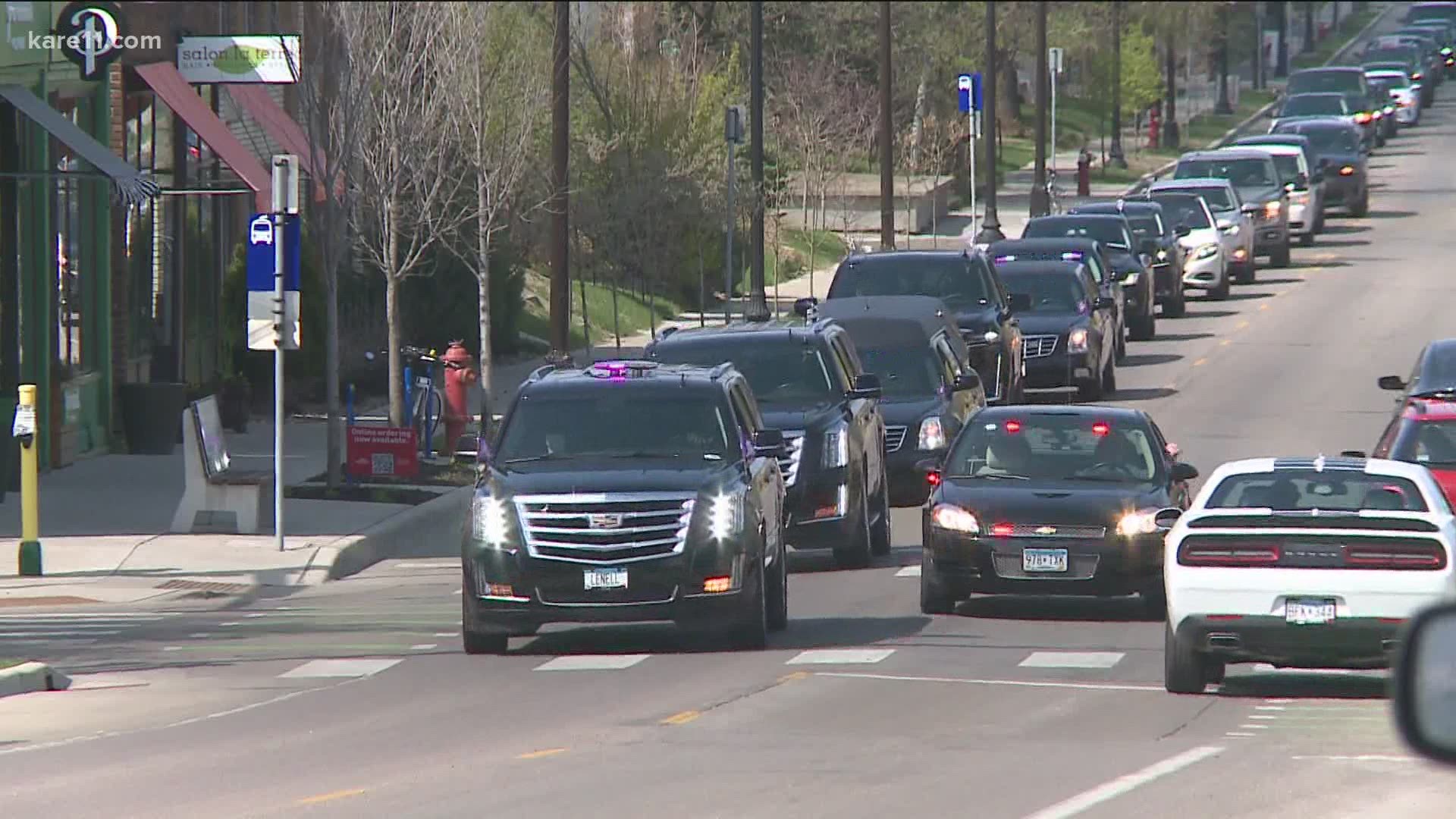 Sharpton said someone commented to him that they had not seen a funeral procession like this since Prince died.

"Well, we came to bury the prince of Brooklyn Center," he said. "We come from all over the country because you hurt one of our princes. That's why we're in this temple with purple all over, because it represents royalty. You thought he was just some kid with an air freshener, he was a prince. And all of Minneapolis is stopped today to honor the prince of Brooklyn Center."

Sharpton went on, "If you knew who we were, if you understood that we were divine decisions that God made, if you understood that his mother and father broke the racial barrier lines, and raised him in an interracial home that used to be against the law. But they defied the color barriers, a Black man and a white woman, and raised children to not hate nobody, and he was a prince of that raising. If you knew who he was. You have been caught with a mistaken identity. You keep thinking that we're somebody we're not."

"For every pharaoh there was a Moses," he said.

RELATED: Public viewing for Daunte Wright in Minneapolis ahead of Thursday memorial

Sharpton emphasized the camaraderie among Daunte Wright and others killed by police.

Sharpton said that while Wright played center on his high school's basketball team, "Now he's the center of a movement of God."

HAPPENING NOW: Daunte Wright’s family walking into the church for the funeral service. His mother walked in alongside @TheRevAl @kare11 pic.twitter.com/14WIk2ezD6

Wright was a father, brother, son and grandson. His mother Katie Wright said through tears that she stayed up until 3:30 a.m. "so nervous and scared" about what she would say about her son. The crowd responded by applauding her.

"I never imagined that I would be standing here," she said. "The roles should be completely reversed, my son should be burying me. My son had a smile that was worth a million dollars. When he walked in the room he lit up the room. He was a brother, a jokester, he was loved by so many. He's going to be so missed."

Daunte's father, Arbuey, said he didn't have the words to express himself. He simply told the crowd, "That was my son."

"He was literally the life of the party," Daunte's brother said. "If you heard his laugh, it's contagious."

RELATED: 'There's never going to be justice for us': Daunte Wright's mother speaks out after Brooklyn Center officer charged

Ben Crump, the attorney who represents both the Floyd and the Wright families, was the first speaker at the funeral. He began by asking Attorney General Keith Ellison, who was sitting on stage, to seek justice for Wright by prosecuting Potter. Ellison's team led the prosecution of Chauvin.

Crump had the family of George Floyd stand up, telling the crowd that this time last year they joined a "fraternity" that no one wants to be in, and now they are supporting Wright's family.

"We are all gonna walk together to get the George Floyd Justice in Policing Accountability Act made into law that will live forever for our children and our children's children," he said.

"How did officer Potter see Daunte Wright? But more importantly, how does America see our children?" Crump asked, turning to address his remarks to Katie Wright. "Because if she saw your child, Katie, like she saw her child, then I do not think she would have even reached for a Taser, much less a gun."

"It's too often that traffic stops end up as deadly sentences," Crump said. "We can't worry about what others say about us as we stand up for our children."

Attendance at the funeral was limited, but Wednesday the family invited the community to a public viewing to pay their respects to Wright.

The service began with a scripture, prayer, and a silent group reading of Wright's obituary. Music was performed by Jovonta Patton and the Shiloh Temple Mass Choir, and by trumpeter Keyon Harrold. As Harrold played "Amazing Grace," artist Ange Hillz painted a portrait of Wright on a canvas displayed on stage.

Hillz also painted a picture of Floyd at his funeral last year.

Kim Potter and the Brooklyn Center police chief both resigned after the shooting. Potter is charged with second-degree manslaughter in Wright's death. If convicted her presumptive sentence would be four years according to Minnesota sentencing guidelines, although the statutory maximum is 10.

Katie Wright has spoken publicly several times since her son's death. She said she wants a more serious charge for Potter, but does not believe she will ever see justice.

“Second-degree manslaughter is not OK,” she said. “I’m not OK with that. That’s not right. She murdered my son.”

Police said they pulled Wright over for expired tags, but Wright's mother said he told her on the phone that it was for an air freshener hanging in his window. The air freshener has since become a symbol for protesters calling for an end to racial profiling in police stops.

Sharpton referenced the air freshener in his eulogy, saying, "We can't breathe" due to the filthy air and stench of injustice. He called for federal legislation to force police reforms nationwide.

"It's time to bring a new day where we don't have to videotape when we see a badge, where we know they're there to protect and serve, not treat us like we're already convicted," he said. "When we put that badge on you we expect you to act like somebody who is civilized and respectful."

The Family of #GeorgeFloyd just arrived to attend the funeral of #DaunteWright @wfaa @kare11 pic.twitter.com/tNFk43d4GT

Sharpton issued a challenge to those who say they believe in the Bible.

"You need to stop quoting it and start reading it," he said. "It's a Bible of justice."

Sharpton also delivered the eulogy at George Floyd's Minneapolis memorial service nearly a year ago. "You changed the world, George," he said during that address.

The conviction for Derek Chauvin in Floyd's death marks the first time a white officer in Minnesota has been found guilty of murdering a Black civilian. Crump, who now represents Daunte Wright's family, represented Floyd's family when they won a record $27 million settlement from the city of Minneapolis.

Rep. Ilhan Omar and Gov. Tim Walz both took the stage to read proclamations in honor of Wright, one from Congress and one from the state of Minnesota.

Earlier in the day, Walz also invited residents to join him in a two-minute moment of silence to honor Wright’s life at noon.

“Nothing can bring Daunte back to his loved ones,” the governor said in a statement on Twitter. "But we will continue working to enact meaningful, lasting police accountability and reform.”

Sen. Amy Klobuchar closed the funeral service by saying, "We must pass the George Floyd Justice in Policing Act."

She referenced a photo of Daunte Wright holding his son that has now been viewed across the country.

"That's when we see the enormous hole Daunte leaves in the world," Klobuchar said. "That's when we remember he won't be there for his son's second birthday."

1 / 13
AP
A choir sings behind the casket of Daunte Wright during his funeral services at Shiloh Temple International Ministries in Minneapolis, Thursday, April 22, 2021. Wright, 20, was fatally shot by a Brooklyn Center, Minn., police officer during a traffic stop. (AP Photo/John Minchillo, Pool)