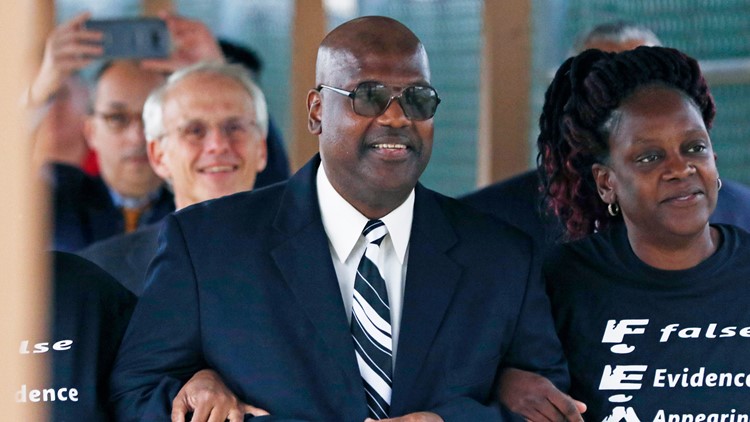 Photo by: AP
Curtis Flowers flanked by sister Priscilla Ward, right, exits the Winston Choctaw Regional Correctional Facility in Louisville, Miss., Monday, Dec. 16, 2019. Flowers' murder conviction was overturned by the U.S. Supreme Court for racial bias, and he was granted bond by a circuit judge and is free, with some conditions, for the first time in 22 years. (AP Photo/Rogelio V. Solis)

Curtis Flowers walked out of the regional jail in Louisville on Monday, hours after a judge set his bond at $250,000. His attorney Rob McDuff says a person who wants to remain anonymous has posted $25,000, the 10% needed to secure Flowers' release.

Flowers must wear an electronic monitor while awaiting prosecutors' decision whether to try him a seventh time. The U.S. Supreme Court overturned his fourth conviction in June, citing racial bias in jury selection.

Curtis Flowers, 49, is charged in the 1996 shooting deaths at a furniture store in Winona.

During a hearing Monday, a judge granted a bond request made by attorneys for 49-year-old Curtis Flowers. The judge set bond at $250,000.

Four of his convictions have been overturned, and two ended in mistrials.

Flowers was taken off death row after that decision, according to AP, and moved to a regional jail where he remains in custody because he is still under the original indictment issued in 1997.

A prosecutor has not said whether he will try Flowers for a seventh time on the same charges.