These companies are giving their employees time off for Juneteenth

The list is growing of companies that have decided to make Juneteenth, which commemorates the ending of slavery in America, a paid company holiday. 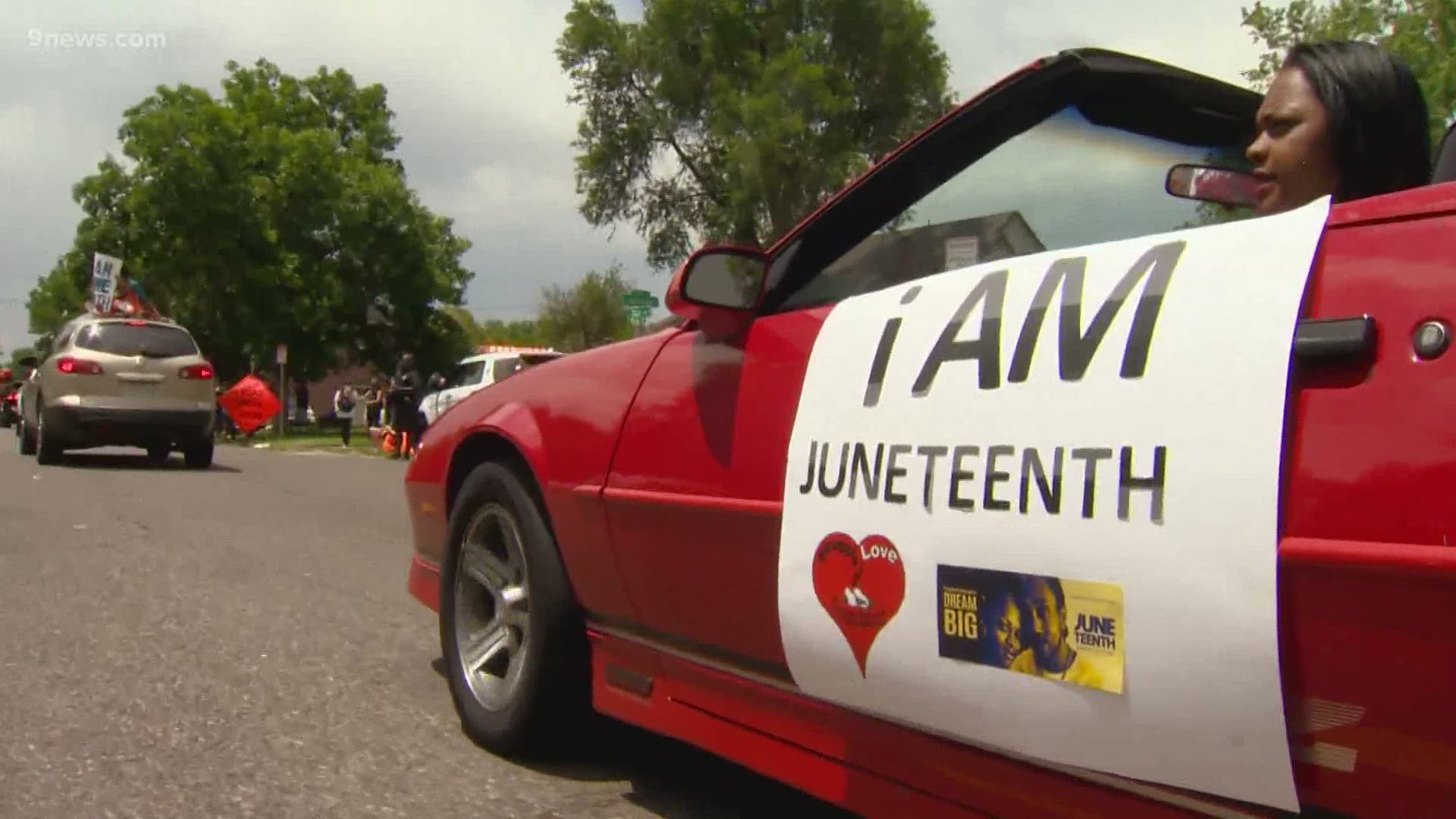 WASHINGTON — Google, Nike and Target have joined a growing list of companies around the country that have decided to give their employees time off for Juneteenth, June 19.

The decision comes as businesses balance how to fight racism and support Black employees in the wake of George Floyd's death and global protests demanding an end racial injustice and police brutality.

The June 19 holiday of Juneteenth commemorates the ending of slavery in the United States.

The Emancipation Proclamation, freeing slaves in the United States, was issued by President Abraham Lincoln in January of 1863. However, it took much longer for news of his order to spread, and didn’t reach slaves in Galveston, Texas, until June 19, 1865, when Union General Gordon Granger read the proclamation there. Generations have celebrated on June 19 ever since.

The name Juneteenth comes from a blending of the date. The holiday serves as an opportunity to cherish freedom, but also poignantly acknowledge the history of slavery in the country.

The governors of Virginia and New York have also both announced plans to make it a paid holiday.

Adobe told employees they would have Juneteenth off this year as a day "to focus on reflection and advocacy."

Fifth Third Bank plans to close all of its offices at 2 p.m. local time on Friday, June 19.

The company's CEO said in a statement that as employees observe Juneteenth "each of us should pause, reflect, and contemplate its significance and what it meant 155 years ago, what it means today, and how we might take action to make tomorrow better for everyone. While it is only one small step toward a more racially just and equitable organization and community, we believe it is a step in the right direction.”

Google has informed its employees to cancel all unnecessary meetings on June 19, according to Reuters which saw a staff memo.

“We encourage all Googlers to use this day to create space for learning and reflection, so please don’t schedule any unnecessary meetings,” the Google memo said. “Now, more than ever, it’s important for us to find moments of connection as a community.”

However, Reuters reported that the memo was only for Google staff, not the entire Alphabet company.

CEO Jill Soltau said in a memo to the company that June 19 will be an annual company holiday.

"This Friday, June 19, I ask that you take the day to honor the historic pain caused by – and lives lost to – racial inequity and celebrate racial diversity," the memo reads. "This is an opportunity to continue to learn, connect with each other, and reflect on how we can move forward and achieve permanent and lasting change. Hourly associates working to serve our customers that day will receive additional holiday pay."

LendingTree announced it would be closing on Friday, June 19 to observe Juneteenth.

In an email to employees, LendingTree founder and CEO Doug Lebda encouraged workers to "disconnect and spend time resetting but also use this time to really think about what Juneteenth represents."

The ridesharing company made the announcement on Twitter that it would be making June 19 a company holiday.

The credit card company said in a memo that it is designating Friday, June 19 as a Mastercard Day of Solidarity or June 18 for locations that have a Sunday to Thursday workweek.

"We have a way to go to bring equality and justice to all – and it won’t be easy," the memo said. "As one step, we hope this Day of Solidarity allows you to reset, refresh and extend decency and compassion to yourself and to others."

The New York Times is observing June 19 as a paid holiday this year.

"In support of our Black colleagues at this moment of global reckoning, The New York Times this year is celebrating Juneteenth, which occurs Friday, June 19," reads an announcement from the paper. "In recognition of this day, the company is offering eligible employees one paid day off to observe the holiday."

NFL Commissioner Roger Goodell announced in an internal memo to staff that the league will observe Juneteenth on Friday, June 19 as a recognized holiday and the league's offices will be closed that day.

"This year, as we work together as a family and in our communities to combat the racial injustices that remain deeply rooted into the fabric of our society, the NFL will observe Juneteenth on Friday, June 19th as a recognized holiday and our league offices will be closed," Goodell wrote. "It is a day to reflect on our past, but more importantly, consider how each one of us can continue to show up and band together to work toward a better future."

Nike CEO John Donahoe made the Juneteenth announcement in an internal memo sent to staff on Thursday, according to Yahoo Finance and Forbes. The news reports quote him as saying that recognizing the holiday is an “important opportunity to better commemorate and celebrate Black history and culture.”

Donahoe became CEO of the Oregon-based company in January. He also says Nike will launch a diversity education program for employees.

The CEO of Postmates Bastian Lehmann tweeted that Juneteenth will be a permanent company holiday.

Detroit-based mortgage company Quicken Loans said it will offer a paid holiday to employees on Juneteenth.

“We are encouraging those team members to use it to have a voice, to contribute to the community, to celebrate their identity or use it to learn more about addressing racial inequity,” Farner said.

The music streaming service announced it will make "the day that slavery ended in the United States... a permanent company holiday for all U.S. employees."

Twitter and Square CEO Jack Dorsey said Juneteenth will be a holiday for employees at both companies.

He made the announcement on Twitter saying, "A day for celebration, education, and connection." He said the holiday will be honored every year moving forward.

Target announced while stores will remain open, hourly team members who work that day will receive time and a half. Eligible Target employees have the option to take the day off with full pay, and the corporate headquarters will be closed in observance.

“We recognize that the racial trauma the country is experiencing now is not new, but throughout recent weeks there has been a sense that this time is, and has to be, different,” CEO Brian Cornell said in a statement.

Twitter and Square CEO Jack Dorsey Juneteenth will be a holiday for employees at both companies.

He made the announcement on Twitter saying, "A day for celebration, education, and connection." He said the holiday will be honored every year moving forward.

He added that "countries and regions around the world have their own days to celebrate emancipation, and we will do the work to make those dates company holidays everywhere we are present."

U.S. Bank plans to close all of its offices and bank branches at 1 p.m. local time on Friday, June 19.

The company's CEO said in a statement they are "encouraging our employees to use this time to serve in our communities, commit to inclusion and advocacy, or simply educate themselves on this very important topic.”

As part of its announcement, U.S. Bank explained that its branches would still be open in the morning on Juneteenth because this year it falls on a Friday and customers may need in-person banking services because for some it's a payday.

Vox Media is observing Juneteenth as a company holiday and it is launching a fellowship program focused on HBCUs and members of NABJ, according to a company memo from Chief Executive Jim Bankoff. Wall Street Journal media reporter Ben Mullin shared the memo on Twitter.

The photo and video editing tools company said on Twitter that "This year and beyond, VSCO will recognize #Juneteenth (June 19) as a company holiday."

Editor's note: Our company, TEGNA, announced Wednesday that it would be making Juneteenth a paid company holiday.