Adam Schiff fires back at calls by Trump, Republicans to resign

GOP members of the House Intelligence Committee told Chairman Adam Schiff they have no faith in him after his statements on Russian interference. 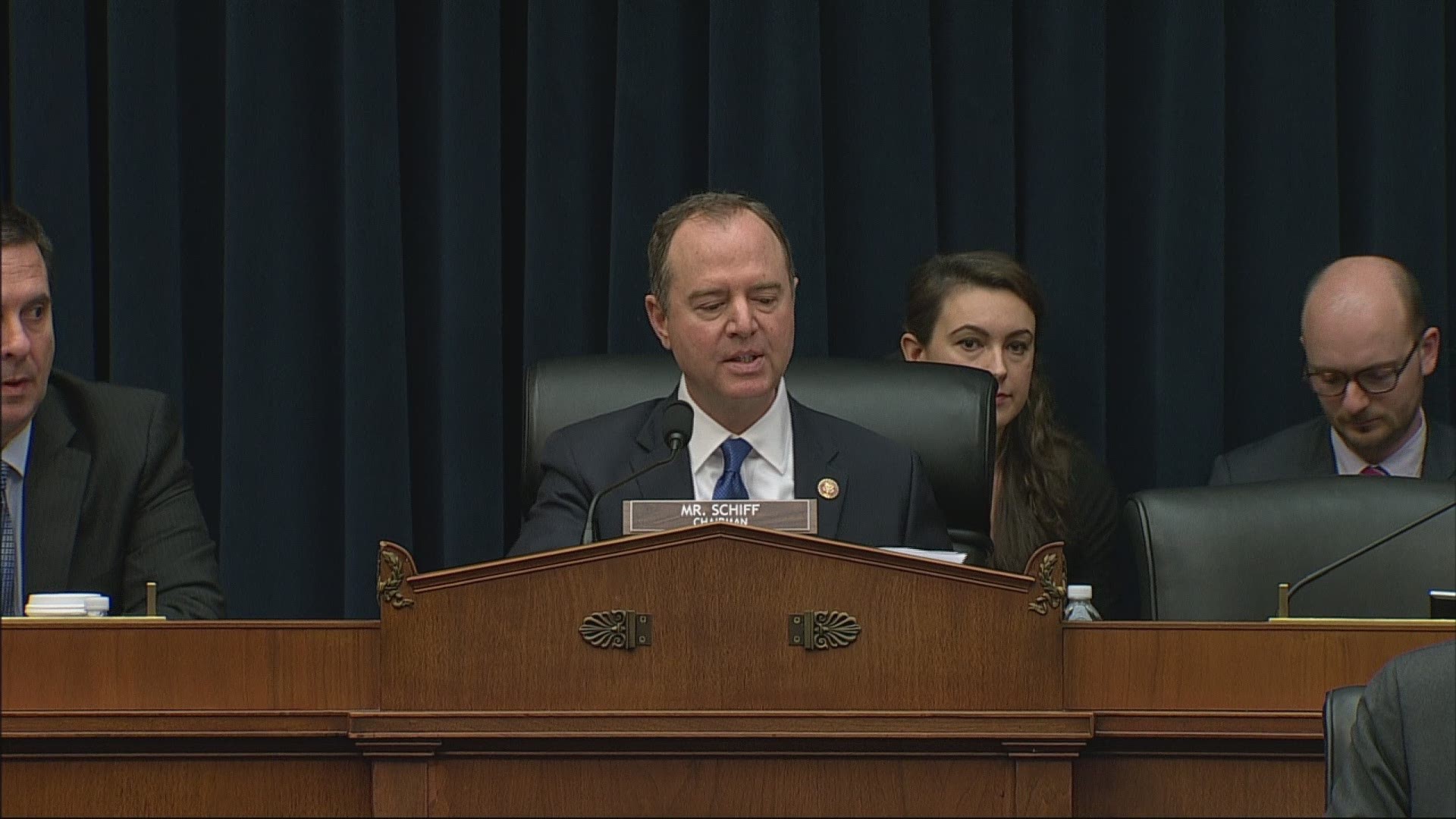 WASHINGTON — Democrats intensified their demands for Robert Mueller's full report Thursday after learning the special counsel's findings from his Trump-Russia investigation run to more than 300 pages, while President Donald Trump boasted of total exoneration based on a four-page summary by his attorney general.

House Judiciary Chairman Jerrold Nadler was told by Attorney General William Barr that there's no intention of giving the confidential report to Congress immediately as he redacts grand jury testimony and other elements.

Democrats say they may subpoena the report if it's not forthcoming by their Tuesday deadline, which Barr has said will not be met.

RELATED: Trump: Those behind Russia probe will 'be held accountable'

Through the day, tempers were rising on Capitol Hill.

"Mr. Attorney General," she said, "show us the report and we'll come to our own conclusions." She asked what Trump and the Republicans were afraid of and mocked them as "scaredy-cats."

Trump himself headed to Grand Rapids, Michigan, for a campaign rally, where he deemed the probe "the greatest hoax in the history of our country" and warned that those behind it "would be held accountable."

"After three years of lies and smears and slander, the Russia hoax is dead," Trump told a packed house of roaring supporters. "This was nothing more than a sinister effort to undermine our historic election victory and to sabotage the will of the American people."

The length of Mueller's still-confidential report makes clear that there are substantially more details that he and his team have documented in their investigation than Barr disclosed to Congress and the public. The volume of pages was described Thursday by a Justice Department official and another person familiar with the document.

The Justice Department official said Barr discussed the length of the report during a phone call Wednesday with Nadler, who would only indicate it was less than 1,000 pages.

Both the department official and the other person spoke on condition of anonymity to discuss the document.

Barr would not commit to providing the full report with its underlying evidence, according to a House Democratic aide granted anonymity Thursday to brief reporters.

The attorney general has been going through the report amid Democratic concerns that what has been made public so far was tilted in Trump's favor. It's unclear whether whatever Barr might release next will be Mueller's own words or another summary. Nadler offered to join Barr to seek a judge's approval to unseal grand jury testimony, the aide said.

Barr has said he'll provide Congress with at least a partial version in April and told Nadler he would agree to testify before his committee.

As that battle brews, House Democrats barreled ahead with their own investigation of the Trump administration, and Trump resumed his attack on Rep. Adam Schiff, D-Calif., just as the chairman of the intelligence committee was about to gavel his panel into session.

Republicans picking up on Trump's complaints formalized their demand that Schiff resign as chairman of the intelligence panel over his comments that there was significant evidence the president and his associates conspired with Russia.

"We have no faith in your ability to discharge your responsibilities" in line with the Constitution, the Republicans wrote to Schiff in a missive they read aloud at the hearing.

Credit: AP
Rep. Devin Nunes, R-Calif, ranking member of the House Intelligence Committee, left, and Chairman Adam Schiff, D-Calif., right, listen to witnesses as the Democrat-controlled panel pushed ahead with their oversight of the Trump administration at a hearing to examine to examine "Putin's Playbook," how the Russian government works to undermine its adversaries, especially the U.S., on Capitol Hill in Washington, Thursday, March 28, 2019. (AP Photo/J. Scott Applewhite)

Schiff stood by his remarks, listing the meetings that people in Trump's circle had with Russians. He noted Trump's pursuit of a deal to build a Trump Tower in Moscow.

"There is a different word for that than collusion, and it's called compromise," Schiff said, as he opened the session. The hearing was called to provide an overview on how Russia in the past has blackmailed Americans.

Since Barr's findings were released, Schiff this week has repeated his assertion that evidence of collusion is in "plain sight." He says Mueller's failure to find a criminal conspiracy with Russia does not absolve the Trump campaign.

Pelosi stood by Schiff, saying she was proud of him and taunting Republicans — including Trump — for fearing the chairman, whom she called a "patriotic leader."

"What is the president afraid of, Is he afraid of the truth?" she said. "They're just scaredy-cats."

Democrats complain that Barr overstepped by making the determination, with Deputy Attorney General Rod Rosenstein, that Trump did not obstruct the investigation.

While Barr's summary Sunday said Mueller did not find that the Trump campaign "conspired or coordinated" with the Russian government to influence the 2016 presidential election, it also said Mueller reached no conclusion on whether Trump obstructed the federal investigation, instead setting out "evidence on both sides" of the question.

"I would hope the attorney general would not be acting as a political operative for the president," said Rep. Jamie Raskin, D-Md., a member of the Judiciary Committee. "The Department of Justice should not be involved in a cover-up of what's actually in the report."

Rep. Elijah Cummings, D-Md., chairman of the House Oversight Committee, said Wednesday he was disappointed Barr would take weeks, not days, to release the report.

"The president has now an opportunity for weeks, it sounds like, to do these victory laps," said Cummings, noting that Trump's lawyer, Michael Cohen, is among those headed to jail as a result of the probe. "Cohen goes to jail, the president runs a victory lap."

Barr told the chairman of the Senate Judiciary Committee, Sen. Lindsey Graham, R-S.C., that he's combing through Mueller's report and removing classified, grand jury and other information in hopes of releasing the rest to Congress.