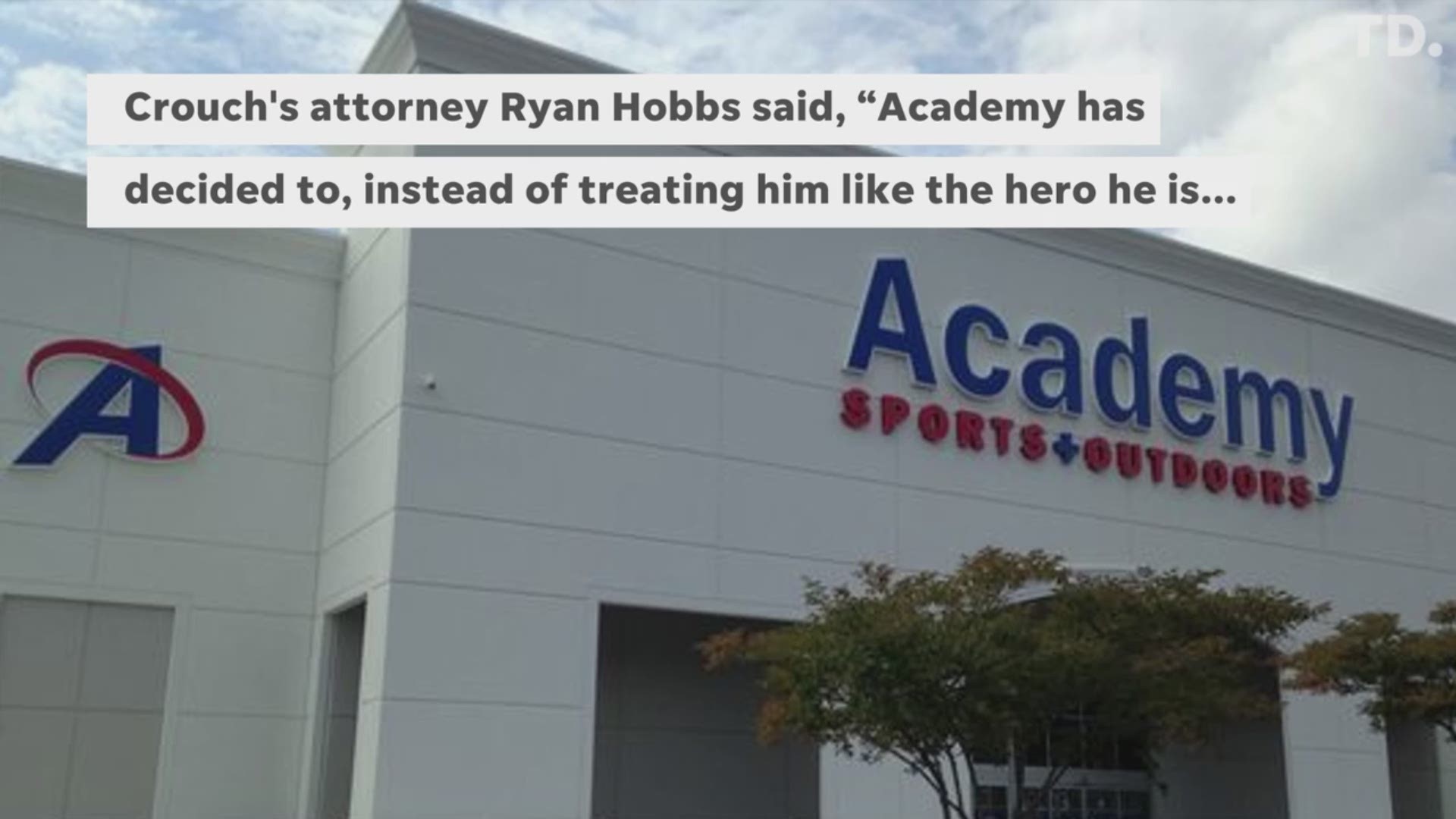 Credit: Special to the Democrat
Dean Crouch and his family. Crouch was fired from his position as a store manager of the Tallahassee Academy Sports after tackling a suspect who is accused of trying to run out of the store with a handgun.

The manager of Tallahassee’s Academy Sports was fired Tuesday after tackling a suspect accused of stealing a handgun last week. The suspect also allegedly threatened to shoot people.

Dean Crouch, 32, was the store manager who stopped Jason White from leaving the Mahan Drive store with a .40-caliber pistol from the firearms counter on June 29.

“Academy has decided to, instead of treating him like the hero he is, they terminated his employment effective immediately because he put his hands on Mr. White,” Crouch's attorney Ryan Hobbs said.

Just hours before he was taken into custody, White stole two handguns from Cash America Pawn on South Adams Street, according to Tallahassee Police.

White asked to look at the handgun at the firearms counter. He was handed the gun, then ran toward the front door.

Crouch, who court records say observed the transaction at the counter, and another employee tackled and subdued White at the exit doors and recovered the gun, a stolen backpack, five boxes of ammunition and two magazines for the Glock.

White was taken into the store’s office while police were en route.

It was there that he admitted to stealing the gun and threatened to shoot people with it. Court records indicate those threats, but do not mention threats to kill police officers as Crouch’s attorney claims.

White, according to court records, said he and his family were being threatened by an unknown person and he wanted the gun to “kill him."

“He repeatedly said ‘I stole and I admit to it’ and ‘I will steal again when I get out of jail,’” officers wrote in their report.

More: Police: Cancer patient was killed for her painkillers

Hobbs said his client is considering a lawsuit for wrongful termination. The way he sees it, Crouch may have saved lives by stopping White.

“This is not something that happens for Mr. Crouch in his everyday life,” Hobbs said. “I think he was thinking there is a man running out of the store with a gun in his hand with his coworkers following from the firearm area screaming ‘Stop that man.’ Something had to be done and he was the one that was going to do it.”

Credit: David Thomas/The Jackson Sun
This is a file photo of an Academy Sports + Outdoors store.

Academy Sports spokeswoman Elise Hasbrook said she could not comment on specific personnel matters or policies.

However, Crouch’s actions and his termination were handled in accordance with the Texas-based company’s policies.

More: Cops advise man to break into home; woman inside house responds with a gun

“While the incident ended without injury, actions inconsistent with corporate policies were taken,” she said. “We addressed the matter with the local store and individuals involved.”

Crouch worked at the store for more than two years and is now married with a family and has no way to support them.

Hobbs said maybe the corporate policy should be revisited.

“My instincts tell me they are concerned more about people like Mr. White suing them for being stopped in the course of a theft than they are about rewarding or acknowledging in a positive manner that Mr. Crouch may have saved lives.”