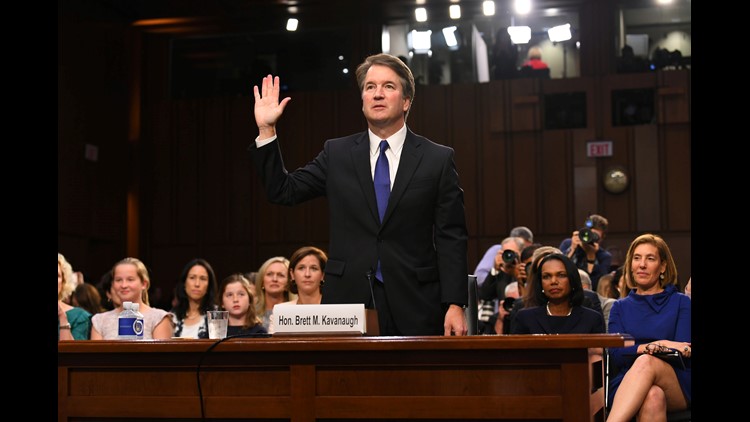 Photo by: USA TODAY
Supreme Court nominee Brett Kavanaugh may be back before the Senate Judiciary Committee next Monday.

WASHINGTON – Senate Republicans are pushing forward with plans for a showdown Monday between Supreme Court nominee Brett Kavanaugh and a woman who accused him of sexual assault in high school, but Democrats want more time and testimony.

Senate Judiciary Committee Chairman Chuck Grassley said Tuesday his staff has reached out to Christine Blasey Ford by email "three or four times" to map out plans for a public hearing next Monday without receiving a response.

"It kind of raises the question, do they want to come to the public hearing or not?” Grassley said. “We wouldn’t be having this hearing if it wasn’t for the fact that Dr. Ford told the Washington Post and other people publicly that she wanted to testify.”

Debra Katz, the lawyer representing Ford, told CNN Monday her client is willing to testify. She could not be reached for comment Tuesday morning.

Kavanaugh, 53, a federal appeals court judge chosen by President Donald Trump to succeed retired Justice Anthony Kennedy, has agreed to appear again following a four-day hearing earlier this month. He has denied the California college professor's accusation that he assaulted her at a party in the Maryland suburbs of Washington, D.C., when he was 17 and she was 15.

President Donald Trump said Tuesday he would continue to back Kavanaugh, and he does not think an FBI investigation of allegations against him is necessary before the hearing.

He added: “Judge Kavanaugh is anxious to do this”

The looming showdown is reminiscent of Anita Hill's accusation in 1991 that Clarence Thomas – a Supreme Court nominee then serving on the same federal appeals court – sexually harassed her in the workplace when he was in his 30s. The two appeared before a special Judiciary Committee hearing, told their separate stories, and Thomas ultimately was confirmed, 52-48.

Democrats decried Republicans' plans to push ahead with the hearing without seeking a full FBI investigation. Senate Minority Leader Chuck Schumer, D-New York, also said more witnesses should be allowed to testify, including Mark Judge, a friend of Kavanaugh's at the time who Ford said was in the room when the alleged assault happened.

"There must be an agreement on witnesses, and the FBI should be given time to reopen its background check investigation into Judge Kavanaugh," Schumer said. "That way, senators will have the necessary information and expert analysis at their disposal at the hearing, making it much less likely that it will evolve into a 'he said-she said' affair."

Sen. Dianne Feinstein, the top Democrat on the Judiciary Committee who was first informed of Ford's accusation in July when the woman requested anonymity, denounced Republicans' efforts to limit the hearing to two witnesses.

"Compare that to the 22 witnesses at the 1991 Anita Hill hearing and it’s impossible to take this process seriously," Feinstein said. “What about other witnesses like Kavanaugh’s friend Mark Judge? What about individuals who were previously told about this incident? What about experts who can speak to the effects of this kind of trauma on a victim?

"This is another attempt by Republicans to rush this nomination and not fully vet Judge Kavanaugh.”

All 10 Democrats on the Senate Judiciary Committee urged FBI Director Chris Wray and White House Counsel Don McGahn on Tuesday to reopen Kavanaugh’s background investigation and provide a complete report before the hearing.

But the Department of Justice, referring back to a statement released Monday, says the FBI fulfilled its role by forwarding a letter to the White House Counsel’s Office.

“The allegation does not involve any potential federal crime,” a Justice Department spokesman said in a statement. “The FBI’s role in such matters is to provide information for the use of the decision makers.”

Trump told reporters, “I don’t think the FBI should be involved because they don’t want to be involved, if they wanted to be I would certainly do that. As you say, this is not really their thing. The Senators will do a good job."

Democratic committee members say their request to the FBI is not for a criminal investigation, but “appropriate follow-up” to the FBI’s background investigation. In their letter to Wray and McGahn, they ask the FBI to interview Kavanaugh, Ford and other relevant witnesses. They say the White House counsel directed the FBI to investigate when Hill accused Thomas of sexual harassment.

“This nomination should not be treated differently simply because of an artificial deadline to rush the confirmation process,” the letter states.