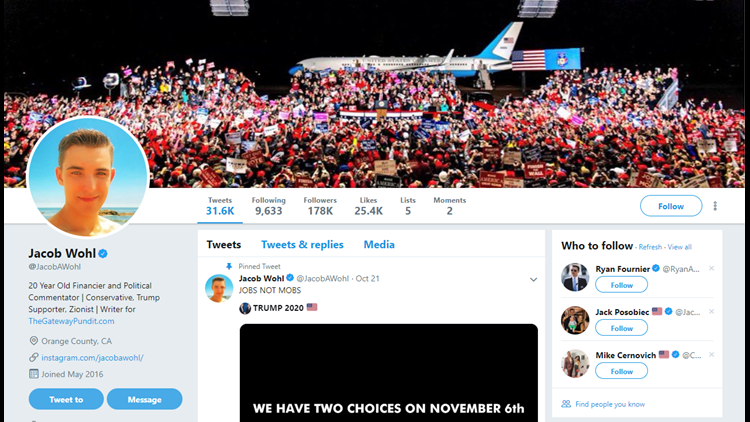 Photo by: Via Twitter
Jacob Wohl, a 20-year-old pro-Trump Twitter personality, misled Arizona investors from 2015-2016 in an attempt to defraud them, according to a cease and desist order filed by the Arizona Corporation Commission last year.

Jacob Wohl, a 20-year-old pro-Trump Twitter personality whose recent efforts to smear Special Counsel Robert Mueller appear to have been exposed as a hoax, was accused by Arizona authorities of defrauding investors in 2015 and 2016.

A 2017 Arizona Corporation Commission cease-and-desist order leveled the allegations against Wohl, finding he violated securities law by misleading investors about how much of their money would be at risk, and misrepresenting his company's size. The commission ordered him to pay $32,919 in restitution and penalties totaling $5,000.

Wohl's attorney told the commission in 2017 that he was unable to make the first payment and asked for a four-week continuance.

"I'm wondering why we're going through this exercise, and why you think your client is going to make payment on a later date if he's not able to make payment today," Commissioner Boyd Dunn said.

"This is a relatively small amount," Wohl's attorney said. "I know you guys have seen hundreds of thousands of dollars for these types of cases."

Dunn replied, "It's not a small amount to the investor. So don't belittle it."

The commission voted to give Wohl a four-week continuance, with the remaining balance to be paid in monthly installments of $1,371.61 beginning Dec. 1, 2017.

Wohl has not paid any of the money he owes the commission, according to a commission spokeswoman. The commission has referred the matter to the Attorney General’s Office collections unit.

Neither Wohl nor his attorney immediately responded to a request for comment.

Was Jacob Wohl trying to discredit the special counsel?

Wohl became the focus of a social media firestorm this week when the liberal-leaning political website Hill Reporter accused him of being behind false claims of sexual assault against Mueller, who is investigating possible collusion between the Trump campaign and Russia.

NBC News reported that multiple reporters had been contacted by a woman who said she had been offered money to say Mueller had harassed her.

Wohl denied involvement in any scheme to pay women to make false allegations against Mueller.

NBC, however, discovered Wohl's email in the internet-domain records for a private company that was investigating the accusations against Mueller, Surefire Intelligence.

Also, phone calls to a number listed on the Surefire Intelligence website went to a voicemail belonging to Wohl's mother, NBC reported.

PUBLIC STATEMENT IN RESPONSE TO A FLURRY OF PRESS INQUIRIES: Surefire Intelligence does not comment on current, past or future operations, nor
the lack thereof. Our firm assists businesses and individuals with complex and sensitive matters, many of which are (1/2)

Wohl, who lives in Southern California, was already a controversial figure on social media.

He has been the subject of a viral Twitter meme mocking Wohl's repeated claims of visiting "hipster coffee shops" around Los Angeles and overhearing conversations in which anonymous customers are discussing their support of Trump or opposition to his enemies.

I just left a hipster coffee shop in downtown LA. There was a group of young Democrats murmuring to each other that they know the "Suspicious Packages" were an inside job to make Republicans look bad

I just left a hipster coffee shop in the Fairfax District, here in Los Angeles. I can tell you one thing: Jewish support for President Trump is higher than ever!

I just a left a hipster coffee shop. It was packed with liberals, whispering amongst each other about what a commendable job President Trump did with Vladimir Putin this morning in Helsinki — America is PROUD! 🇺🇸

I was in a hipster coffee shop (safe space) here in LA and the libs were whispering to each other how @realDonaldTrump is doing great for the economy, got them a raise at work and will definitely be re-elected in 2020

Wohl's troubles in Arizona began in 2015, when two residents of the state contacted Wohl after seeing his media appearances.

The Arizona residents invested in his hedge fund, according to the Corporation Commission.

The commission found Wohl won the business of at least one of his investors by misrepresenting his company's size.

The investor was also told that only 20 percent of invested capital would be at risk. However, in January 2016, Wohl ceased operations and returned approximately 60 percent of the investors' capital, the commission said.

In 2015, Wohl began looking for investors for a new hedge fund, NeX Capital Management LLC. Wohl solicited investments in the fund from two Arizonans by misrepresenting the risk involved, the commission found.

While the Arizona investors entered written agreements with NeX, both terminated the investment process before NeX engaged in trading on their behalf.

Wohl also began posting advertisements on Craigslist Phoenix in 2016, looking for investors in a house-flipping business. The commission documents say the Craigslist advertisements misrepresented the size of Wohl's company, Montgomery Assets Inc., and the experience of its employees and risk associated with the investment. No Arizona residents invested in Montgomery Assets.

In June, Wohl tweeted calling the Arizona Corporation Commission a "racketeering organization full of Angry Democrats," citing an article detailing allegations that Corporation Commission head Gary Pierce, who is a Republican, was accepting money in exchange for favorable votes affecting a utilities company. When Pierce was tried on those allegations, jurors deadlocked and the judge declared a mistrial.

The Arizona Corporation Commission turned out to be a racketeering organization full of Angry Democrats!