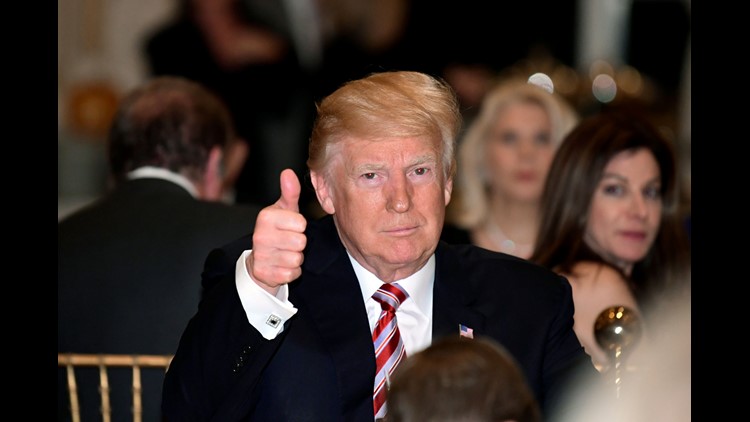 Photo by: Susan Walsh, AP
President Donald Trump gives a thumbs-up as he has Thanksgiving Day dinner at his Mar-a-Lago estate in Palm Beach, Florida.

President Donald Trump was saved from the looming dangers of romaine lettuce on Thanksgiving Day.

Even though the president's Thanksgiving menu with family included a full salad bar with Caesar, wedge and Greek salads, the White House told USA TODAY that no romaine lettuce was served.

This followed a food safety alert issued by the Centers for Disease Control and Prevention two days before Thanksgiving, telling people to trash any romaine lettuce they've bought and avoid eating it until they know more about romaine linked to more than 30 cases of E. coli poisoning.

President Donald Trump gives a thumbs-up as he has Thanksgiving Day dinner at his Mar-a-Lago estate in Palm Beach, Florida.
Susan Walsh, AP

Caesar salad is typically made with romaine lettuce. It's unclear what lettuce was used as a substitute at Trump's family dinner at his Mar-a-Lago resort in Palm Beach, Florida.

More: Romaine lettuce: Why it's hard to keep it safe from E. coli and other bacteria

"New romaine from different growing regions, including Florida and Arizona, will soon be harvested," he wrote on Twitter. "We’re working with growers and distributors on labeling produce for location and harvest date and possibly other ways of informing consumers that the product is 'post-purge'"