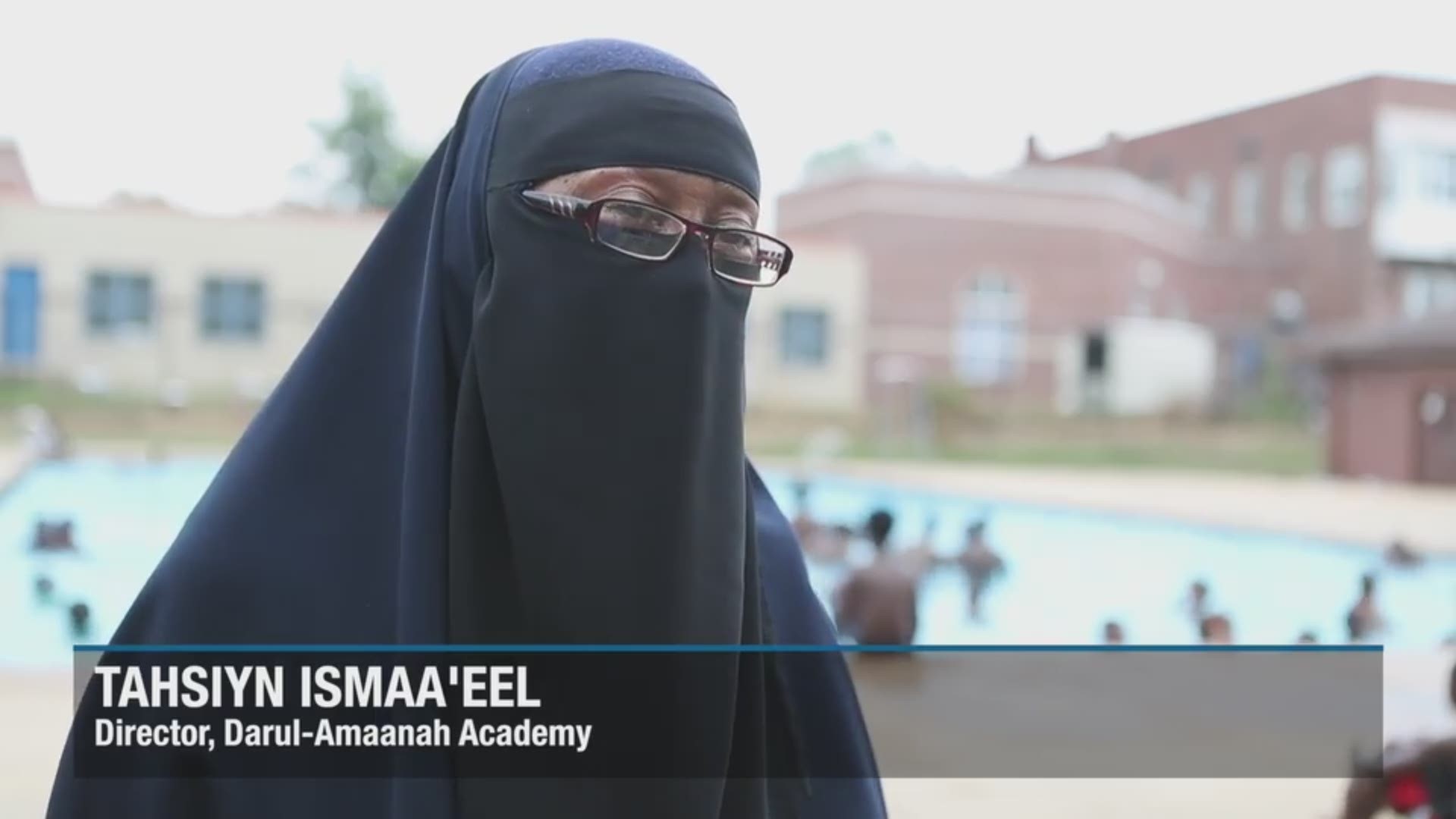 WILMINGTON, Delaware — It's the fourth year Tahsiyn A. Ismaa’eel has taken children, participants in her summer Arabic enrichment program, to Wilmington's Foster Brown public pool. But this year marked the first time some of her elementary schoolers were asked to leave the pool, Ismaa’eel said — supposedly because they were wearing cotton shirts; shorts; and hijabs, or headscarves.

The pool manager said it's against city policy to wear cotton in public pools, according to Ismaa’eel. If it's a rule, Ismaa’eel said, "it's never been enforced." To pick on her group is discrimination, she said.

"There’s nothing posted that says you can’t swim in cotton," said Ismaa’eel, owner and principal of the Darul-Amaanah Academy and director of its summer program. "At the same time, there are other kids with cotton on. … I asked, 'Why are my kids being treated differently?'"

Ismaa’eel, who wears a hijab with a niqab covering her face, said she told the manager she would relay the message to the program parents. But that didn't resolve the issue.

"She (later) had a police officer come over and ask what time we were leaving," Ismaa’eel said.

A city officer often sits in a patrol car outside the pool, she noted, but it's unusual for officers to enter the facility.

"She said there are people waiting to get in and waiting for you to leave," Ismaa’eel said of the officer.

She thought it was strange her children would be asked to leave when she said there was another camp that had been at the pool longer.

"No one is bothering them," she said. "We were approached first about the cotton, and then it became, 'Oh, the pool is over capacity so you need to leave.' ... I felt very unwanted."

Mayor Mike Purzycki's office declined to be interviewed about the incident. In an emailed statement, John Rago, the mayor's deputy chief of staff for policy and communication, said the supposed cotton ban is a safety issue.

"There are city rules and regulations designed to ensure the safety of those who use the pools," he said. "One of the rules requires that all swimmers wear proper swimming attire."

But what "proper attire" means is unclear. The city's posted rules do not define proper swimming attire except to disallow "cut-off jeans." Rago pointed to language from the state, but Delaware's only regulation regarding swimwear at public pools is that bathing suits are "recommended."

Neither set of rules makes any mention of cotton.

"Among the safety considerations is the fact that cotton becomes heavy when wet and weighs swimmers down," Rago said in his statement. "Cotton also strains the pool filtration system more than proper swimwear."

For Naveed Baqir, the story is disappointing but nothing new. The executive director of the Delaware Council on Global and Muslim Affairs said Muslims have long encountered problems at public pools — so often, in fact, that many who can afford it buy memberships at private pools known to be Muslim-friendly.

"Long ago, we just gave up on the public pools," said Baqir, who said he was asked to leave a facility years ago after he tried to swim with his legs covered. "For my own children, I’d rather pay the money and be treated like everyone else rather than putting myself in an anxiety situation."

Credit: JENNIFER CORBETT/THE NEWS JOURNAL
Naveed Baqir is the executive director of the Delaware Council on Global and Muslim Affairs.

"The solution we’ve come up with is OK, even though we pay taxes. We contribute in terms of our civic responsibility; we’re just not going to use it because it's not worth the headache," he said of public pools.

There is "absolutely no doubt" Ismaa'eel's camp was a target of selective enforcement, Baqir said.

"I’m surprised this happened in the city of Wilmington that is supposed to be more progressive and accepting," he said. "It's difficult to walk away from these situations when they happen in places you feel you belong. What message are you giving to these kids? That they don’t belong?" 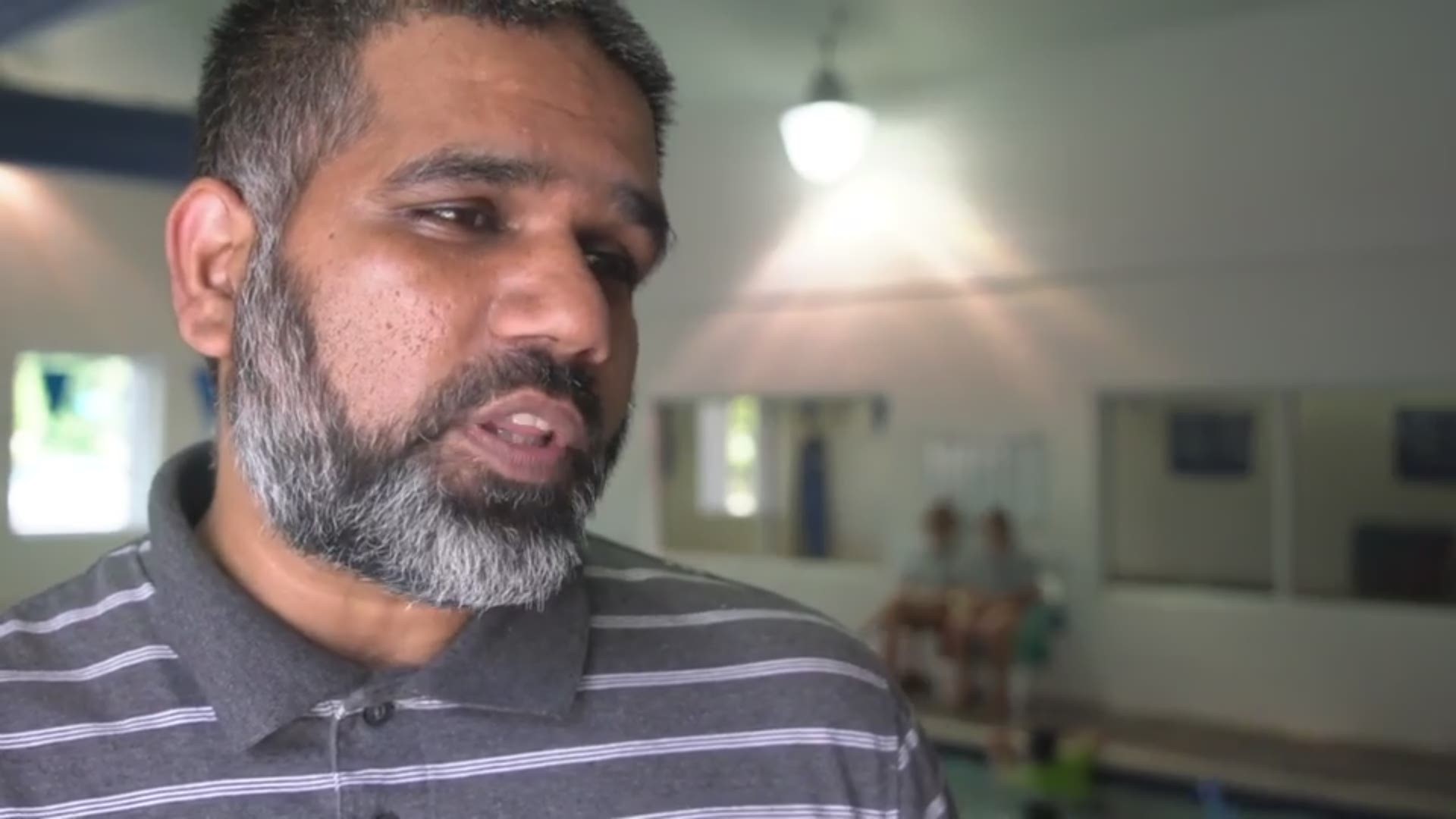 "It's discrimination any way you look at it," she said. "I witnessed other kids dressed the same way. ... My daughter sat there and cried that day because they had to get out of the pool."

The city is revising its pool signage to "more clearly communicate pool swimwear regulations," Rago said. It will state: "Swimmers must wear proper swimwear (swimwear composed of Nylon, Lycra, Spandex, and Polyester is permitted, but cotton and wool clothes are not permitted.)"

"The city will also retrain pool staff so they are prepared to explain to the public the reason for the swimwear limitations," Rago said. "We apologize for any miscommunication with the family, but their safety was the focus of the city’s concern.”

"We are not going to go beyond the statement for the moment," Rago said.

Since that first incident on June 25, Ismaa’eel said she was "harassed" on two other occasions by the pool manager about her program participants wearing cotton. On July 6, Parks Director Kevin Kelley Sr. responded to an email from Ismaa'eel saying he explained to the pool director "the importance of acting in a professional manner."

Until the new signs are installed, he added, her participants will be allowed to swim as they are.

"I can provide some more time for the children (to) obtain the proper clothing but they need to wear something other than cotton into the pool," he wrote on Monday in an email obtained by The (Wilmington, Delaware) News Journal.

The program director said she's made an effort to inform parents of the apparent rule, but many of them live below the poverty line and cannot afford new swimwear, especially pool-friendly religious garments that she described as expensive.

"Kids wear what they have," she said, adding that she wore cotton when she swam at Prices Run pool as a child. "To me, it was heartbreaking to have kids taken out of the pool. ... They were completely confused."

If cotton is truly an issue, Ismaa’eel said her camp will find a way to work with it. But she said policies should be implemented citywide and be posted.

"You don't just spring it on them," she said. "Make people aware and don’t treat them like this. ... (Children) don't know about the adults' politics or policies. Kids want to have fun."