Kentucky teachers shut down schools in protest over pension bill. Here's what we know 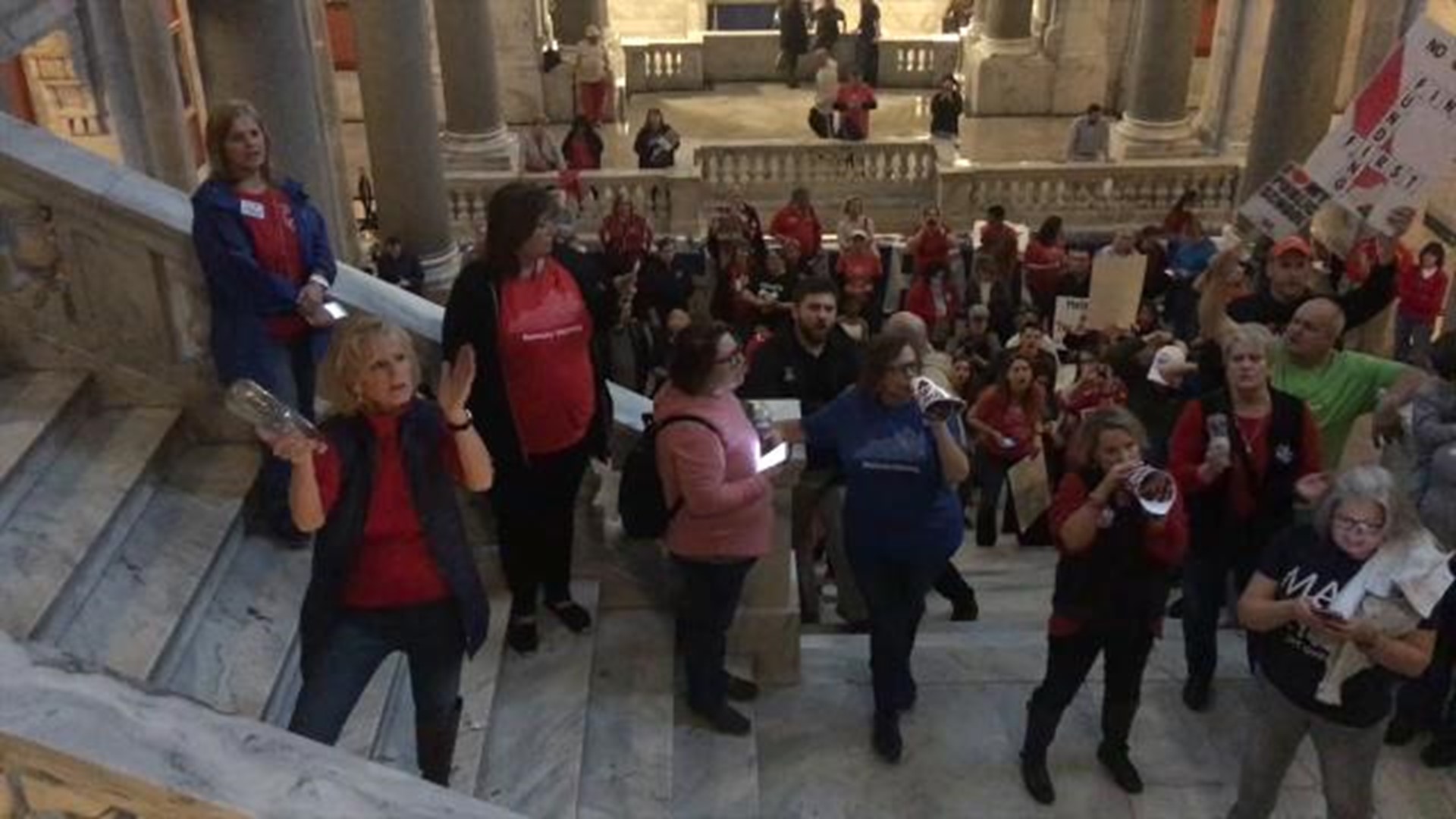 Credit: Timothy D. Easley, AP Photo
Dusti Moore, a teacher in the Bath Co. Ky. school system shouts at the Kentucky Senate chamber in protest of Kentucky Senate Bill 1, a bill that proposes changes to the state funded pension system for teachers, March 9, 2018, in Frankfort, Ky. Thursday Republicans in control of the Kentucky House and Senate unveiled - and zipped through to final passage - a new version of the controversial pension reform bill.

LOUISVILLE, Ky. — A wave of school closures have swept Kentucky as teachers across the state, frustrated by a controversial pension reform bill passed Thursday night, requested substitutes or called in sick.

Republicans in control of the Kentucky House and Senate unveiled — and zipped through to final passage — a new version of a controversial pension reform bill that does not include any reduction in annual cost-of-living increases for retired teachers. And it will not change how long current teachers must work before being eligible for full retirement benefits.

Jefferson County Schools closed Friday due to significant teacher absences that left it unable to "safely cover a large number of classes with substitute teachers," according to a statement.

The district is not alone. At least 20 counties have announced school closures — many citing an inability to cover teacher absences — as teachers and supporters rally behind the hashtag #120Strong on Twitter, calling for all 120 counties to close their doors.

Some, like Madison County, have explicitly connected the closures to protests following the pension reform bill's passage, while others have attributed it simply to employee absences.

"This has been a difficult evening for all for all of us in education. We share a passion for our students and for their futures that is unmatched and unwavering," a post on Madison County's school district's website said. "Tonight we have to balance that passion with the need to stand in solidarity with others in our profession across this state."

Why are teachers angry? 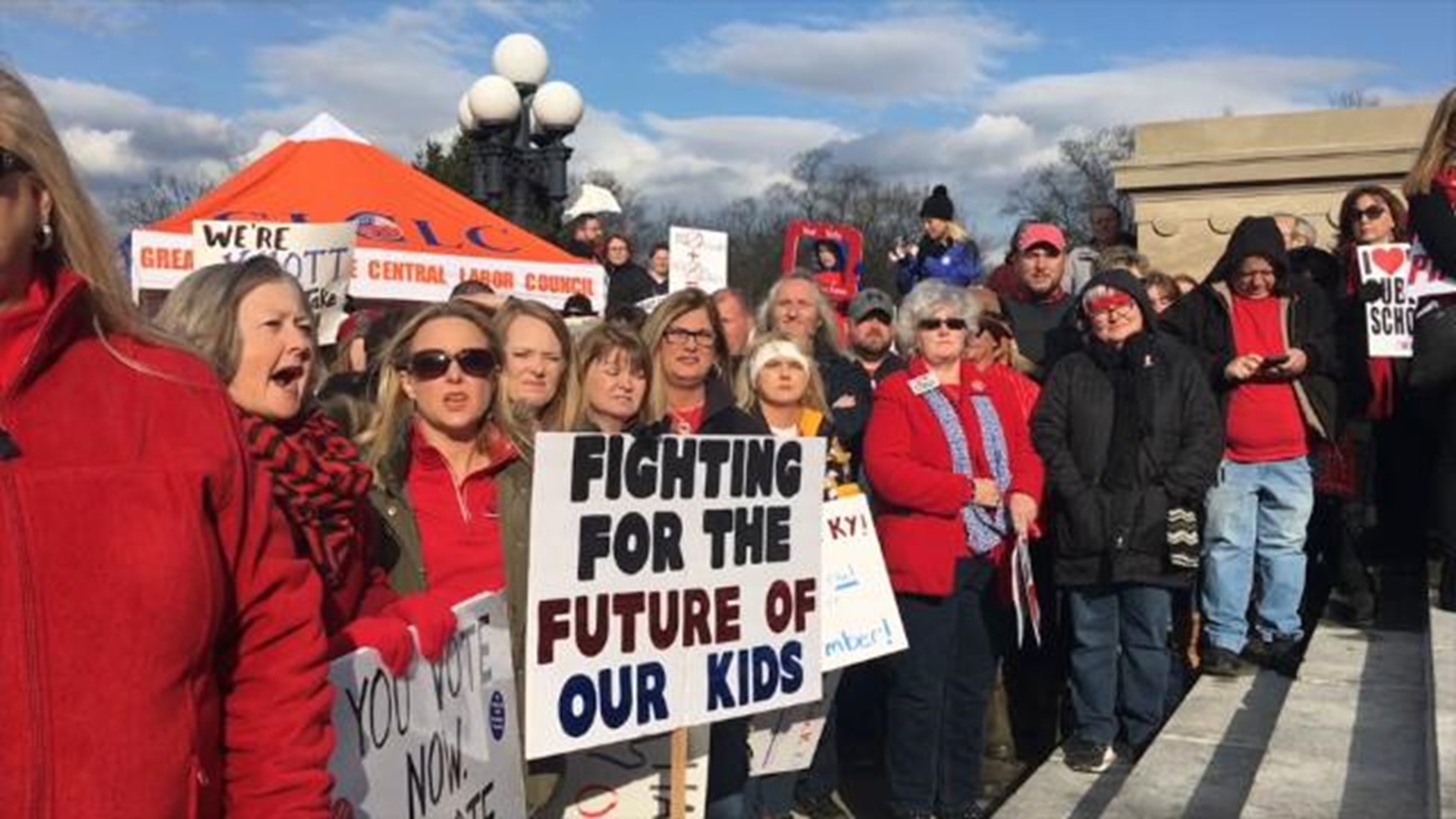 Teachers have been a consistent, loud voice against the state's attempt to fix its broken pension system, clashing with the governor and lawmakers who support the GOP plan.

Earlier this month, they protested loudly before a key pension reform vote was delayed and hundreds of teachers and public workers have gathered in Frankfort for rallies against the proposals.

A banner posted on the front steps of one rally summed up their feelings: "WE'VE HAD ENOUGH."

Thursday night, as the pension bill passed, many continued to voice their outrage, stunned and furious by lawmakers' quick unveiling and voting on the measure. They chanted objections throughout, like "Shame on you."

Who is organizing this?

Teachers and others rally big against pension bill in Frankfort

1 / 11
James Crisp/Special to Courier Journal
Adrielle Camuel from Fayette County listens to a speaker during "The People's Movement- United We Stand Rally" held on the Capitol steps in Frankfort, Monday, March 12.

The Jefferson County teachers union is encouraging teachers to go to the state capitol on Monday to advocate for education funding in the budget, but the union did not recommend for teachers to call off work Friday, according to a Facebook post.

"JCTA is NOT recommending a job action, such as some are promoting on social media," said a post on the Jefferson County Teacher's Association Facebook page.

Under Kentucky law, public employees do not have the right to strike.

The Jefferson County union is one of more than 170 local affiliates of the statewide union and typically focuses on local issues. A statewide strike would require a majority of the state union's board to vote in favor of one.

The last time Kentucky teachers embarked on a statewide strike was in 1970. That strike, triggered in part by pay grievances, involved an estimated 25,000 employees. It lasted five days.

In the end, the General Assembly gave in to each of the teachers' demands, including a $600 pay raise.