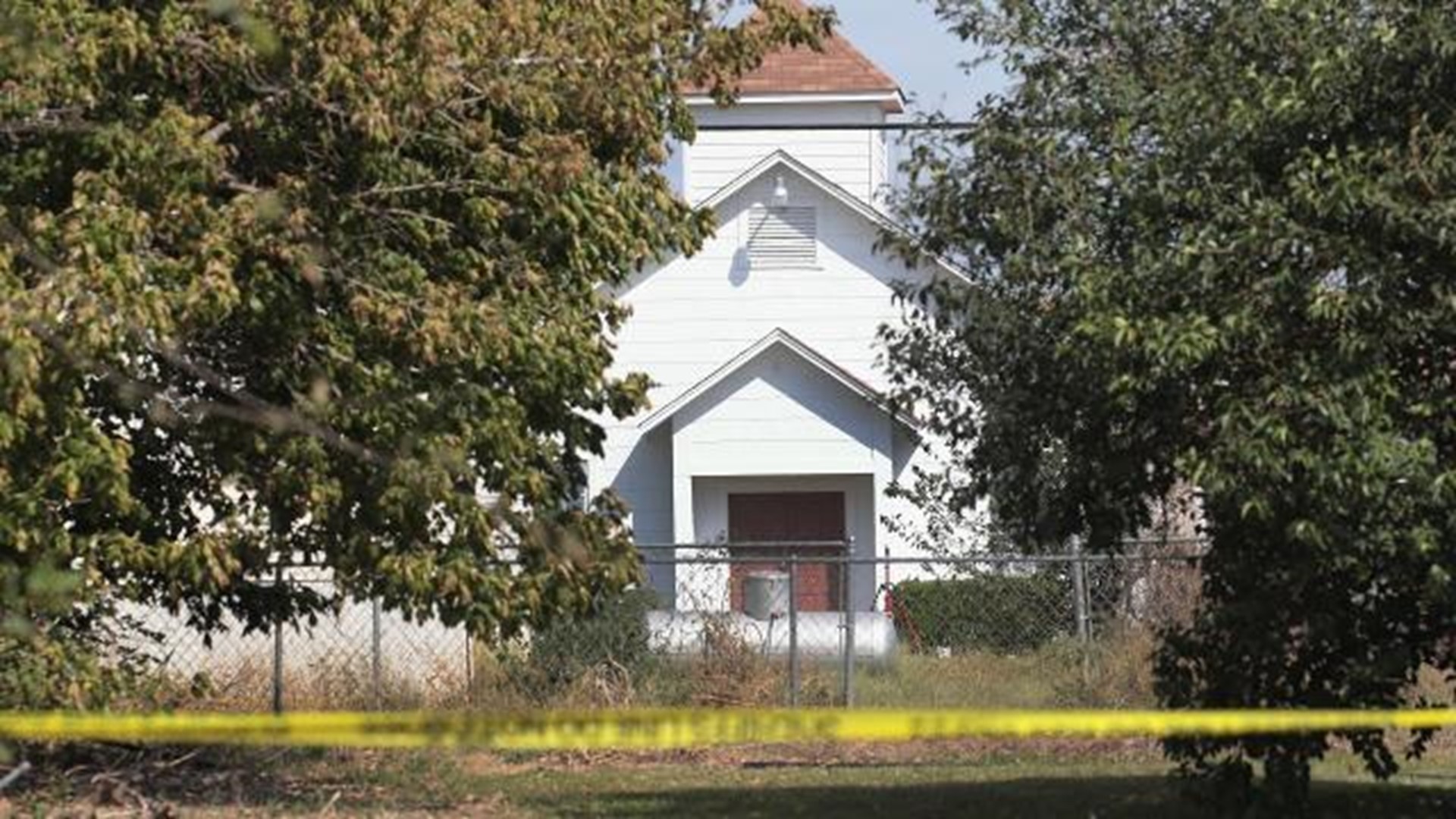 Credit: Courtney Sacco/Caller-Times
Members walk inside the First Baptist Church of Sutherland Springs to visit the memorial inside on Sunday, Nov. 12, 2017. On Nov. 5, 2017, one week earlier, 25 people and an unborn child were killed in a shooting at the church.

CORPUS CHRISTI, Texas — A family that lost nine members killed in the Nov. 5 massacre at a church Sutherland Springs is suing the federal government for "institutional failures and the negligent or wrongful acts" that allowed the gunman to purchase weapons.

Joe and Claryce Holcombe, whose son and eight other families members were among those killed at the First Baptist Church, are each seeking $25 million in damages.

The Sutherland Springs death toll was 25, plus an unborn child. It was the deadliest mass shooting at a church in American history.

The Holcombes' lawsuit filed Thursday in the federal court in San Antonio says the Air Force should have flagged shooter Devin Patrick Kelley's history of domestic violence. That would have prevented his gun purchases, the suit says.

"Under a 1996 law preventing spouse and child abusers from possessing firearms, the service’s Office of Special Investigations should have entered that conviction into an FBI database,” the family's lawyer, Rob Ammons, said in a news release.

More: Texas must keep guns away from those who would 'murder our children,' Gov. Greg Abbott says

"The office didn’t, the Air Force has admitted. What’s more, the acts Kelley pleaded guilty to — breaking his baby stepson’s skull and hitting and kicking his then-wife — were punishable by imprisonment of more than a year," Ammons added. "That qualifies them as felonies, which must be entered into the database.”

Kelley, who died of a self-inflicted gunshot after the attack, had served in the Air Force.

The U.S. Attorney's office said it does not comment on pending litigation.

Joe and Claryce Holcombe are the parents of John Bryan Holcombe, who went by the nickname JB and was the visiting pastor at the Sutherland Springs church on the day of the attack. He was preparing to lead the congregation in worship when Kelley opened fire.

Kelley was court-martialed and convicted of assault against his wife and stepson, the lawsuit notes. He was sentenced to a year in a military prison in San Diego and given a bad-conduct discharge in 2014.

"That conviction made it illegal for the shooter to purchase or possess a firearm and should have blocked him from ever again purchasing any gun," the suit says.

"While the shooter 'pulled the trigger,' resulting in JB Holcombe’s death, it was failures of the United States Air Force and others that allowed the shooter to purchase, own and/or possess the semiautomatic rifle, ammunition and body armor he used in the shooting spree."

Three weeks after the shooting, the Air Force said a review of its procedures found several causes for concern.

“The review also found the error in the Kelley case was not an isolated incident and similar reporting lapses occurred at other locations,” the Air Force said at the time. “Although policies and procedures requiring reporting were in place, training and compliance measures were lacking.”

Since the Sutherland Springs shooting, the Air Force has reported and corrected several dozen records since the review began and is reviewing approximately 60,000 cases involving serious offenses over the 15-year period to ensure full compliance, according to a USA TODAY report in late November.