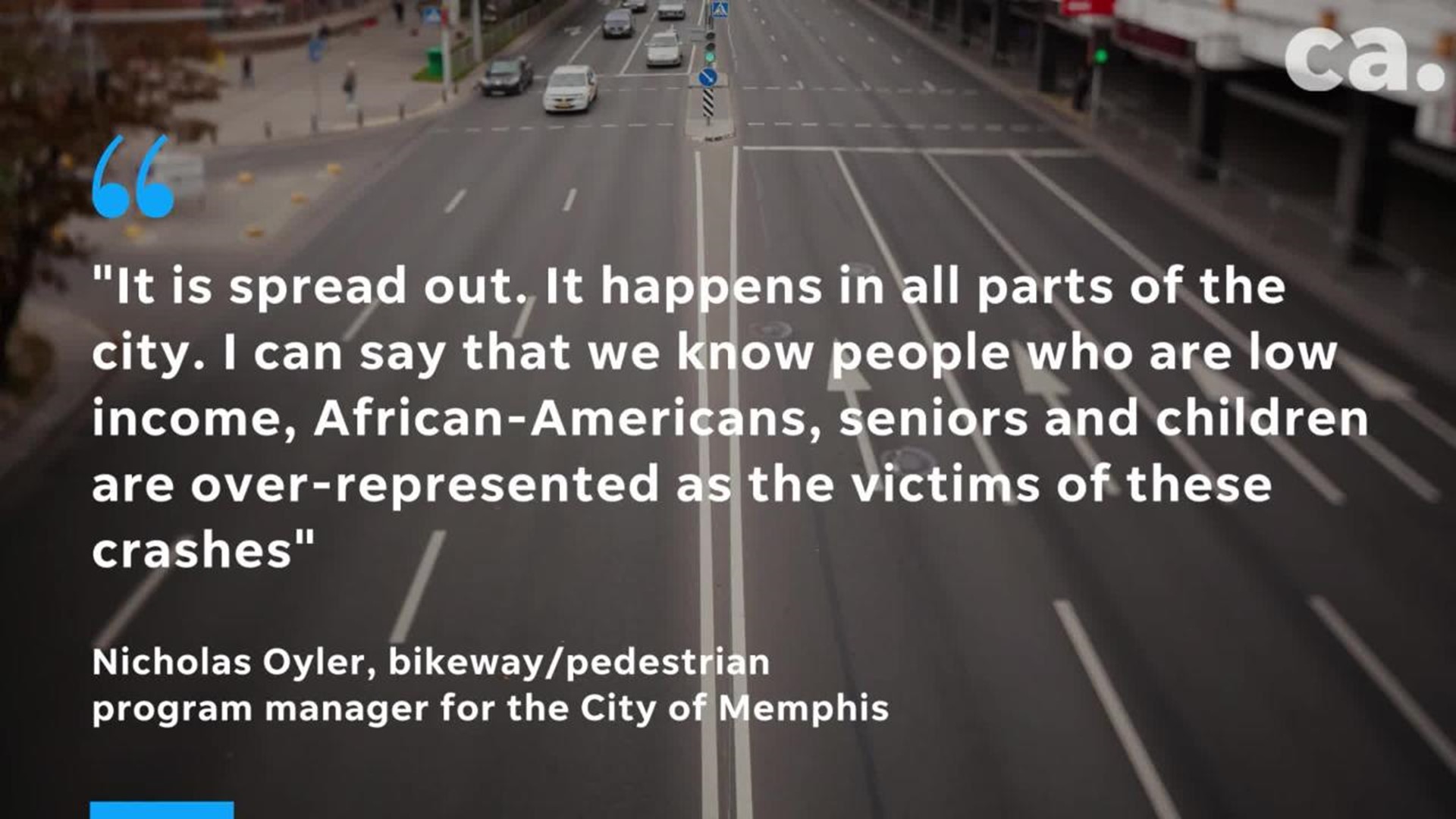 Count Paul Snyder among those who believes distraction, more than vehicles themselves, is responsible for the increase in pedestrian fatalities.

Snyder is the chair of the transportation design program at Detroit’s College for Creative Studies and has worked in vehicle design at Ford, Renault and Honda.

“I think the answer to it is really social patterns, you know, having very little to do with cars. Because cars are so expensive. You know why they’re so expensive? Because they’re safe,” Snyder said, describing various automaker directives over the years to make vehicles safer.

Snyder said some of the changes automakers have made include adding space under the hood to provide more cushion against the hard parts around the engine and lowering bumpers. Lower bumpers strike a pedestrian lower on the leg, knocking them up during a collision — though many pickups and SUVs have profiles high enough to strike average adults at chest level.

Snyder noted that many vehicles from the 1990s, sold before some of the advances he referenced were in use, remain on the roads.

So, overall, Snyder believes distraction is a more reasonable explanation for why pedestrian fatalities have risen 46 percent since 2009 while overall traffic fatalities are up only 11 percent.

Many of the expertsagree that distraction is a factor in pedestrian crashes and that combating distracted driving and walking would help reduce the number of incidents, injuries and deaths.

The proliferation of the smartphone is central to the crisis. The Governors Highway Safety Association has noted that the number of active cell phones in use in the U.S. between 2010 and 2016 increased by 236 percent.

Distracted driving, however, is extremely difficult to track because most people will not admit to doing it, and crash data on the subject is believed to be incomplete.

Reports of drivers using their phones to send and read text messages, check email or watch videos are not unusual, but all of those activities, when they happen behind the wheel, can be extremely risky.

Even touch-screen systems in many new vehicles pose problems, putting motorists at risk of crashes. A recent study funded by the AAA Foundation for Traffic Safety, conducted by researchers at the University of Utah, examined 30 vehicle infotainment systems and found that all of them are distracting to some degree.

Walkers with phones are at risk, too. Pedestrians with their eyes glued to their phones might walk into the street without checking for oncoming traffic.

Ron Van Houten, a psychology professor at Western Michigan University in Kalamazoo, however, said texting or talking by themselves are not the problem.

"The issue that’s new is the people actually taking their eyes off the road to do things," said Van Houten, who has done extensive study on traffic and pedestrian safety. He said distraction and speed are likely factors in the increase in pedestrian deaths.

Van Houten has researched how high-visibility enforcement of traffic rules for drivers affected yielding to pedestrians in Gainesville, Florida. The study results released in 2013 and a follow-up effort released last year found that enforcement has a significant impact. The follow-up also found a "statistically significant decrease" in pedestrian crashes. Van Houten is working with the City of Ann Arbor on its efforts to boost pedestrian safety.

More: Restaurants compete to have this summer's coolest and wackiest drinks

More: Starbucks did it. Is it OK to kick you out of a store?

The National Highway Traffic Safety Administration is currently examining the effect of electronic device usage on pedestrian deaths. The agency has said that no studies show “a direct link between the behavioral effects of distraction and pedestrian crash risk.” Overall, though, NHTSA says motor vehicle crashes involving distraction lead to many deaths and injuries.

“My greatest concern is when both the pedestrian and the driver don’t see each other,” said Richard Retting, director of safety for Sam Schwartz Consulting, who conducted a study on pedestrian safety for the Governors Highway Safety Association.

Susan Heck, a writer living in Tulsa, Oklahoma, said she was recently driving down a neighborhood street when a teenager using his phone “stepped out right in front of me.”

“He was doing stuff on his phone,” she said. “If I had not stopped I would have hit him. The sad thing was he looked up at me like, ‘What’s wrong with you, lady?’”

That scenario raises questions about blame. Many drivers are quick to note the many times they have seen distracted pedestrians crossing streets with their eyes on the screens in their hands. That notion even prompted Ford to launch an ad campaign for its precollision assist feature with pedestrian detection for the 2017 Ford Fusion.

The campaign used the term "petextrians" to describe people who text and walk, and included comments from a Ford engineer noting how startled he and others have been "to see how oblivious people could be of a 4,000-pound car coming toward them." The campaign elicited outrage from pedestrian advocates who equated it to blaming the victim.

Drivers have a greater share of the responsibility than pedestrians because drivers are the ones operating a dangerous piece of equipment, Van Houten said.

Society, he said, already recognizes a difference, because not everyone is able to obtain a driver's license. Anyone who is physically able, however, can be a pedestrian, and no license is needed to cross a street.

“People just need to be more careful," Van Houten said, noting that drivers do not have a right to strike people with their vehicles. "You can't unload (the responsibility) to the pedestrian. (It's) not a fair trade."