Cory Booker rallies Democrats in Virginia, where he could help the party, and vice versa 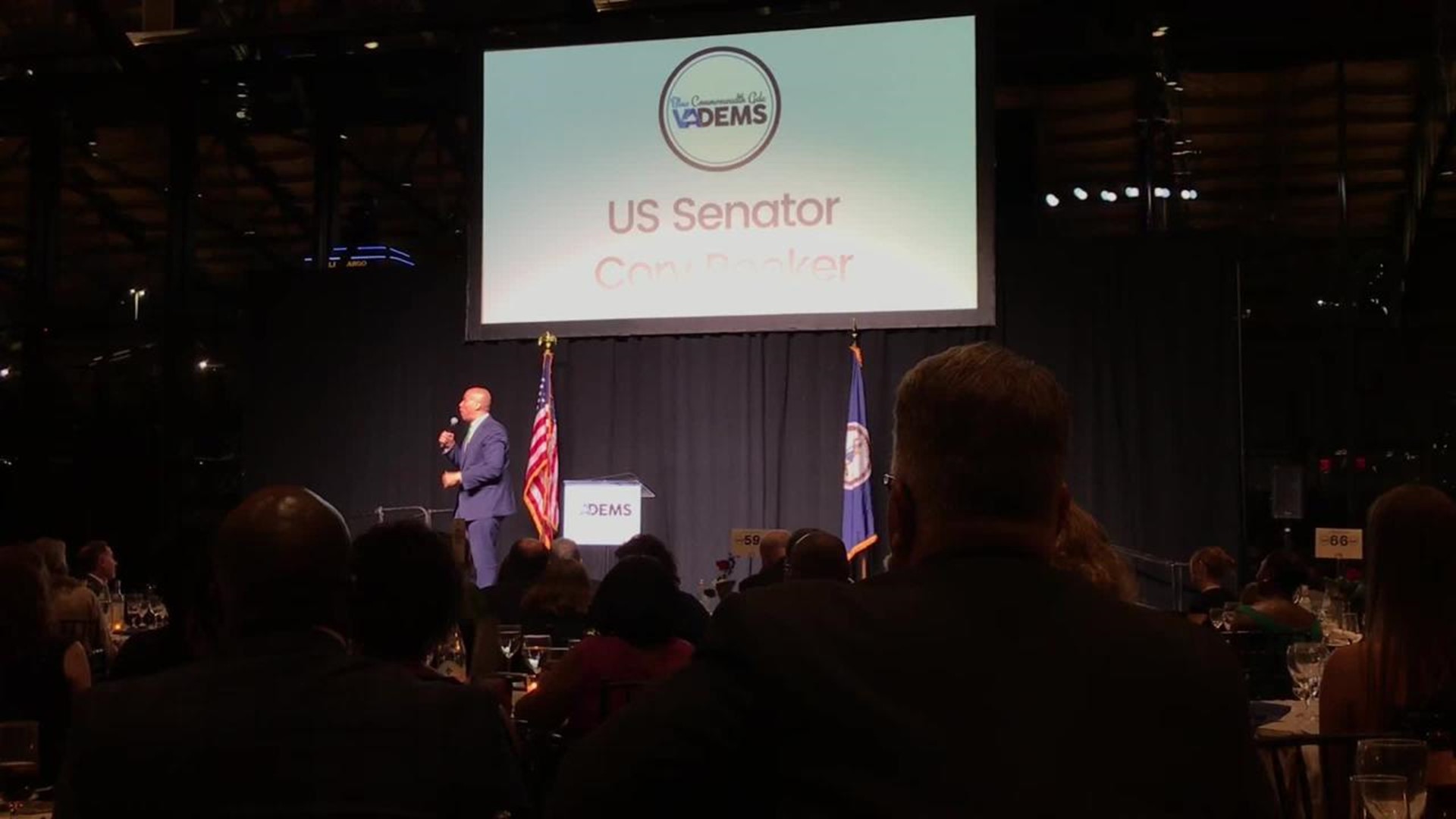 RICHMOND, Va. — Sen. Cory Booker worked to fire up Democrats on Saturday night in a state where the party made significant gains in 2017 and this year is targeting House seats in districts that were previously considered safe Republican territory.

Virginia is also a perennial swing state in presidential campaigns, one where Booker, D-N.J., would benefit from connections if he were to run in 2020.

As the keynote speaker at the Blue Commonwealth Gala, formerly known as the Jefferson Jackson Dinner, Booker mixed his personal biography, including tales of his parents breaking the race barrier to buy the home where he grew up in the Bergen County suburb of Harrington Park, with a political rhetoric that emphasized love and empathy.

"Because we see their dignity and we know this is their America. This is our America," he said, as applause grew and many in the crowd stood up.

"He's the biggest draw we've had who's not Barack Obama or Hillary Clinton," Bolling said.

Larry Sabato, director of the Center for Politics at the University of Virginia, said in an interview on Friday the dinner draws the "hard core of the hard core" of Democratic officials and activists.

“The reason why they put somebody like Cory Booker in the main speaker slot is to pique interest," Sabato said. "He’s going to be a prominent presidential candidate, everybody knows that. I don’t know if he’ll win, but the fact that he’s even coming tells you he’s interested, and we frequently have future presidential candidates at that dinner.”

Booker said he came because he was invited by Sen. Tim Kaine, a friend and "hero" who edged Booker out of the competition to be Hillary Clinton's running mate in 2016 and is up for re-election this year. Asked about the potential benefits of appearing if he runs in 2020, Booker said he's focused only on this year's midterm elections.

"This is really a very important state," Booker said. "We could flip a lot of House races here. It's essential that Tim Kaine gets back into office."

Handicappers say Kaine's chances of being re-elected improved when Republicans last week nominated Corey Stewart, a staunch supporter of President Trump who has defended Confederate symbols. Some said Stewart at the top of the ticket would hurt the chances of Republicans holding several House seats as well.

Credit: Herb Jackson/NorthJersey.com
Chelsea Higgs Wise of Richmond, Va., who describes herself as a feminist and organizer, gets Sen. Cory Booker, D-N.J., to stop for a selfie as he returns to his seat during Gov. Ralph Northam's speech at a June 16, 2018 Virginia Democratic Party gala where Booker was the keynote speaker.

Kaine introduced Booker at the dinner as "an enthusiastic singer with a very bad voice," but said he was "tireless" in his efforts to help Democrats and gave Booker some of the credit for Alabama Democrat Doug Jones defeating Republican Roy Moore in last year's special Senate election, a win that cut the GOP's majority in the upper house to 51 seats.

In an interview, Kaine said he extended the invitation because he wanted people to get to know Booker and because he "does such a good job energizing people."

Kaine said he discussed it, however, with former Gov. Terry McAuliffe, who is also weighing a run for the presidency in 2020 and was also one of the speakers at the dinner.

"I said, 'Um, I'd kind of like to get Cory to do the [dinner], what do you think?'" Kaine said. "And Terry is a team player. He said that would be a fantastic idea, we'll have a lot of fun if we have Cory here."

At times during the more than three-hour dinner, Booker got up from his seat near the podium to meet people at other tables. At one point, he posed for photos with House candidate Abigail Spanberger and her parents, Martin and Eileen Davis, who are all originally from New Jersey.

"I want to see him run for president," Eileen Davis said afterward.

After that photo, Booker was buttonholed by Chelsea Higgs Wise of Richmond for a selfie.

"I’m an organizer and facilitator, so I was really excited to see the U.S. senator come and talk about all the progress here in Virginia," Wise said. "He is definitely a superstar coming up, and as a black woman, seeing that representation here is so important."

More: 26 races to watch in the midterms: Will Democrats make significant gains?