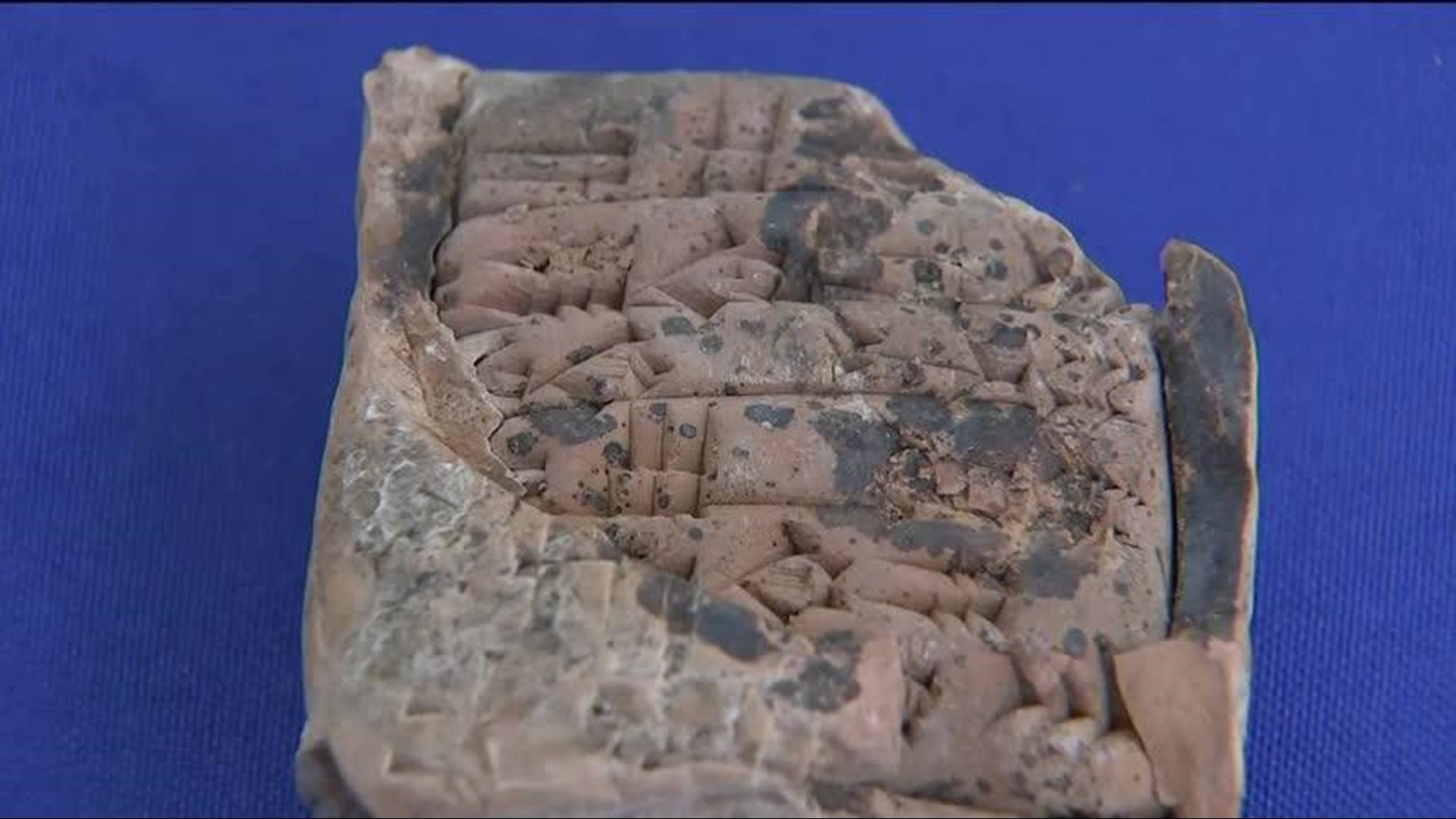 Credit: Jacquelyn Martin, AP
Ancient cylinder seals from Iraq are among the objects being returned by Immigration and Customs Enforcement (ICE), to Iraq, during a ceremony at the Residence of the Iraqi Ambassador to the United States, in Washington, Wednesday, May 2, 2018.

Thousands of antiquities dating back as far as 4,000 years that were smuggled out of the "Cradle of Civilization" have been returned to the Iraqi government by the U.S. Immigration and Customs Enforcement.

ICE said it returned 3,800 artifacts this week, including clay tablets and "seals" that were used by the ancients to authenticate documents. The items were slipped into the United States and shipped to Hobby Lobby Stores, an Oklahoma City-based arts-and-crafts retailer with about 800 stores nationwide.

“Iraq, standing on the land that was once home to the storied city-states and kingdoms of Mesopotamia, has a celebrated heritage," U.S. Attorney Richard Donoghue said.  “We are proud to have played a role in removing these pieces of Iraq’s history from the black market ... and restoring them to the Iraqi people.”

Donoghue said the case dates to 2010, when Hobby Lobby President Steve Green and a consultant traveled to the United Arab Emirates to inspect antiquities being offered for sale. Despite being warned by an expert on cultural property law that the tablets and cylinder seals were likely to have been looted from Iraqi archaeological sites, Hobby Lobby bought thousands of artifacts, Donoghue said.

Hobby Lobby paid about $1.6 million for the items.

More: After the Hobby Lobby scandal, a spotlight on antiquities sales in Israel

Officials say the items were shipped in small batches to a variety of Oklahoma addresses to avoid detection. ICE, for instance, intercepted 300 tablets valued at almost $100,000 that were shipped with labels describing them as tile samples worth a total of about $300 from Turkey or Israel.

ICE said interviews with employees led to the discovery of a "deliberate intent" by company employees to avoid using a customs broker.

Hobby Lobby, which paid a $3 million fine for its role in the complex transfer of the antiquities, acknowledged it should have "exercised more oversight and carefully questioned how the acquisitions were handled."

The company made news in recent years for its successful Supreme Court challenge on religious grounds of a health care mandate that had required them to include contraceptives in their health insurance plan.

The returned items included 450 cuneiform tablets. Cuneiform is an ancient system of writing on clay tablets used in ancient Mesopotamia. The names of people, places and months used on a number of the tablets confirm that they originated in the area of modern-day Iraq.

Earlier today, we’ve repatriated more than 3000 ancient Mesopotamian artifacts to our beloved country and people. We’d like to thank @DHSgov, @StateDept, @ICEgov, and @EDNYnews for the exceptional cooperation and professionalism that led to today’s success. pic.twitter.com/LcAR46XQh2

There were also 3,000 clay bullae — balls of clay on which seals have been imprinted. And there were 371 cylinder seals — small engraved stone cylinders that, when rolled on wet clay, create raised images that can include cuneiform writing or pictures.

Hobby Lobby is a primary financial backer of the $500 million Museum of the Bible that opened last year in Washington, D.C. The museum, however, said the items were never destined for its displays.

In Iraq, the return of the items was gleefully received.

"We’ve repatriated more than 3000 ancient Mesopotamian artifacts to our beloved country and people," the Iraqi embassy in Washington tweeted. The embassy thanked ICE, the State Department and other officials "for the exceptional cooperation and professionalism that led to today’s success."

The return of the antiquities marked the first repatriation of cultural property to Iraq since March 2015, when ICE returned ancient antiquities and Saddam Hussein-era objects, including the head of Assyrian King Sargon II, whose reign began in 705 BCE.

“We will continue to work together to prevent the looting of antiquities and ensure that those who would attempt to profit from this crime are held accountable," ICE Acting Director Thomas Homan. "Nobody is above the law.”

Today, ICE returned 3,800 ancient artifacts to the Republic of #Iraq. The artifacts were smuggled into the United States in violation of federal law and shipped to Hobby Lobby Stores, Inc, a nationwide arts-and-crafts retailer.
Watch the ceremony: https://t.co/MdPUq0djdj 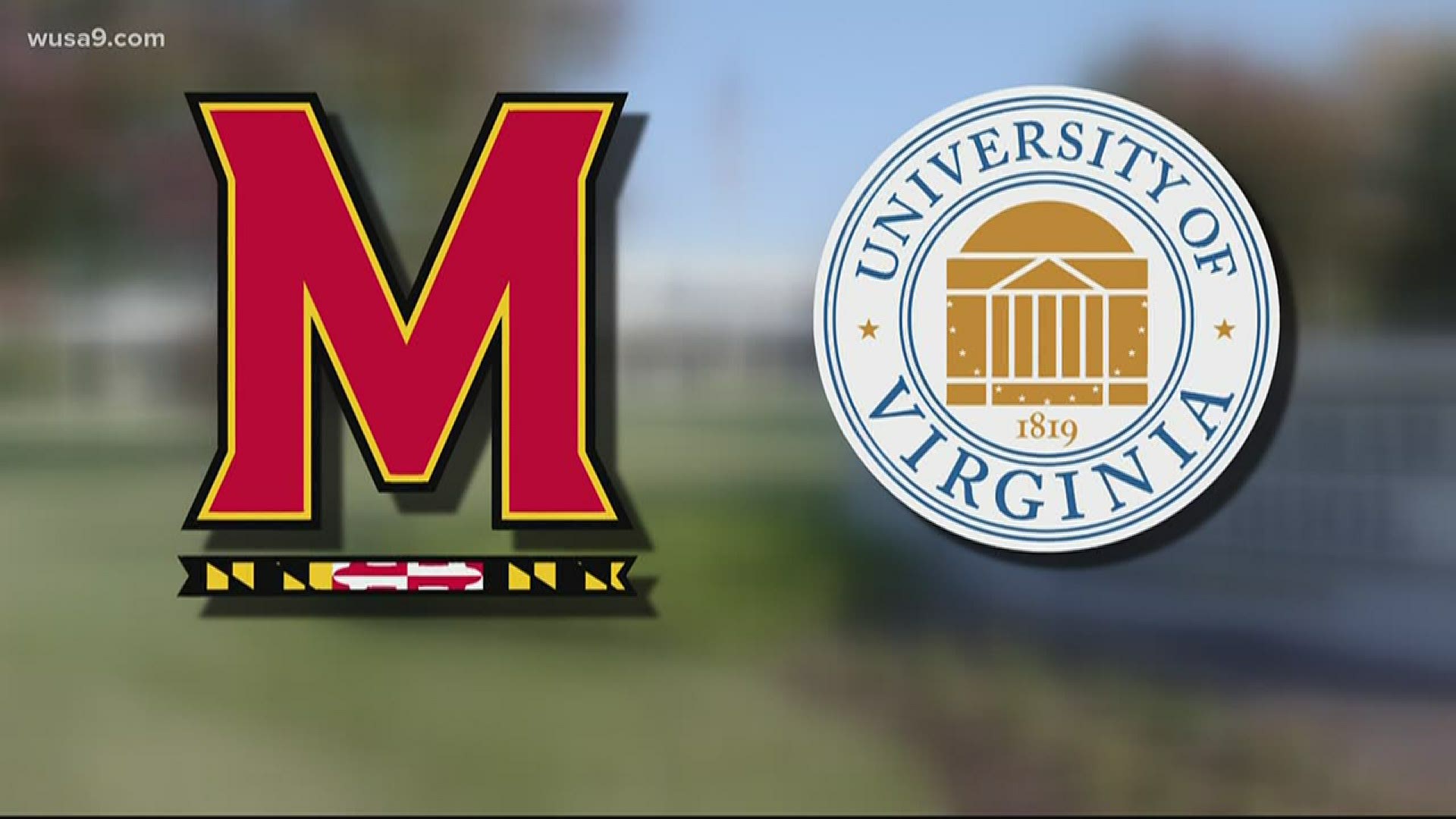