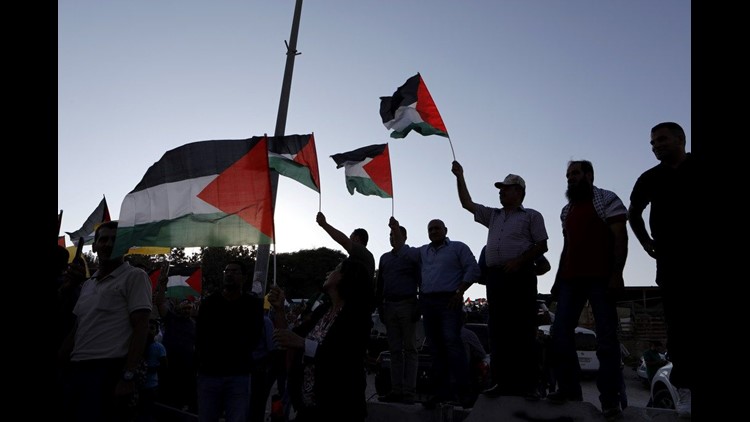 Photo by: EPA-EFE/ABED AL HASHLAMOUN
Demonstrators wave Palestinian flags in front of Israeli troops as they protest against Israel's plan to demolish the Palestinian Bedouin village of Khan al-Ahmar, located between the West Bank city of Jericho and Jerusalem near the Israeli settlement of Maale Adumim, 16 September 2018.

A prominent American-born Israeli settler was stabbed to death by a Palestinian teenager outside a shopping mall in the occupied West Bank on Sunday.

The dead man, Ari Fuld, 45, was well-known by settlers as an outspoken Israel advocate on social media. He was planning a lecture tour in the United States in November, according to his Twitter account.

The Israeli military said the attacker arrived at a mall near a major junction in the southern West Bank and stabbed Fuld before fleeing.

Video footage showed Fuld chasing and firing at his attacker before collapsing. Another civilian also shot the attacker, who was taken to a hospital in moderate condition, the Jerusalem Post reported.  Fuld, a father of four who lived in the nearby settlement of Efrat, was pronounced dead in the hospital.

Israeli media identified the attacker as Khalil Yusef Ali Jabarin, a 17-year-old from a nearby Palestinian village.

The Israeli military carried out house-to-house searches in Jabarin’s village near Hebron, questioned his relatives and confiscated work permits, the Jerusalem Post reported.

The newspaper said his home is being mapped for demolition, a controversial practice Israeli officials say is aimed at deterring potential attackers.

More: 25 years ago this week, Mideast peace seemed inevitable. Now it's further away than ever.