VERIFY: Will a Department of Defense exercise use an electromagnetic pulse to shut down the national power grid?

The Verify team's most popular question this year has many people freaked their electricity will go kaput for three days. 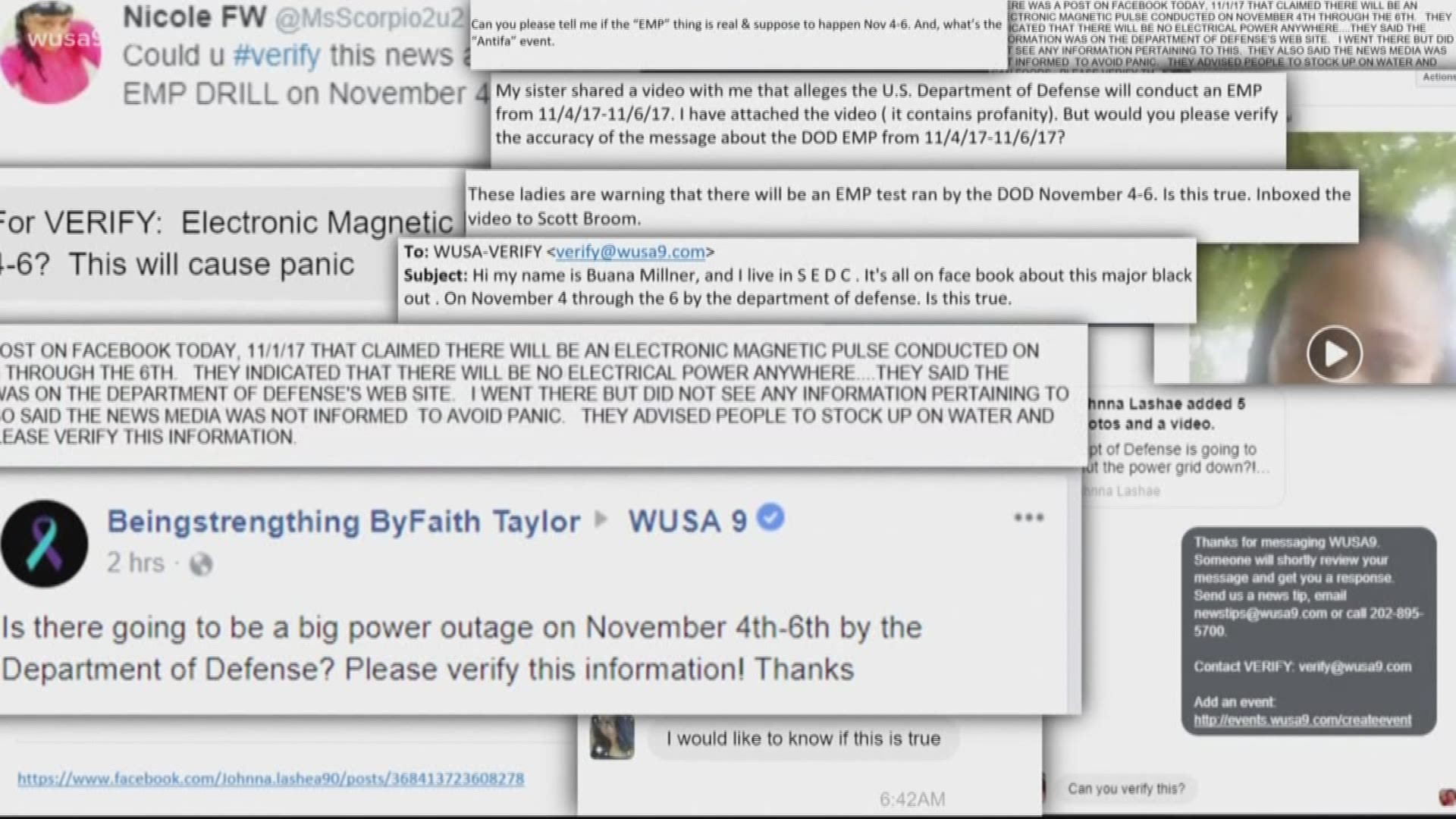 Did the U.S. Department of Defense issue a notice that on Nov. 4 to 6, the entire North American continent will be subjected to an electromagnetic pulse?

No. We verified this one as false back in 2017, but the question is still making the rounds.

People are stressed about the possibility of power shutting down nationwide the first week of November.

The Verify team received six emails, all asking whether the Department of Defense is planning to shut down the country’s power grid from Nov. 4 to 6 using an electromagnetic pulse.

It's a question we've received over and over again. On social media, the theory's growing.

But is it true?

This question should sound familiar. We tackled this hoax back in 2017 after several videos went viral.

RELATED: Verify: Is The Government Planning A Nationwide Blackout?

Back In 2017 we traced that scare to the National Association for Amateur Radio, an all volunteer group of radio enthusiasts.

The scare apparently stemmed from a poorly written press release which said the radio group was planning ‘worst case scenario’ in coordination with the U.S. military.

Radio operators ran an exercise making sure their long-range radios would operate if a major outage hit our national power grid.

The key here is simulation.

Two years ago, the U.S. Army Cyber Command told WUSA9 these exercises are pretty regular drills, and it's not something anyone who's not a volunteer amateur radio operator would even realize.

We called the Army again just to confirm. A spokesperson for their cyber division confirmed that this years' drill will run from Nov. 2 to 17.

"Communication exercises are conducted on a regular basis to allow the volunteer Military Auxiliary Radio System (MARS) members to test their radio equipment and to hone and refine their radio operator skills," Charles Stadtlander, communications director for the U.S. Army Cyber Command, said. "All concepts of the simulated emergency are conceptual and apply only to the amateur radio operators taking part in the exercise ... This exercise will not affect any communications or power grids."

So we can verify this rumor is false.