'We're ready to take control of our destiny:' Salvadoran families, others use Preservation Fund to save affordable housing

Tenants of three Northwest apartment buildings will get access to nearly $11M in funding to become their own landlords as part of the District's first Preservation Fund disbursement. 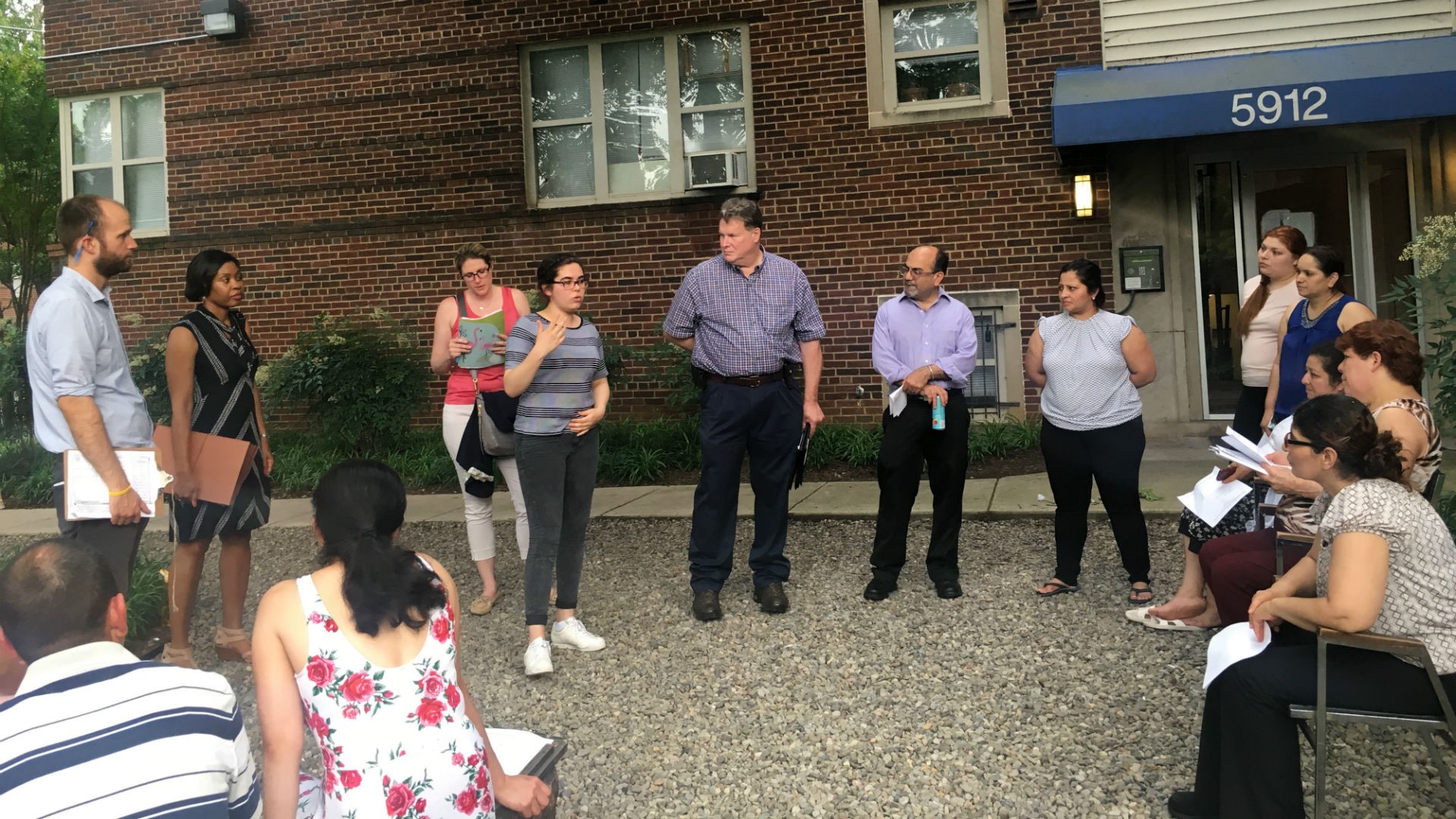 Maria Alvarez and her neighbors faced the very real prospect of being priced out of their apartments in Northwest’s Brightwood Park neighborhood, even as their landlord failed to address persistent issues with pests, leaks and mold in the building.

So, Alvarez pitched them an idea: To become their own landlord.

Her building, 5912 14th Street NW, sits at the intersection of 14th Street and Missouri Avenue. While average home values in the area have risen dramatically in recent years – increasing from $369,000 to $559,000 between 2011 and 2015 – most of 5912’s tenants make only 30 or 50 percent of the area’s median household income of $63,906. On top of that, the building has become home over the years in part to a small community of immigrants from El Salvador with varying degrees of English fluency.

Despite that, Alvarez, herself an immigrant who came to the U.S. 30 years ago to pursue her brother’s promise of a better life in the States, went knocking on doors to convince her neighbors that they had an opportunity to take their destiny into their own hands.

“A lot of people were scared because they were undocumented or didn’t have the right paperwork, and I told them, you know, that doesn’t matter,” Alvarez said through an interpreter. “We can still exercise our right. We can still organize a cooperative and file taxes and do the things we need to do to be a co-op.”

The residents of 5912 eventually agreed to form a cooperative, the 5912 Missouri Tenants Association, to exercise their rights to purchase the building under the District’s Tenant Opportunity to Purchase Act, also known as TOPA. They partnered with the Latino Economic Development Center, the Local Initiatives Support Corporation (LISC DC) and with attorney June Marshall, of the law firm of Holland & Knight, to help guide them through the process.

The timing was fortunate. Two years ago, the Mayor’s Housing Preservation Strike Force recommended the District create a preservation fund to help keep affordable housing in the city. On Thursday, Mayor Muriel Bowser and the Department of Housing and Community Development announced that Alvarez and her fellow tenants at 5912 14th Street, along with two other tenant groups – residents of 1460 Euclid Street and 410 Cedar Street NW – would gain access to approximately $10.78 million in acquisition financing in the fund’s first round of housing projects.

“Just as the creation of affordable housing is critical to the future of our city, so is the preservation of existing units,” Mayor Bowser said in a press release. “That is why our Preservation Fund is pivotal in helping us retain affordable housing across the District, allowing us to move preservation projects along more quickly and leverage private investments in order to maximize our resources and reach more Washingtonians.”

“This is a terrific jumpstart for a new fund and a new program and we’re really very proud,” Polly Donaldson, director of the Department of Housing and Community Development, said. “I know Mayor Bowser wanted to make sure these funds were used and used swiftly.”

LISC DC is the fund manager for all three inaugural projects. Ramon Jacobson, LISC’s acting director, says the organization was excited to get involved with the Preservation Fund.

“Doing these projects is like a custom-tailored suit,” Jacobson said. “Every one takes special measuring and sewing and cutting. [The Preservation Fund] gives us a standard product, in some ways.”

That “product” is a reliable source of acquisition funding, which can be the biggest hurdle for tenant groups hoping to actually use TOPA, Jacobson said.

Jacobson said the 5912 14th Street property was appealing to LISC DC because of the character of the Brightwood Park neighborhood, and of the people who live in it.

Credit: Ramon Jacobson / LISC DC
Tenants of 5912 14th Street NW meet outside to discuss forming a co-op to purchase their building under the District's TOPA law.

“It’s not filled with historic monuments. It’s not filled with historic restaurants. But what it’s always been filled with are smaller apartment buildings with a lot of mix of immigrants from different countries: East Africa, Ethiopia, the Caribbean, Trinidad, Jamaica, and then also a lot of folks from Central America,” Jacobson said. “Whenever you’re an immigrant in a new country I think you find people who come from your same country, and you weren’t related before you moved in, but as you share the hallways and the elevators and laundry rooms you become a kind of family. And so the remarkable thing, I think, about those folks is that they saw the opportunity to take the building as a community and to make tangible improvements in the way it was managed, in the way trash was managed – basic stuff like laundry room and roof repairs, dealing with leaks mold, all these sorts of things the landlord might do – they were like, ‘We want to do this. We’re ready to take control of our destiny in this country.’”

For Alvarez, who lives in the building with her daughter, it was a chance to secure stability for her family.

“It means a lot to me,” she said. “A lot of the residents in the building are single mothers, they have two or three kids. I also am a single mother. So I just kept telling people, ‘Don’t be scared. We can do this. I’ll be the president. But we have to be united and not be scared.’ And we were able to do it. We have the building now.”

“Yes, we’re still poor,” she added, “but we’re making a good life and we have a good place to live.”

The first round of Preservation Fund projects is expected to secure approximately 80 units of affordable housing in Northwest. The Department of Housing and Community Development said another 850 units are being targeted for the fund next year by a second fund manager, Capital Impact Partners.