After being disqualified from a tournament for not wearing personal protective masks, the Word of Life girls basketball team remained outraged over the decision. 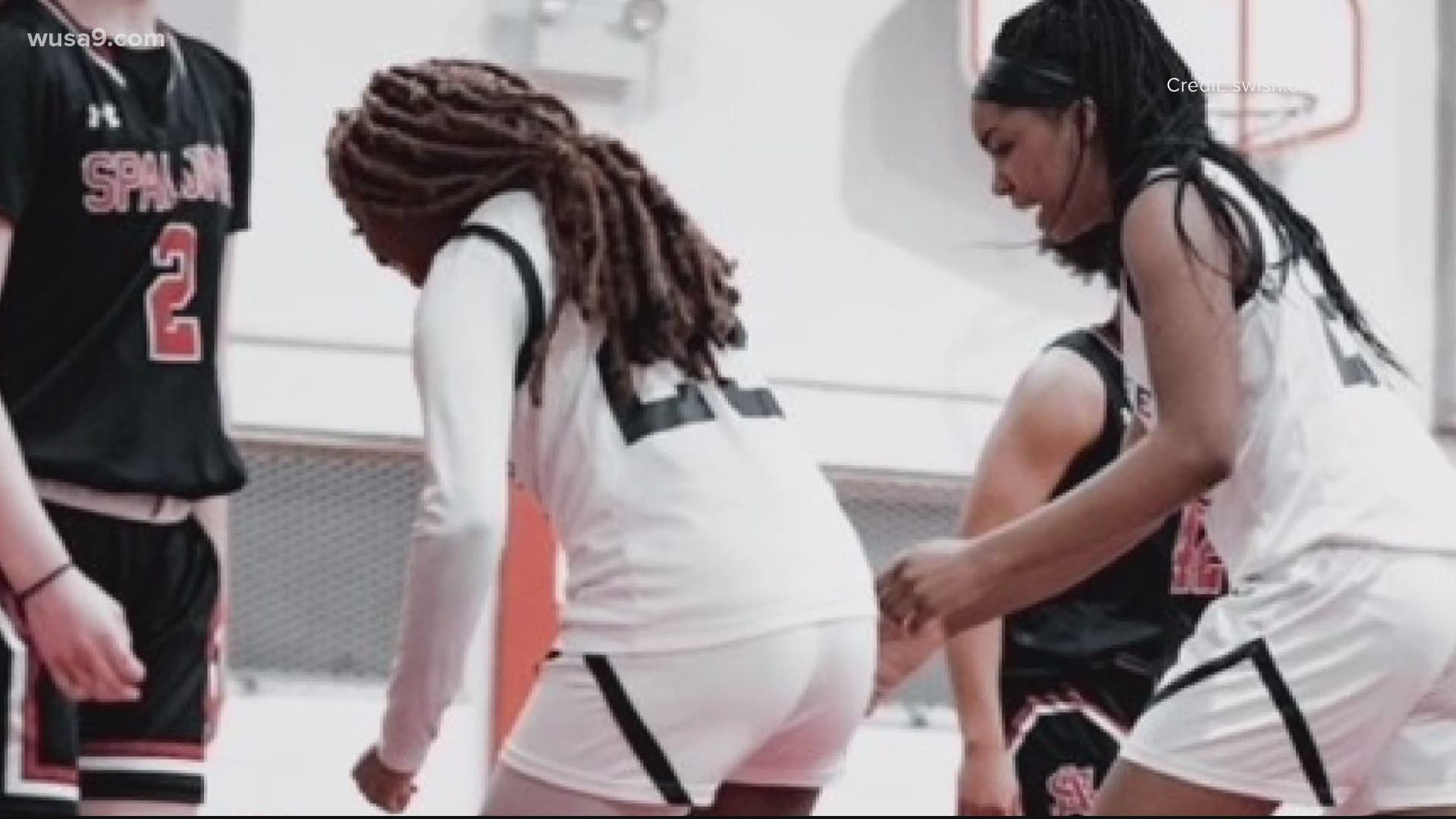 SPRINGFIELD, Va. — A group of parents expressed frustration and outrage on Friday after their children's high school basketball team was disqualified from a state tournament after playing without personal protective masks, after the parents allege that the team was told they could take them off by the opposing team and the referee.

The girls' basketball team for Word of Life Christian Academy, located in Springfield, qualified for the Virginia Independent Schools Athletic Association (VISAA) state tournament despite playing the season with only six players.

"Throughout the season, these girls have worked hard. They had six am practices," said Velvet Marion, whose daughter plays on the team.

On Tuesday, the team traveled to Stone Bridge High School for a tournament matchup.

Before the game, Marion and other parents claim the opposing team and the referee for the game told them they could take off their personal protective masks for the contest. Word of Life went on to win to advance in the tournament.

However, the team found out from VISAA officials that they were disqualified for playing without masks.

"My daughter was really saddened by it," said father Kevin Harris. "All the work that you put in. To have that happen is one of those things that throws you back.”

"I think we kind of all were just in awe," said Nakiia Buyck, a mother of another player. "To know that they went through this season to be picked out is heart-wrenching.”

The shock of the disqualification soon turned to frustration when the parents claim they saw players of other teams in the tournament, including the team they were scheduled to play next, also not wearing masks at times.

Buyck alleged that a boys' team that was also disqualified was able to see their punishment overturned by the league.

Despite appeals from Word of Life, the team's tournament hopes were over.

Following the disqualification, the parents said they noticed something in particular about another team that could continue playing despite the parents allegedly seeing them not wearing masks.

"It doesn’t help that the other team was all white," Harris said. "We felt like it was unjustifiable. We were told that we didn’t have to wear (the masks). You see other teams get away with the same thing. It’s really discouraging and it’s troublesome.”

"This is just a slap in the face," Buyck said. "When we go to another school and they set the policy, we follow that policy. You mandate rules to them and you let them know you can’t break them but you have another child that does the same thing and you let that go. It’s a double standard.”

"If the rule is the rule, it is across the board. They should maintain that. When you don’t, that looks partial," she added. "The decision is partial. It's based on something else and that’s the issue.”

Kemper did not provide an official statement or interview but said that Word of Life signed an agreement to wear masks at all times or face disqualification.

He also said the Stone Bridge athletic director and the game's referee "were reported."

Word of Life School Administrator Timothy Rockafellow said the school sent letters of appeal to Kemper and the VISAA board this week but claimed they were disregarded.

In a statement sent to WUSA9, Rockafellow said Kemper would not change the disqualification decision.

"It is very discouraging to see the impact of an unjust and inconsistent decision as our team's opportunity to win a state championship was stolen out from under them without any consideration of the facts presented and reasons why masks were not worn by either team," Rockafellow wrote. "Also, all of the players were required to submit to COVID tests before they could play in the tournament."

During a game, has anyone experienced a player passing out, turing stone cold and ending up in the hospital from lack of oxygen due to wearing a mask? WE DID. And now we are penalized for being concerned about it happening again. God knows!

WUSA9 called and emailed Stone Bridge High School staff about the alleged call to play the game without masks but did not receive a response.

Days after the disqualification, the parents know the team cannot return to the tournament this year.

However, they hope that by speaking up about their allegations another team won't suffer a similar fate moving forward.

"We can’t get back in so it’s not even about that. It’s about bringing light to the situation so that this doesn’t happen to anyone in the future," Harris said. "I would like (VISAA) to acknowledge what it really was that was going on and issue an apology, but I doubt this will happen."

"We feel like it was not justified," added Velvet Marrion. "Our girls were treated unfairly.”