A Virginia woman who flipped off President Donald Trump is now running for office in Loudoun County. 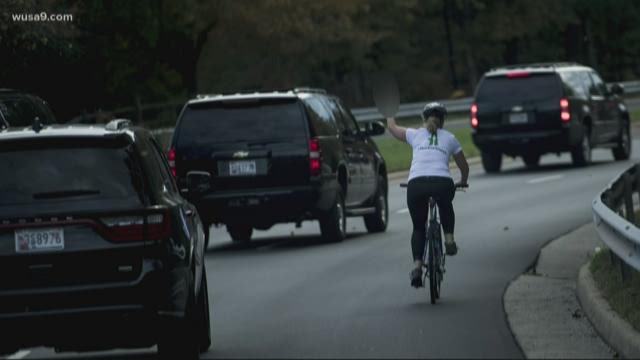 LEESBURG, Va. - An act of resistance has sparked a political campaign.

A Virginia woman who flipped off President Donald Trump is now running for office in Loudoun County.

Wednesday, Juli Briskman walked into the Loudoun Elections board and filed papers for her first political campaign. The 51-year-old would probably not be here if she hadn't done that stunt last year.

“It was spontaneous,” Briskman said.

While riding her bike, she gave President Trump's motorcade a middle finger salute. A press photographer snapped the picture and it went viral.

After that, the government contractor she worked for fired her. She spoke to WUSA9 when she sued the company.

“Rather than appealing, I decided to turn my energy toward running for office to make changes,” Briskman said.

She's hoping others in her district are as angry as she is with the Trump administration and will vote for a finger flipping Democrat.

Briskman's opponent is Republican Suzanne Volpe who has represented the Algonkian district since 2012.

“I would not have done that do anyone, Volpe said.

Republicans maintain a majority on the Loudoun Board of Supervisors, even though the county votes reliably blue when it comes to statewide races.

The election for the Loudoun board of supervisors isn't until next year, in November of 2019.

Briskman says she'll have plenty of time to pound the pavement and try to meet each of the 10,000 voters in her district.

Hillary Clinton won Loudoun county with 55 percent of the vote. But, the county has also been represented by a Republican in Congress for nearly 40 years. The current representative, Barbara Comstock, is now in a tough challenge by Democrat Jennifer Wexton.

RELATED: Woman who flipped off president’s motorcade gets job offer, $100k in donations