The hike is between the grave decorated Marine Chesty Puller and that of decorated soldier Audie Murphy. They plan to reach Arlington National Cemetery on the Fourth of July. 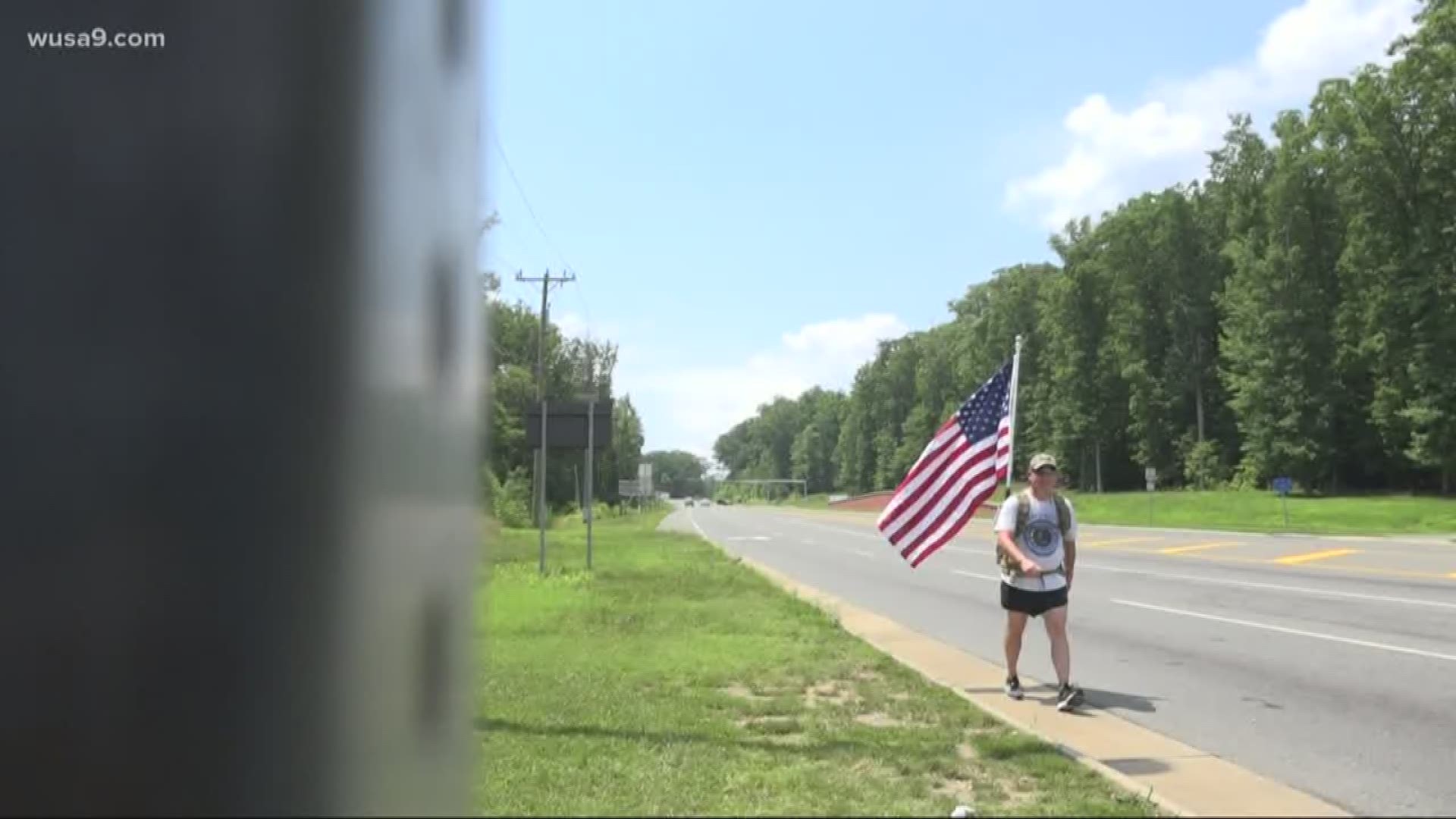 ARLINGTON, Va. -- He was looking for a challenge and for a way to honor service members.

Tom Sandler is a retired Army Veteran and continues to help serve veterans.

He came up with an idea to further his service after running several marathons with a friend.

What if they walked between the gravesites of decorated Marine Chesty Puller and that of decorated soldier Audie Murphy?

That was two and a half years ago.

RELATED: Fireworks can trigger PTSD symptoms for some veterans

There, Sandler asked Muerdler if she would be interested in his idea. She said yes. But like with his friend from years earlier, nothing solid came of it.

It wasn’t until Sandler was in church that he heard a story that inspired him. A passage from the Bible describes Jesus telling a man who doesn’t believe he can stand to just "get up and walk." For Sandler, who said he “just kept making excuses,” this was the push he needed.

Between the two of them, like a relay, they pass the American Flag.

“One flag, hero to hero,” Sandler explained. Once they reach Murphy’s gravesite, they plan to fold the flag along with a Navy veteran friend and present it to Murphy.

But, that won’t be until they hike over 150 miles. And the walk is grueling. The day that the two set out, a heat wave began in the area, driving temperatures near 100 and the heat index well-over. But with ruck and American flag in tow, the two kept on.

It’s more than just a hike, too. According to a GoFundMe set up by the pair, they are also raising money for several different veteran-focused charities: Middlesex Museum, Operation 99, Leashes of Valor, Restoration of the VFW Post 3103 Building in Fredericksburg, N Stafford JROTC, and Operation Ward 57.

On Monday, the pair had reached Stafford, Virginia after walking 23 miles and spent some time surrounded by friends and family, some of whom are following the two and some who just came out to support them. They also sold shirts to pay for gas (Sandler explained that they take turns driving an RV ahead of the other while they hike) as well as to raise money for charity.

On Tuesday, they plan on visiting the Marine Corp Museum before making their way to their final destination in Arlington National Cemetery. They will complete the mission on the Fourth of July.

“It’s just an amazing adventure to honor our heroes,” Sandler said. You can follow their journey here on their Facebook page.