Some Virginia voters are still undecided, but the survey shows voters favor Terry McAulliffe and Attorney General Mark Herring. The Democratic primary is on June 8. 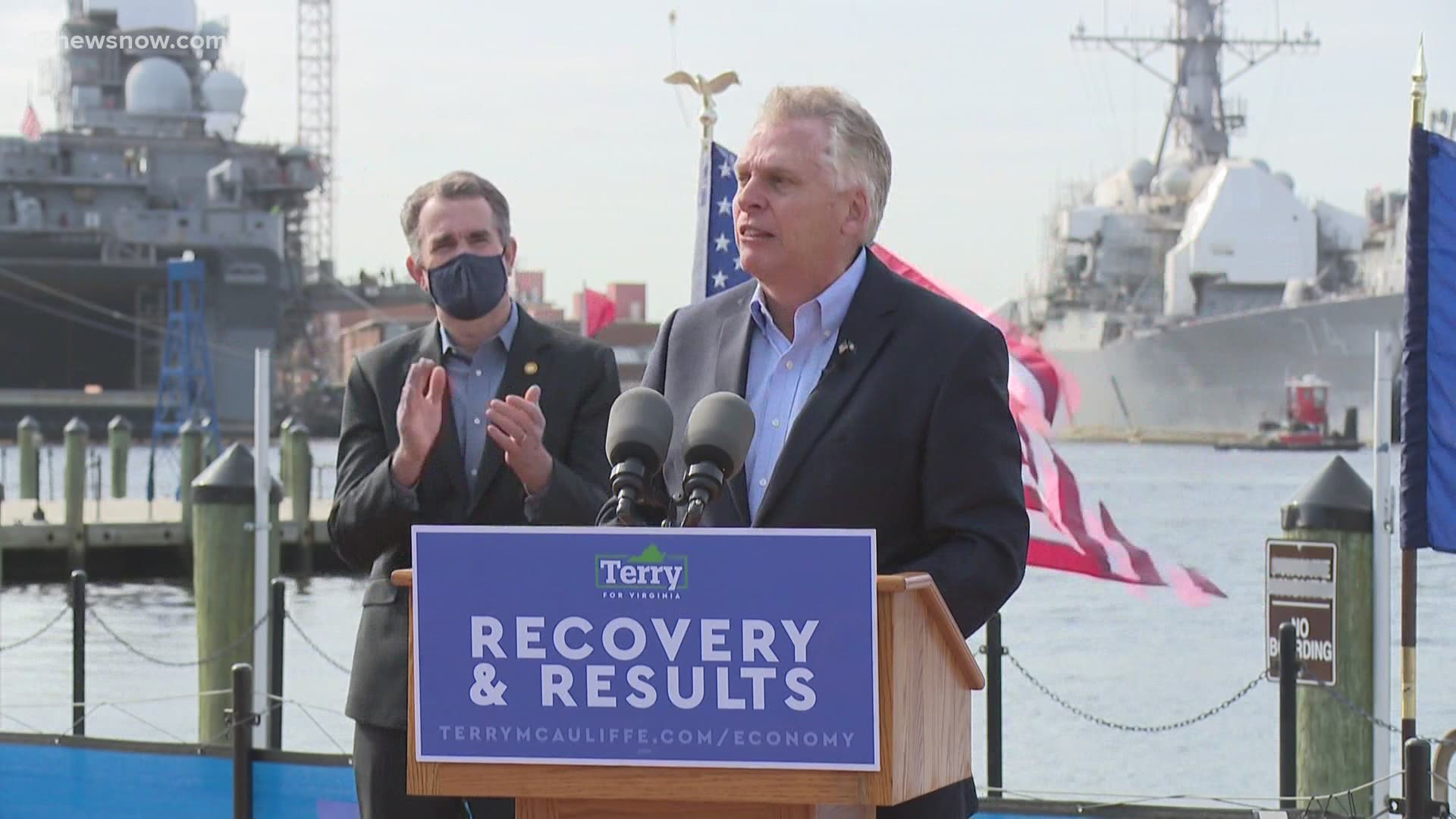 NORFOLK, Va. — Former Virginia Governor Terry McAuliffe is the favorite of the candidates in the Democratic gubernatorial field, according to a new survey released Thursday morning.

The Christopher Newport University Wason Center for Civic Leadership polled more than 800 registered voters in the state from April 11 to April 20 and found that nearly half (47%) their weight behind McAuliffe.

This comes as the Commonwealth inches toward the state primary for the Democrats on June 8, which is just six weeks away.

With McAuliffe picking up such a big lead, the other four gubernatorial candidates are trailing far behind, according to the poll, and 27% of Democratic voters are still undecided.

CNU Political Science Professor Quentin Kidd says McAuliffe has much name recognition from his first time as governor, and he is well-positioned for the general election in November.

"He's going to come out of this primary as a clear winner," said Kidd. "He's going to have a big bank account. And he has indicated that he is not backing down from a good fight with Republicans this year."

13News Now and Christopher Newport University will team up to produce a debate between the five Democratic candidates for Governor. It will take place on Tuesday, June 1, exactly one week before the primary. The debate will take place on the campus of CNU, and will be broadcast live on WVEC-TV and will be streamed on the station's digital platforms.

As for Republican candidates for governor this year, CNU did a poll in February and it showed Amanda Chase getting 17 percent of the GOP vote, which was enough to put her ahead of her rivals, but 55 percent of respondents were undecided.

Republicans will choose their nominee in a virtual convention on May 8.

As for the Thursday poll regarding the Democrats, in the Attorney General's race, Mark Herring is way ahead of Delegate Jay Jones 42% to 18%. However, 34% of voters are still undecided about this race.

Jones has gained more support though. A previous poll by the Wason Center that was released in February shows that Herring led Jones 42% to 3%, with 50% of voters still undecided.

Many Virginia voters are also undecided when it comes to the lieutenant governor's race (64%). Leading the crowded pack of candidates in this race is Delegate Sam Rasoul who has 12% of Democratic voters' support.

Before Delegate Elizabeth Guzman withdrew her candidacy, she led the other six candidates with 4% of voters' support.

None of the remaining candidates received more than 2% support.

Even though findings show an overwhelming amount of indecision among many Democratic voters, enthusiasm is high with 83% who polled that they are very or somewhat enthusiastic to vote in the primary.

See the poll findings below: