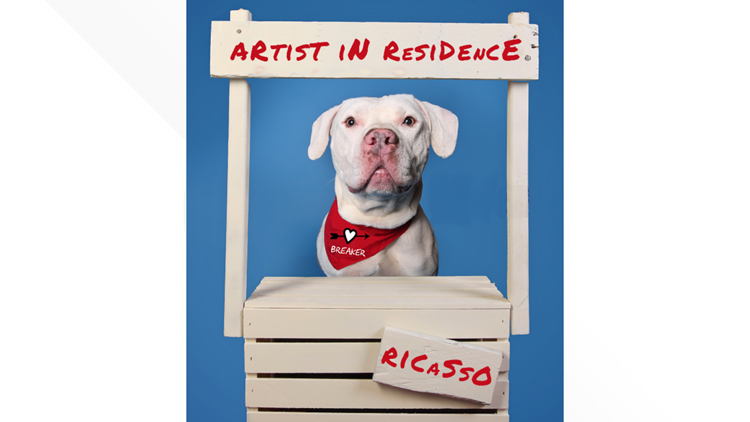 ALEXANDRIA, Va. — An "Artist in Residence" at the Animal Welfare League of Alexandria spends his time painting colorful masterpieces, but not with a brush -- with his tail.

Rico, nicknamed "Ricasso," is a six-year-old staffordshire terrier who's lived at the shelter for the past 15 months. He'd been living at the shelter for nearly a year when volunteers noticed his "happy, wagging tail might be able to do more than convey his mood," a press release said.

Volunteers thought he might be able to paint, and he did. Over the fall of 2019, Ricasso produced 20 pieces of artwork as part of his debut collection, which were displayed through the halls of the Animal Welfare League of Alexandria.

The art decorated the halls, but visitors started asking how they could own a piece of Ricasso's art.

All 20 pieces in Ricasso's collection were sold.
Animal Welfare League of Alexandria

"It was then that the 6-year-old realized that he had an opportunity to give back to the shelter that had been sheltering him," the release said."

The Animal Welfare League organized an auction for his work "to give other animals the chances that he'd been given, and to help more dogs and cats find families of their own."

The auction on Dec. 6 was sold out, and Ricasso's entire collection was sold. His 20 pieces raised over $4,000 for the welfare league.

His art raised almost $4,000 for the shelter.
Animal Welfare League of Alexandria

"Owning a Ricasso original means so much to me," one of the bidders said. "The value isn’t just in the painting but also knowing the journey the artist took during his time at the shelter."

Ricasso is still at the Animal Welfare League of Alexandria. He spends his time between a foster home and the shelter.

"While he may be done with painting for the time being, he continues to undertake new challenges, including training classes with his foster dad and exploring scenic Alexandria with his team of volunteer friends," the release said. " And, of course, ahead of him is his biggest adventure yet: finding a family to call his own."

RELATED: You can give these Alexandria shelter animals a 'Home for the Pawlidays'