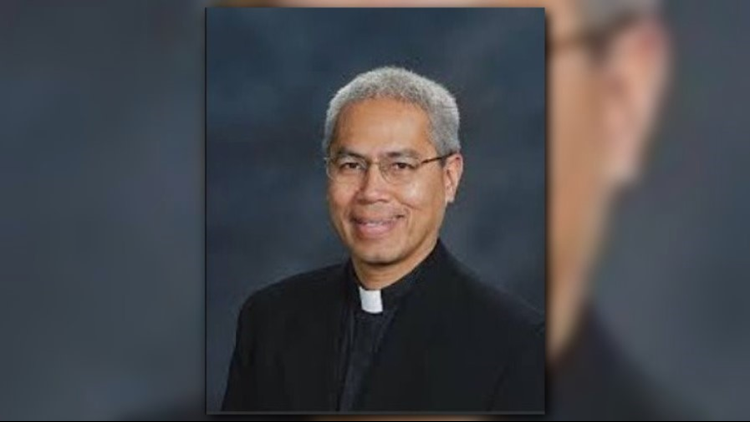 No charges for Virginia priest on leave after 'inappropriate contact' allegation

PURCELLVILLE, Va. -- A Purcellville priest will not face any criminal charges after he was investigated for "inappropriate contact," the Loudon County Sheriff's Office said Friday.

Father Ronald S. Escalante was placed on administrative leave from Saint Francis de Sales church in Purcelville after the investigation was announced.

He has been part of Saint Francis de Sales church for the past decade and a pastor since 2012.

The Arlington Diocese placed Escalante on leave on Friday, Dec. 7, pending the outcome of the investigation. As of this breaking news report, WUSA9 had not yet reached out to the Arlington Dicoese to inquire about Escalante returning to the parish.

No criminal charges against Purcellville Priest. @LoudounSheriff concludes investigation into “potential inappropriate contact by a member of their clergy” after being contacted by the Catholic Diocese of Arlington. @wusa9 pic.twitter.com/MzYxJWAxnL

Sheriff's spokesman Kraig Troxell said the Diocese contacted them regarding "potential inappropriate contact" by a member of their clergy.

For church member Jen Du Plessis, it was upsetting to learn Escalante was being investigated.

Du Plessis is an author, speaker and podcaster who gives advice to small businesses. She's good friends with Father Escalante and reached out to him while she was vacationing in Key West, Florida on Sunday. She never heard back and found out about the investigation when a WUSA9 reporter contacted her Monday.

"I've never seen him do anything that would be in appropriate. Ever. And I have been at, we have dances, we have social events. He's been here at my home," said Du Plessis.

A spokesman for the Loudoun County Sheriff's Office said that the Dioceses reported the allegations to them on November 21st. Diocese Spokeswoman Angela Pellerano said in a statement

"On November 21, we reported the complaint to the Loudoun County Sheriff's Office. At that time, we began our own investigation and ensured that Father Escalante would not be present in the parish while we conducted this investigation. We presented out findings to the Diocesan Review Board. After having received counsel from the Diocesan Review Board, Bishop Burbidge then made the formal decision to place him on administrative leave."

The Arlington Diocese posted on its website last week that "Bishop Michael F. Burbidge has placed Father Ronald S. Escalante, Pastor of Saint Francis de Sales Church, Purcellville, on administrative leave pending the outcome of an investigation of alleged boundary violations involving a minor and adults which transgress the Code of Conduct for Clergy in the Diocese of Arlington. In accord with diocesan policy, these allegations were reported to local law enforcement and considered by the Diocesan Review Board. Father Escalante denies the accusations, and he has stated that he is cooperating fully with the investigation."