Hundreds of seeds arrive in mailboxes across DMV. Don't plant them.

Maryland and Virginia are investigating why people are receiving unsolicited seeds. 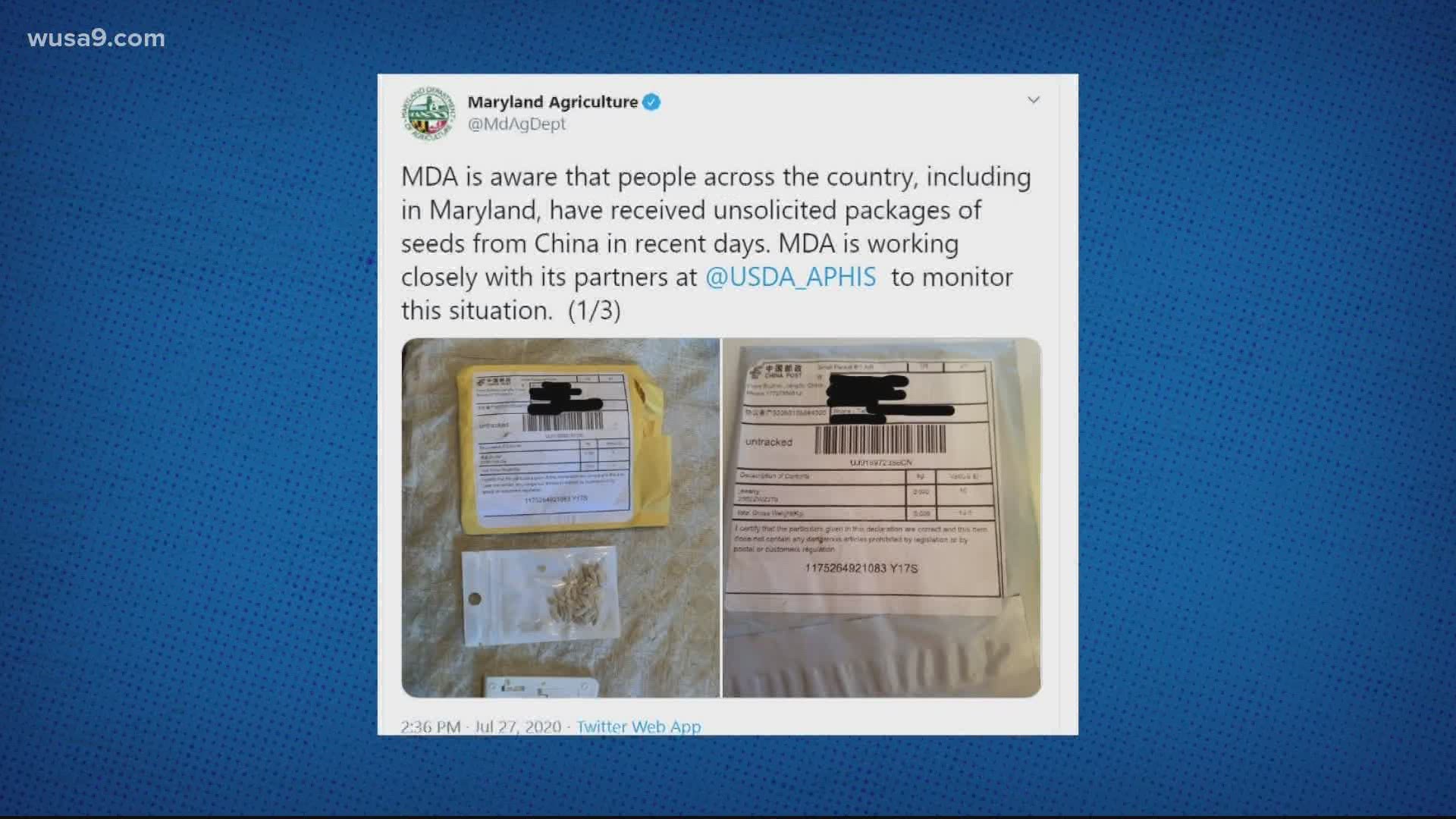 WASHINGTON — Have you received mysterious seeds in the mail? Hundreds of people in Maryland and Virginia have gotten packages sent from China they didn’t order. In the packages. they found what looks like seeds?

Maryland and Virginia’s agriculture departments warn it could attempt to spread invasive plant species, but the USDA believes it could be a scam.

Across the country, random packets of seeds keep arriving on doorsteps. Hundreds of seeds landed in Maryland and Virginia this week. In Missouri and Washington state people got the same thing: a packet of seeds no one ordered.

Some of the packages come from China, others from Uzbekistan.

What is going on?

“We don’t know and that’s part of the danger,” Don Robison, the Seed Administrator for the Office of Indiana State Chemist said. “But, danger with a small ‘D.’”

Agriculture departments across the country have opened investigations. The big fear is that these seeds could be an attempt to spread invasive plant species.

“China would have different diseases different invasive species than we do and we want to make sure this doesn’t get planted,” Robison said.

Michael Wallace from the Virginia Dept. of Agriculture and Consumer Services said he believes Virginia isn't the first state to receive the suspicious seeds, instead thinking Utah might have seen some of the first instances.

MDA is aware that people across the country, including in Maryland, have received unsolicited packages of seeds from China in recent days. MDA is working closely with its partners at @USDA_APHIS to monitor this situation. (1/3) pic.twitter.com/x6GiVyoUj4

While Maryland and Virginia investigate, the USDA believes it could be part of a scam.

USDA Investigates Packages of Unsolicited Seeds from China
Javascript is disabled in this browser. This page requires Javascript. Modify your browser's settings to allow Javascript to execute. See your browser's documentation for specific instructions.

We know what you’re thinking: ‘What kind of scam sends random seeds at no cost to thousands of people?’

According to the USDA it is called a ‘brushing scam.’ That is a scam where an online seller sends out unsolicited items to people. Then the seller posts false reviews of their products to boost sales.

Sounds harmless, but the Better Business Bureau warns it could mean something worse. If a seller has your address and name, someone out there could have more of your personal information.

As for what people should do once receiving the seeds, Wallace said you should contact officials rather than throw them out.

Instead, call your state's Department of Agriculture who will then send them to the USDA to help investigate the seeds. Wallace said the department has received hundreds of calls and emails about the seeds, which he thinks are being spread across the country.

If you already planted the seeds, Wallace says to immediately pull them out and then double bag them with sealed plastic. Let the bags sit in the sun for several days to make sure they're dead and then throw them out.

He also recommends washing and sterilizing all pots and pans used with a 10% bleach solution, and said burning plant material is also effective.