A 61-year-old man was arrested Sunday for simple assault after he "forcefully exhaled" on a 68-year-old woman protesting outside the president's golf course. 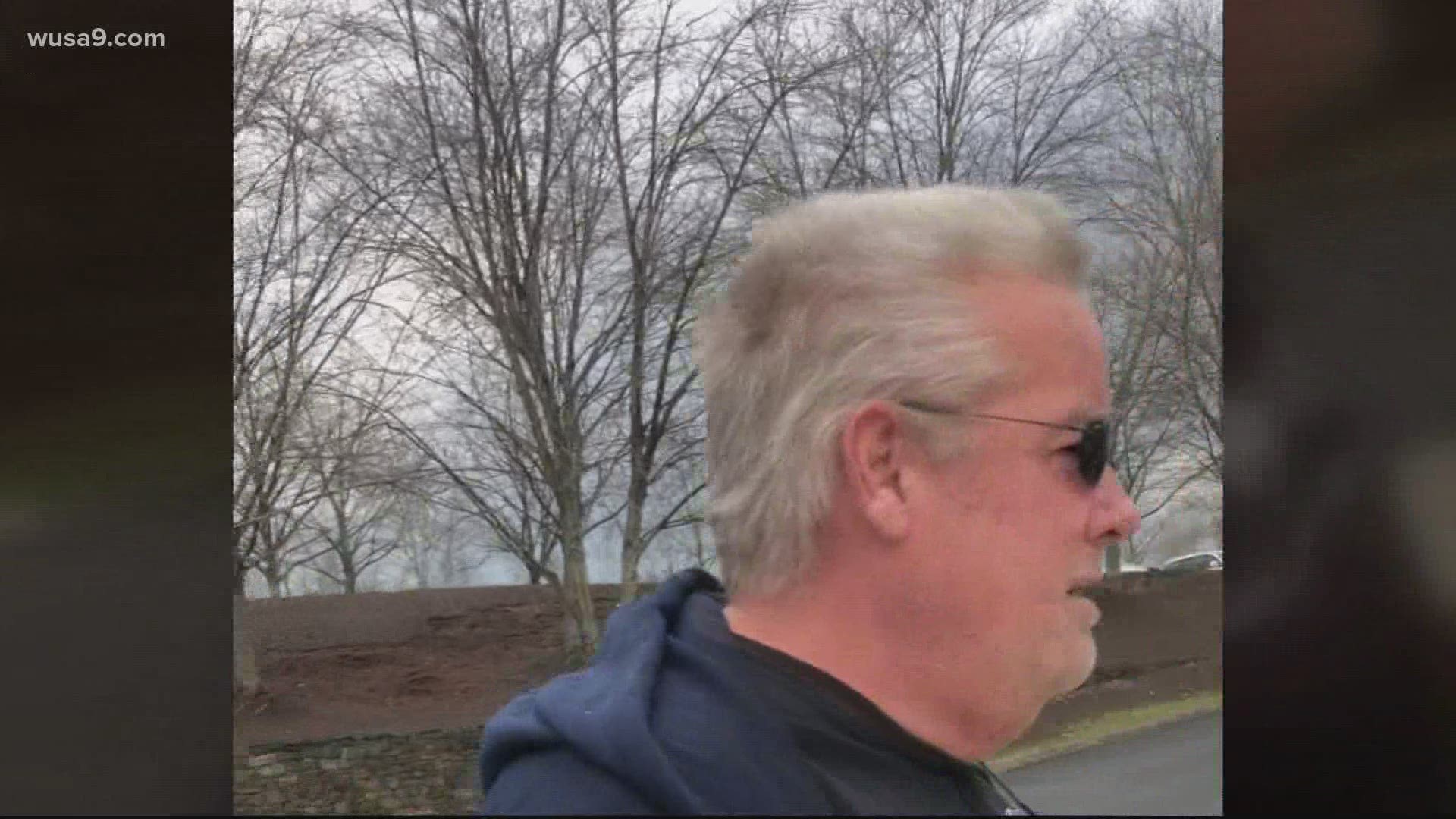 STERLING, Va. — A Virginia woman says she has canceled her Thanksgiving plans after a maskless Trump supporter purposefully blew on her and her friend as they were protesting outside of President Trump's golf course Saturday. Kathy Beynette, 68, recorded the interaction on her cell phone and posted it on Twitter, ad the video has since gone viral.

The man involved, 61-year-old Raymond Deskins, has been charged with simple assault by the Loudoun County Sheriff's Office.

“If he had COVID and has given me COVID, that’s not a simple assault for me," Beynette said. "I’m in a high-risk category. I could die."

Beynette said she and two of her friends were protesting outside of Trump National Golf Club in Sterling, Virginia Saturday morning, as they had been doing regularly for the past three-and-a-half years.

Opposite them, she said she noticed a group of about nine people wearing Trump gear demonstrating across the street. One of them was a man she said she recognized as having threatened their group before -- Deskins.

Have you seen this VIRAL VIDEO?🚨@activistkathy recorded this man, wearing Trump gear but no mask, blowing on her and her friend as they protested at @realDonaldTrump's VA golf course Sat.

Hear from her on @wusa9 at 11. pic.twitter.com/6TfhTxuNUY

“I looked up, and the guy was coming at me, straight at me," she said. "I had my phone, so I flipped it around, and you can hear me saying, 'Get back, you’re too close. You’re not wearing a mask.' And he laughed and then turned and violently expelled whatever was in his lungs on my friend, who is 69 years old, a senior citizen at high risk for COVID. Then he blows in my direction, and then we’re saying, this is an assault."

Beynette said he laughed and told them to contact the cops, which she and her friend did. She said some Loudoun County sheriff's deputies were standing nearby, so they told them.

She said the officers recommended she and her friend try to obtain a citizen's warrant through a Loudoun County Magistrate. In a statement put out by the sheriff's office, they said the officers had not seen the interaction.

Frustrated by an initial lack of action, Beynette said she and her friend did just that. Sunday, the chairman of the Board of Supervisors, Phyllis Randall, wrote a letter to the sheriff and the commonwealth's attorney, urging them to conduct an investigation.

Later that day, the sheriff's office announced that they arrested Deskins for a misdemeanor simple assault, who was soon released.

“Now I call it the gates of hell -- I am never going there again," Beynette said, referring to the golf course. "It’s not safe. Those people are dangerous.”

Beynette said since Election Day, more Trump supporters have started to congregate at the golf course to protest opposite them, creating what she considers to be dangerous situations.

"The person who did this assault has threatened to beat up husbands," she said. "They use a lot of foul language. They don’t wear masks, and they get in our faces."

Beynette said she's also had to cancel her Thanksgiving plans, worried about infecting the small group of family members she was planning to celebrate with in Virginia.

“Since now it’s possible that this man has intentionally infected me with COVID, we’ve had to cancel our Thanksgiving," she said. "It feels sad. COVID is sad already…I will have no Thanksgiving because of him.”

She and her friend plan to get tested for coronavirus this week and hope that Deskins does the same. Beynette said she'd like him to notify her of the results and send her an apology.

WUSA 9 reached out to Deskins for comment multiple times Monday and did not receive a response.