Principal of Lake Braddock Secondary School is out effectively immediately while a federal investigation continues into allegations from two years ago. 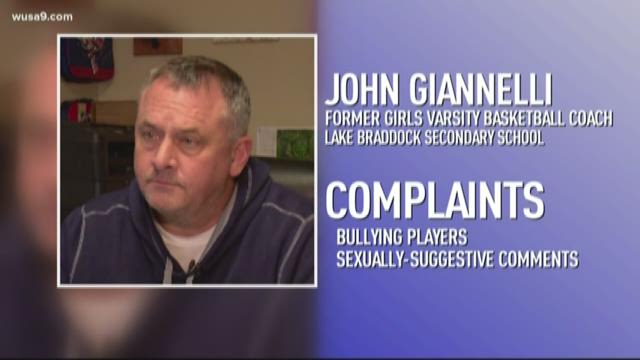 There's now fallout after a WUSA9 investigation into a sexual harassment scandal at the biggest school in Fairfax County. The principal of Lake Braddock Secondary School is out effectively immediately while a federal investigation continues into allegations from two years ago.

On February 1, the Lake Braddock community received word from FCPS headquarters that Principal Dave Thomas is retiring from LBSS after serving the school system for 25 years. The statement went on the read: "Effective Monday, Dr. John Banbury will be joining the team as interim principal and will remain in this capacity in the coming months."

Federal investigators at the Department of Education Office of Civil Rights are looking into whether school officials did enough to protect girl basketball players who accused their coach of sexual harassment.

Lizzie Fitzpatrick, who is now in college, lodged a formal complaint with school officials two years ago. She is pleased that someone is being held accountable and hopes this will put increased pressure on school officials to listen to students when they make allegations.

"It seems like everyone is concerned now, but no one was concerned when I was bringing up stuff," said Fitzpatrick.

Fitzpatrick is still affected by what happened to her at Lake Braddock. She was on the varsity girls basketball team run by Coach John Giannelli. She and several other teammates accused him of sexual harassment and inappropriate behavior. In 2015, she volunteered to be the one to formally complain.

Lizzie made the allegations to Activities Director Mike Clark. Clark says he told principal Dave Thomas about those allegations. Thomas has said he was not told.

The coach stayed on the job and kicked Lizzie off the team. It was her senior year.

Lizzy believes the principal knew about her allegations should have stepped in.

"I think he could’ve protected us a lot more and done his job as principal and as a person and as a decent human being," said Fitzpatrick.

Susan Gallier 's daughter Betsy played on the team with Coach Giannelli. Gallier says she complained directly to principal Dave Thomas back in 2013, the year the coach arrived.

"I clearly called the very first season that he coached in 2013. And I spoke to Dave Thomas and I also spoke to the AD's (athletic director) office. And, I even said to them, if you don't get on this now, you are going to have a problem in the future," with this coach, Gallier said.

Giannelli was forced to resign in 2016 after the parents on Fitzpatrick's team found out about hers and their own daughters' allegations against Giannelli. They detailed the complaints in surveys and the coach was out in days.

But Lizzie’s entire high school experience was altered from what she experienced.

Bill Park, the parent who did his own investigation and filed the federal complaint, said it was "reprehensible" how FCPS leaders handled the matter. He believes there never was an investigation.

Both Fitzpatrick and Coach Giannelli told WUSA9 that they were never interviewed by school officials Fitzpatrick says a FCPS investigator called her asking questions about the two-year olf case yesterday.

The Washington Post first reported this story in the summer of 2017.